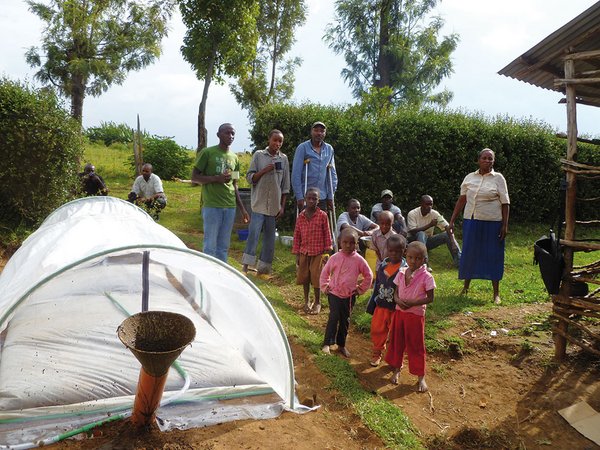 Access to modern renewable energy services are a key input to poverty eradication and in ensuring food security. Biogas is a renewable energy option suited to provide clean, modern and decentralised sources of energy. Portable systems, such as FlexiBiogas, offer a lot of advantages over traditional fixed dome systems.

Today, 2.5 billion people rely on traditional biomass fuels (wood, charcoal, and dung) as their principal source of energy for cooking and heating, and more than 80 per cent of them live in Asia and sub-Saharan Africa. Women are most affected by the consumption of firewood and charcoal. The smoke inhaled from the combustion of these traditional biomass sources causes chronic respiratory diseases and eye infections. The drudgeries related to daily firewood collection lead to back pains and exhaustion. According to the World Health Organization (WHO), more than one million people died from chronic obstructive respiratory diseases (COPD) in 2011.

Since May 2012, the International Fund for Agricultural Development (IFAD) has been assessing the potential of renewable energy technologies (RETs) to provide clean, modern and decentralised sources of energy. One of the promising RETs identified is the new-generation portable biogas systems, such as FlexiBiogas, developed by the Kenyan company Biogas International Limited (BIL).

These systems have been installed as part of a project titled Making Biogas Portable: Renewable Technologies for a Greener Future, under the Initiative for Mainstreaming Innovation. The initiative is funded through IFAD by the UK Department for International Development. IFAD has also facilitated South-South co-operation between Kenyan engineers and the Indian Institute of Technology (IIT), which has provided a platform for scaling up the system internationally.

The potential of biogas

Biogas is a renewable energy obtained from biodegradable organic material such as kitchen, animal and human waste. Cost-effective technologies like biogas systems can stem methane emissions from livestock manure by recovering the gas and using it as an energy source. The organic material is inserted into a sealed digester, and in the absence of oxygen, anaerobic bacteria consume the organic matter to multiply and produce biogas which can be piped directly to a cooking stove.

In most of sub-Saharan Africa, biogas technologies (fixed dome and floating drum digesters) have been available since the 1950s. These two main types of biogas system, which have been implemented around the world, require large quantities of bricks, concrete, and steel, making transportation to rural areas costly. Their construction depends on land security, skilled technicians, transport and logistics of building materials, all leading to significant initial investment costs of a thousand US dollars or more.

It is estimated that at least 18.5 million African households have the technical potential to implement biogas digesters, and yet adoption rates remain low.

Biogas International (BIL) has installed 200 FlexiBiogas systems in Kenya since 2011. Since  April 2012, IFAD has worked in partnership with Biogas International to install nine systems on dairy farms as part of the IFAD-supported Smallholder Dairy Commercialisation Programme in Nakuru and four systems in an orphanage school in Naivasha. At the school, the systems use kitchen and human waste to produce electricity for lighting and to provide Internet access.

The FlexiBiogas system is portable and expandable. It has a shorter retention period (the time it takes for organic material to break down) than fixed dome systems. It consists of a plastic digester bag, similar to an open-ended pillow case, housed in a greenhouse tunnel. The tunnel acts like an insulated jacket, trapping heat and keeping the temperature between 25 and 36 degrees Celsius. The combination of the tunnel and the plastic bag increases the volume of gas production and reduces retention time, ensuring a high rate of fermentation and gas production.

The system has a comparative advantage over other biogas digesters in rural areas as it can be transported easily on a bike or donkey to remote areas. Neither does it require skilled labour such as bricklayers. The unit can be installed by merely flattening the ground as opposed to transporting gravel, stones, bricks, sand and cement, and it begins to produce sufficient volumes of biogas faster than other systems.

In other words, the FlexiBiogas system has the potential to tap into rural markets where firewood consumption at household level is highest and leads to increased deforestation and land degradation. With the adoption of biogas, methane emissions, which are 22 times more damaging to the global atmosphere than CO2, can be reduced through better livestock manure management. In addition, the bioslurry is a good alternative to chemical fertilisers and can support the rebuilding of soil health and reduce dependence on fossil fuels.

A whole range of benefits

Lessons learned from the adoption of FlexiBiogas biosystems have been gathered throughout the past two years with the collaboration and support of IFAD investment projects in Kenya, Rwanda, Orissa/India, and in São Tomé e Príncipe. The new systems are proving to be a significantly better alternative than fixed dome systems.

Environmental benefits. From an environmental perspective, the initiative seeks to address climate change mitigation and adaptation activities by reducing the level of greenhouse gases released into the atmosphere. The main environmental benefits are reduced firewood consumption at household level (2 kg per day) leading to decreases in deforestation and land degradation and reduced methane emissions from better livestock manure management.

Bioslurry is a good alternative to chemical fertilisers and can support the rebuilding of soil health. One underestimated income generation opportunity is the promotion and use of organic fertiliser (bioslurry) from livestock, kitchen and human waste produced by the digesters which can increase soil fertility and reduce environmental degradation (soil erosion and deforestation) and therefore ideally contribute to higher crop yields.

Socioeconomic benefits. The results of the studies show that a regular supply of biogas has reduced the daily task of gathering firewood (especially for women and girls). On average about two hours a day are saved, providing more time for women and girls to engage in other activities such as handicraft manufacture, livestock maintenance, attending to chores, study, play and rest. The technology is user-friendly, allowing illiterate farmers to install, maintain, operate and troubleshoot effectively.

Studies in Kenya and Rwanda also note that on average, each farmer in the two countries has extended his or her cropping by 0.5 hectares because of the additional time made available. Evidence shows that it became easier to cook during the rainy season, when the kitchen was transferred indoors to protect the biogas stove. This is facilitated by the fact that no bad odour is associated with FlexiBiogas as it digests 100 per cent of the organic substrate. Nor does it attract flies.

Technical benefits. Based on research and field surveys in Kenya and Rwanda, it was documented that traditional fixed dome systems are more expensive (1,200 to 1,800 US dollars) and require three to six dairy cattle. Ownership of land is a further pre-requisite, and skilled labour is needed to install, maintain and operate the biogas unit efficiently if long-term sustainability is to be ensured.

The main technical advantages of FlexiBiogas systems include:

Health benefits. The studies document that the FlexiBiogas systems lead to reduced chronic obstructive pulmonary diseases (COPDs) and eye infections by eliminating smoke from the kitchen. The daily diet can be improved through better home gardening using bioslurry as a fertiliser leading to improved nutrition. Adopting FlexiBiogas may also improve homestead sanitation as a result of better management of livestock manure.

The goal of promoting FlexiBiogas by IFAD is to foster clean, modern and decentralised sources of energy as an alternative to traditional biomass sources such as firewood and charcoal for cooking and kerosene for lighting.

With just one or two cows in an integrated farming system, the Flexi­Biogas technology can provide 60 to 100 kilogrammes of high-quality fertiliser, 1.2 cubic metres of biogas daily for cooking and 12 litres of milk. IFAD’s pilot project has opened up new channels and potential partnerships for globally testing the ‘One Cow model’.

One cow produces 15 to 30 kg of dung every day. Estimates suggest that about 20 kg of fresh cow dung will yield 1,000 litres of cooking gas in the FlexiBiogas system, enough for a household of five to seven members. Adding an extra 20 kilogrammes of dung to the system will run a 5-horsepower engine for one hour. This could be coupled to an automotive alternator, which will charge a battery (using a chaff cutter) and a converter to run small items such as lights, a computer or a television set.

In the long run, potential environmental risks must be considered in the case of a more large-scale introduction of FlexiBiogas systems. Firstly, the long-term impact of the heavy use of plastic and lead acid in automotive/solar batteries must be considered. Secondly, the actual reduction in firewood consumption in rural areas is inconsistent. Although a large majority of users do in fact use firewood significantly less, some still prefer firewood for cooking. In other instances, although farmers realise that they no longer need to use firewood, they still sell bundles to their neighbours as a source of income.

Nevertheless, the ‘One Cow model’ has the potential to create employment in rural areas and address two of the major problems in sub-Saharan Africa, nutrition and the availability of renewable fuel, as well. IFAD is also playing a crucial role in diffusion and scaling-up of proven strategies for strengthening national and regional policy frameworks. The biogas compression and bottling model that IFAD is piloting in Kenya jointly with supplementary financing from the Government of Finland is fostering regional and local renewable energy industries through capacity building of entrepreneurs, thus stimulating investment in the renewable energy sector and opening new frontiers for business development.