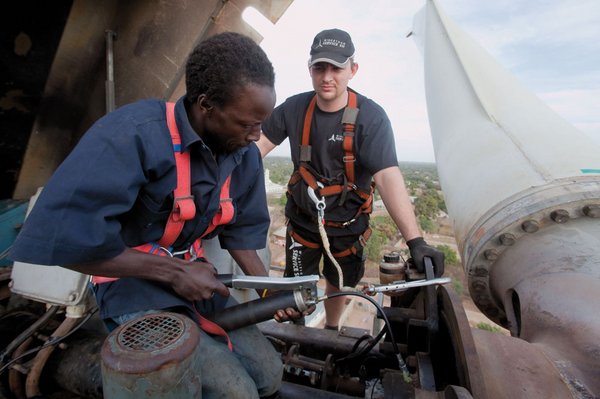 In 2009 a refurbished turbine from Europe became Gambia’s first wind-power plant. Now two more are being connected to the electricity grid, underpinning the small country’s pioneering role in the face of considerable resistance to the use of wind energy in the West African region.

Thirty metres above ground-level on the nacelle of West Africa’s first wind turbine, all is well with the world. A fresh breeze blows over the village of Batokunku in Gambia. Fishermen row their pirogues parallel to the coastline, casting nets to catch barracudas or red snappers. Looking down on the densely populated coastal region, the thinly wooded landscape looks greener than it really is on the ground at the beginning of the dry season.

Muffled reggae music is coming from the Nissan pick-up parked at the base of the turbine. The truck belongs to a firm called Global Energy. The small company with the big name has the service contract for the 150 kW turbine originally made by Bonus Energy, Denmark’s pioneering wind-turbine manufacturer – now part of the Siemens conglomerate – and installed here three years ago. A real challenge, because servicing wind turbines is completely new territory in this part of West Africa. And the Batokunku turbine has already given a lifetime of previous service: it harvested European wind at Nysted in Denmark for many years before it was stowed in a container, shipped to Africa, and given a second lease of life.

“We like the job,” says the firm’s Dutch boss Milko J. Berben, who has lived and worked in Gambia for more than ten years. In the past, his team of fitters mainly serviced diesel engines, repaired ships’ machinery and carried out other installation jobs, but nowadays they are more and more involved with wind energy. The pioneer turbine will soon be followed by two more second-hand units from Germany, each with a capacity of 450 kilowatts and due to be erected in the next few months in the coastal settlement of Tanji, just a few kilometres to the north of Batokunku; a challenge that the people from Global Energy accept with relish.

The starting point for this remarkable development in Gambia, a country of one-and-a-half million inhabitants, is the commitment of one individual. “Peter has done so much for us,” says Ebrima Touray of the Batokunku village committee emphatically. She is talking about the efforts of Peter Weissferdt. The 70-year-old electrical engineer from Kiel in Germany moved to Gambia a few years ago with his wife Gitta. Being a well-known character in the German wind-energy scene, his mind soon turned to harnessing the energy of the wind in the West African country he has chosen as his home.

When the first second-hand turbine was erected at the start of 2009, this idea became a reality – after years of troublesome planning and seemingly endless negotiations with the state energy supplier Nawec. Only a Public Utilities Regulatory Authority (PURA) appointed during the process by the Gambian parliament finally turned the tide, and overrode the energy company’s stonewalling attitude towards the wind-power project. It forced Nawec to allow feed-in to the grid and to authorise the operation of a local network. “Nawec is one of these typical state enterprises in Africa which employs lots of old-school bureaucrats, who are simply afraid of making decisions on anything new,” Peter Weissferdt comments on the monopoly that, until now, has controlled Gambia’s energy and public water supply. Yet the state-run company presides over massive inefficiency; electricity losses in the Nawec grid are appallingly high. Experts think that around 40 percent of the energy fed in is lost within the grid alone, the majority due to cable faults, but theft is also rife when people simply by-pass electricity meters. On top of that, in urban areas only one in two residents is connected to the grid; in rural regions it is just one in four.

A village flourishes – thanks to its own initiative

The village community in Batokunku was spurred on by Weissferdt to take its destiny in its own hands and lay its own network of electricity cables and water pipes as part of the wind-power installation project. Both the electricity and water supply networks as well as the 150 kW wind turbine are now self-run by the local council and the non-governmental organisation Batokunku Rural Electrification. A five-person committee oversees the turbine and the village network, and takes all operative decisions. “It has enabled us to have light in our houses, buy fridges, open a cinema; manufacturers bought sewing machines, others are running small electric oil-presses. It’s a completely different life from before,” says village committee member Touray. “That’s why we hope to have a school here soon as well.” The necessary money will be raised by the wind-energy plant: for a five-year term, the state energy company has undertaken to pay 80 percent of the consumer tariff per kilowatt-hour generated: currently, that converts to about 18 eurocents. The “father” of Gambia’s first wind energy plant is unashamedly gratified by this tariff. “The pennies are steadily trickling into our village fund,” says a smiling Peter Weissferdt.

Wind energy in Africa
Worldwide installed wind-energy capacity crossed the 200,000 megawatt mark in 2011. China, the USA, Germany and Spain are the global market leaders. So far, progress in Africa has been modest at best. According to figures from the World Wind Energy Association (WWEA), installed capacity for the entire African continent was precisely 906 megawatts by the end of 2010. The lion’s share is produced in just three countries: Egypt, Morocco and Tunisia, which have a combined capacity of 890 megawatts. The remaining capacity of 16 megawatts is dispersed across South Africa, Nigeria, Cape Verde, Ethiopia, Namibia and now Gambia, although the WWEA expects the addition of another 700 megawatts by the end of 2013. What is called for, particularly in countries south of the Sahara, is a fundamental overhaul of the energy policy framework so that wind energy – including smaller-scale installations – can really get off the ground in rural regions.

The tariffs for the two new turbines that will shortly arrive are not quite as good. The future operating firm Gamwind Ltd. has a separately negotiated contract with the supplier Nawec, and will receive the equivalent of 14 cents per kilowatt-hour for the first five years of operation. “It’s not quite as much as we hoped, but it’s still very good,” says Björn Schäfer of the firm Windstrom Service SH from Schleswig-Holstein in Germany, which owns a 51 percent stake in Gamwind Ltd. Windstrom Service SH, a mid-sized company specialised in the repair and servicing of older turbine models, was already involved in erecting the 150-kW Bonus plant. As one of the future operators of the two 450-kW Bonus plants, once again it will coordinate the installation work side by side with Milko J. Berben’s team. For Schäfer, the assignments in Gambia are a fantastic change of scene. He is most inspired by the country’s positive mood: “Even the President is getting behind wind energy.”

Schäfer thinks the use of second-hand turbines in countries like Gambia makes perfect sense. “What do I want with a high-tech plant that nobody local can maintain?” is his simple reasoning. “In any case, only wind farms of ten megawatts or more can reliably get hold of replacement parts for new plants.” So much the same as when the first turbine was installed two years ago, he will probably be found sitting in the mini-substation late into the night pondering how to solve problems with the controls of the refurbished turbines.

One thing is certain: with the two new plants, Gambia will hit the 1-mega­watt mark of installed wind-energy capacity, gaining that much more independence from costly imported petroleum – and, what is more, hoisting the sails for wind power throughout the region.