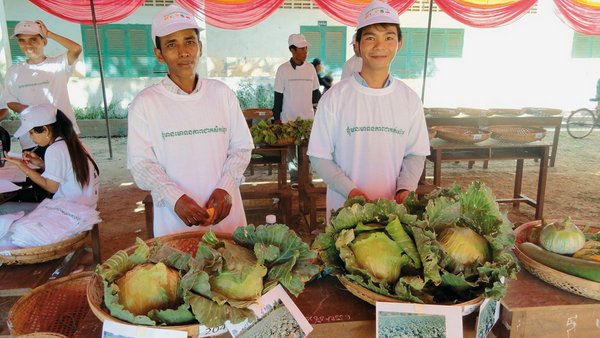 Two participants in the competition category “Vegetables” with their products.
Photo: D. Diehl

Innovation takes place not only in laboratories, and disseminating knowledge need not depend on classrooms. The Cambodian GIZ project “Best Farmer 2012” is an example of how achievements of small-scale farmers can be appreciated and their co-farmers can simultaneously benefit from new insights.

In late 2012, GIZ outlined and implemented the project “Innovation Competition and Agricultural Show (Best Farmer 2012)” in Cambodia. The mission of this project was to bring together rural small-scale farmers in a collaborative manner to learn from each other’s capabilities and to celebrate rural live and the value of villagers in Cambodian society. In total, GIZ ran three shows in the Kampong Thom district in central Cambodia in December 2012. The aim was to create a public platform where small-scale farmers’ achievements are presented and honoured and which, in contrast to other competing exhibitions, is open to all interested participants and not driven by commercial interests. Also, best-practice and knowledge exchange between local small-scale farmers was to be realised as well as the creation of linkages between the public and private sector. Finally, the events sought to strengthen farmer-driven innovative development by publically rewarding the most successful farmers via radio/TV broadcasting. Beside the competition and show, an informal setting was created to foster mutual exchange of knowledge and experience among farmers. Farmers and villagers were invited by radio broadcast, mobile promotion, leaflets and posters. Different local NGOs were also involved, which encouraged their network to participate. Public areas providing sanitary infrastructure and display facilities, such as school grounds, were chosen as locations.

The project comprised three major segments (see Figure below), each including different aspects and sub-categories. The core element of the process was the agricultural competition. Here, each object on display was individually assessed by a jury of independent judges. The winners were subsequently interviewed on stage to share their knowledge with the audience. Media representatives recorded the interviews. The categories (see Figure) as well as the respective decision criteria were designed in an expert meeting prior to the first event. As a price for successful candidates, agricultural material was handed out with a water pump including pipes as first prize. In addition, prizes donated by companies displaying in the agricultural show, were awarded to special winners (e.g. vegetable fertilisers for the winners of the vegetable competition). The number of participants in the crop modules was higher compared to the livestock segments due to transportation challenges and risks (e.g. cow vs. carrots).

Complementary to the competition, private companies and retailers were invited to display their products in an agricultural show, highlighting new farm products, allowing innovative farmers organisations to reach a wider audience (e.g. farmers associations) and enabling farmers to achieve lower prices as middlemen in the villages were cut out. For advertisement, the companies were invited to donate prices for winners of the competition segments.

Finally, the event was rounded off by a cultural festival displaying the local Khmer culture and by involving children in it (e.g. via a drawing competition highlighting life in the village), which proved to be a good way to create further interest among the villagers.

In total, roughly 1,400 villagers participated in all three events together while 500 small-scale farmers joined the competition. In all sub-categories, the best farmers were publically honoured, receiving awards worth more than 7,000 US dollars in total. The success of these events led to joint continuation efforts by the Ministry of Agriculture, Forestry and Fisheries (MAFF), the Asian Development Bank (ABD) and German Development Cooperation (GIZ). In late January 2014, a total of three shows were realised in rural Cambodia, additional ones will follow (see link at the end of the article).

Scientific progress is always a learning process. Nevertheless, agricultural science has so far tended to be developed at the (inter)national level, with knowledge dissemination as a final step out of the ivory tower. Scientists such as Tilman (2002), Lwoga (2012), Nathaniels (2000) and Lado (1998) try to overcome this model by arguing for an improved agricultural science process, characterised by a continuous and active exchange of information between scientists and practitioners. One reason for this is that small-scale farmers’ innovations and techniques are characterised by being mainly organised and accumulated through experience and the respective isolated application. And although farmers and practitioners contribute to a “body of knowledge” on sustainable agriculture, they often lack capacity to document and/or systemise their findings which hinders dissemination and scaling up processes substantially.

In Tanzania, for example, indigenous agricultural knowledge is acquired and shared within a weak network only, resulting in frequent knowledge losses. Furthermore, the example of seed fairs revealed a strong interest on the producers’ side to learn new methods and try out new alternatives, with this being based more on a community’s or individuals’ own ingenuity than on external expertise. In this context, the international scientific project Trans-SEC (www.trans-sec.org) was launched in May 2013, aiming at the identification and testing of innovative and best practices along the small-scale agricultural value chains, with the respective knowledge transfer and adaptation as well as optimisation in accordance with local conditions. The responsible scientists at ZALF are in the process of outlining and publishing a concept to utilise the Cambodian experience as a blueprint for the scientifically adequate identification of agricultural forerunners on the one hand and simultaneous knowledge dissemination on the other. Although short-term application is determined in accordance with financial and time restrictions, the design and publication of a respective concept will help to foster the formulation of e.g. competition criteria and overall challenges and restrictions in the long run.

There are still hurdles to overcome and blueprints to be designed in detail before such a framework is applicable in a wider geographical focus. First, a sustainable financial framework needs to be installed as the Cambodian event still costs 24 US dollars per participant. This might be achievable via integrating local authorities financially or via sponsoring by private companies. Second, and what is especially interesting from a scientific angle, there is the design of a general framework for the reproducibility of these events and subsequent local adaptation. In Cambodia, for example, cows, pigs and chicken were chosen as major categories of the competition, with height and weight being important criteria. However, the lesson learnt is that local breeds are not able to compete with imported breeds when these criteria are applied, despite their being better adapted to the Cambodian setting. Another example includes the involvement of fruits and caretaking of fruit trees in the competition.

Generally, the “Best Farmer 2012” project revealed that a focus might be upon local varieties, adapted cultivation methods as well as the status of crops (hulled vs. de-hulled). In livestock-related competitions, age, sex and especially purpose of production should also be integrated in an evaluation system. Furthermore, this concept holds the potential to display achievements of socially excluded groups, such as women-headed households, in individual competitions. Potential amplification might also be achievable by explicitly combining this concept with a seed fair concept, as outlined by Nathaniels (2000). However, close monitoring is required to ensure that negative effects and implications of nation-wide agricultural shows are avoided. These events are predominantly designed for so-called progressive and commercial farmers, and they tend to neglect minor crops, focus on formal scientific achievements and, especially, undermine local knowledge and traditional local cultures.

Lado, C. (1998): The transfer of agricultural technology and the development of small-scale farming in rural Africa: Case studies from Ghana, Sudan, Uganda, Zambia and South Africa. In: GeoJournal 45: 165-176.