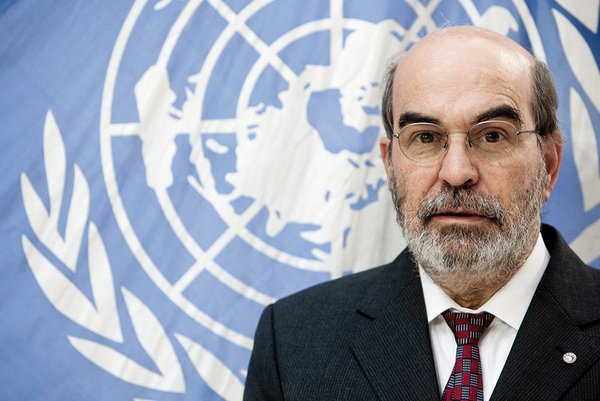 “Family farms are key to feeding the world”

José Graziano da Silva, Director-General of the United Nations Food and Agriculture Organization (FAO), on the role of family farms for global food security, the need for sound rural development stategies and the responsibility of governments, the private sector and civil society.

Mr. da Silva, why did the United  Nations declare 2014 the Inter­national Year of Family Farming? What is this meant to achieve?

The declaration of the International Year of Family Farming reflects a growing global consensus that family farming is key to feeding a global population that is expected to reach more than nine billion people by 2050. There are over 500 million family farms spread across the planet, and they are responsible for at least 56 per cent of agricultural production world-wide.  In many regions, they are the main producers of the food we eat every day. At the same time, around 842 million people around the world are chronically hungry because they cannot afford to eat adequately. Over 70 per cent of the food insecure population live in rural areas of Africa, Asia, Latin America and the Near East. Many of them are family farmers, especially subsistence farmers, with limited access to natural resources, finance, credit and technology. These conditions prevent them from fulfilling their true potential.

However, with an enabling policy environment, we know that family farmers can boost productivity and foster sustainable local production and consumption circuits which have the potential not only to fight hunger, which is our main objective, but also to boost local markets while sustainably managing natural resources. The International Year was initiated with the understanding that it will create a unique opportunity to develop means for prosperous and sustainable agriculture based on family farms. It is a call to governments, civil society, the academic community and the private sector to unite their forces, increase their understanding of the potential and challenges faced by family farmers, and take concrete action.

How does the United Nations define ‘family farms’?

Most family farms are small farms – in fact the vast majority of the world’s farms are smaller than two hectares. However, family farmers are an extremely diverse group, ranging from smallholders to large farm owners, indigenous peoples, fisherfolk, forest farmers, pastoralists and many others.

At FAO, we have adopted a definition to facilitate policy dialogue throughout 2014 which describes family farms as all family-based agricultural activities. That includes all agricultural, forestry, fisheries, pastoral and aquaculture production which is managed and operated by a family, and is predominantly reliant on family labour, including by both women and men.

I think this definition has proven valid as a starting point for facilitating policy dialogue so far that is allowing us to use the International Year of Family Farming to provide momentum for a qualitative step forward for policy and analytical purposes. This is being done, for example, by achieving common international criteria to facilitate definitions and typologies of family farming at country and regional level. This step would facilitate the identification of effective ways to support family farming in its diversity. Governments, for instance, are in need of clear criteria so that they can gather adequate statistics on the economic and demographic dimensions of family farming in order to enhance pro-family farming policy initiatives. Furthermore, concerns are being voiced over the ‘invisibility’ of women’s participation in agricultural activities, income and tenure, or how to adequately capture the commonalities and diversities of family farms operating in various agro-ecological regions and social, economic and cultural contexts. FAO is addressing these demands with the aim to deliver criteria and improved knowledge about family farming on a permanent basis.

Does family farming represent a model for the future of all regions throughout the world?

These numbers speak for themselves. If we want to feed over nine billion people in 2050, family farming needs to be part of the equation. Neither is there any doubt that an increase in productivity for poor small-scale family farmers will result in better food security. One important aspect to stress is that we are obliged to increase productivity while preserving natural resources and protecting biodiversity. In this regard, one major asset of family farming is that it tends to run crop-diversification-based agricultural systems, which are essential for safeguarding biodiversity and contributing to healthier and more balanced diets.

What are the main challenges that family farms face world-wide nowadays? And – as a consequence – what kind of support do they need to be ready for the future?

Climate change is introducing a host of new challenges not just for family farms, but for the entire world agricultural sector and for humanity in general. The degradation of land and water resources and the loss of biodiversity are already taking a toll on farming systems. Together with population increase, this has created enormous and competing pressures for different land uses.
I think that multi-stakeholder dialogue that builds consensus and facilitates concrete action is the answer. In this regard, the Voluntary Guidelines on the Responsible Governance of Tenure of Land, Fisheries and Forests endorsed in 2012 by the Members of the Committee on World Food Security (CFS) sets an important precedent: internationally agreed-on guidance on what needs to be done to ensure that the use of natural resources support our food security goals. FAO played an important role in the debate that led to the approval of these guidelines and involved governments, private sector and civil society organisations among other actors, and we are working with dozens of countries to ensure their adequate implementation. The Principles on Responsible Agricultural Investment, which are currently being discussed in the CFS, will be an important complement to the Voluntary Guidelines given the impact that investments may have – for better or for worse – on the food security of poor and developing countries.

I also want to stress that we need to pay special attention to women and young farmers. Often, the important role women play in family farming is not recognised in terms of income earned, asset ownership and succession. Men have more access to services than women. There is a need for information and awareness campaigns about women in family farming to fill this gap. Another concern is that in many areas youth are losing interest in agriculture and instead are looking for jobs in urban areas. Governments need to invest more in rural areas and in agriculture. There is a need to develop programmes and projects that target young farmers specifically and provide them with access to land, credit and technical knowledge. I think that a rural development strategy, and not just an agricultural one, will meet this challenge. Access to adequate goods, services, job opportunities and leisure opportunities would convince more youth to stay closer to the family farm.

What do you expect of the national governments? And what should the international community do?

Focusing on national policies for agricultural and rural development is of the utmost importance. Facilitating access to land, water and other natural resources and implementing public policies with regard to credit, technical assistance, insurance, market access, public purchases and appropriate technologies are key actions to be implemented by the governments. They need to ensure that this contribution is fully recognised by establishing platforms for dialogue with family farmers’ organisations, which are necessary to generate consensus and to build and implement targeted, effective policies and result in tangible improvements. Meanwhile, international co-operation can be fundamental in channelling resources to support country-owned pro-family farming strategies, and international agreements can be instrumental in enhancing these strategies. The combination of national strategies, social dialogue and international support form the enabling policy environment that we need.

What will have changed in concrete terms for family farmers by the end of 2014? What are you hoping for?

What we hope for by the end of the year is to have the current and potential contribution of family farming to food security recognised by all sectors and supported by the development of agricultural, environmental and social policies that enable sustainable family farming. In the past, family farmers have been considered a problem to be solved, but we need to change that mindset so that they are seen as part of the solution for global food security and sustainable development.