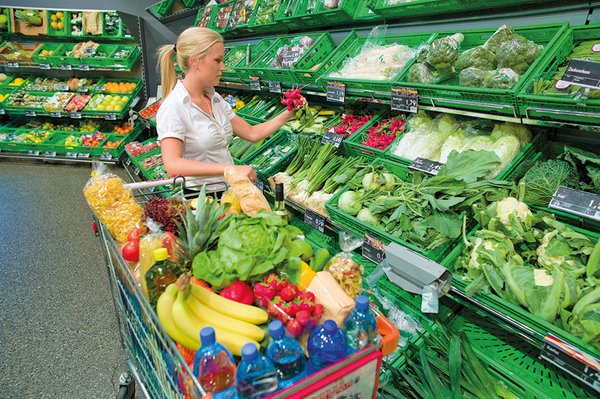 More and more people want to know where their food comes from and how it was produced and processed.
Photo: Bilderbox.com

Civil society organisations across the world have boycotted the UN Food Systems Summit, claiming that its preparation is undemocratic, that it lacks ambition in ending structural inequalities and that it is not a suitable forum for setting the right course towards the future. With their alternative “Food and Democracy” dialogue series, which is independent of the Summit, German NGOs have invited stakeholders from a variety of sectors to share their experience and discuss how to make future food systems fair, healthy and autonomous, with climate justice built in.

“Food systems have the potential to nurture human health and support environmental sustainability, however our current trajectories threaten both,” is how scientists sum up the situation in the EAT-Lancet report. The EAT-Lancet Commission is a high-level body bringing together 37 scientists from 16 countries to answer the question: how can we feed a future population a healthy diet within planetary boundaries?

First the good news: a growing number of voices worldwide want to radically transform our food system and make global production and consumption more sustainable. Many more people are now taking an interest in what’s on their plate, where it comes from and how it was produced and processed. They want to know what’s in their food and are turning away from unhealthy, over-processed foods that are high in salt, fat and/or sugar. Many farmers would like more autonomy and are keen to break free of their dependence on agricultural corporations, importers, middlemen and supermarket chains. They want more self-determination, more contact with the consumer and good, fair and appropriate prices for their products. Rural workers want to break out of their marginalised, exploitative employment that pays starvation wages. Across all sectors of the food system, people are now demanding a voice and, not least, the democratisation of our food and agricultural policy. In response to this need, a multitude of alternative agricultural organisations, action groups, networks and coalitions has emerged – in all food system sectors.

At present, however, these many significant voices are rarely given a hearing or included. That certainly applies to this year’s UN Food Systems Summit. Critical voices from science and civil society fear that the outcomes of the Summit are more likely to reinforce than resolve the catastrophic misalignments in our current food systems. Key points of criticism have been raised in several open letters signed by some 500 organisations. An appeal by the scientific community for a boycott of the UNFSS, which has already been signed by more than 200 scientists, has also been ignored so far. Even the high-level International Panel of Experts on Sustainable Food Systems (IPES-Food) exited after the first day of the Pre-Summit.

And yet another way is possible. Agro Coordination, the INKOTA Network, FIAN Germany, the Network of Food Policy Councils and the German Forum on Environment and Development have taken the Summit as an opportunity to launch a self-organised, alternative dialogue series, which is independent of the official Summit, in order to work with multiple stakeholders on a concept for a future sustainable food system. The underlying idea is to bring together a range of initiatives to share experience and engage in discussion. Which initiatives are already working well? What made it possible to initiate change? Where have local policy-makers successfully supported these projects, and where are there barriers to overcome?

All viewpoints are included

Thus far, three dialogues have taken place with around 400 participants. They have included representatives of the agricultural production, processing and distribution sectors, the hotel and catering industry, environmental and climate organisations, and advocates of healthcare and social affairs such as co-determination. The invitation to dialogue offered participants the opportunity to present their initiatives and share their experience, but also to discuss contentious issues. The aim was to foster a dialogue with people who are actively involved in a range of food system sectors; after all, they know best where change needs to happen and what the most urgent issues are.

The contributions were as diverse as the food systems themselves. One topic of discussion, for example, was how successful concepts such as agroecology can be developed and utilised to support food system transformation. It became apparent, in this context, that more knowledge of alternative production and marketing methods, solidarity-based agriculture and agroforestry systems is needed in agricultural studies programmes at universities and in the chambers of agriculture.

Within the food systems themselves, regional marketing channels are gaining in importance. Consumers are becoming increasingly influential, thus enhancing transparency and inclusion, notably in food retail: the development of WirMarkt, a transparent and democratic food market in Hamburg, is one example. Nicolas Barthelmé from the “Du bist hier der Chef” (you're the boss) consumer initiative showed how consumers can use their voice to influence price-setting and how a genuine dialogue can emerge between retailers and farmers, preventing the commercial sector from imposing dumping prices.

A stronger focus on marginalised groups

It is clear that in transforming our food systems, there needs to be a particular focus on marginalised groups: action is urgently needed here. Benjamin Luig from the European Migrant Workers Union emphasised that the rights of seasonal workers must be strengthened as a matter of urgency. At least one third of Germany’s agricultural employees are seasonal workers from countries such as Romania and Poland; they are still excluded from the social welfare system and their employment conditions are often precarious.
With its “Alle an einen Tisch” (Everyone at the table) project, Berlin’s Food Policy Council brought the key topics of inclusion and food poverty into the dialogue. For broad swathes of the population, good-quality, healthy food is out of reach. Among other things, low welfare benefits make it almost impossible to exercise the right to adequate healthy food. The coronavirus pandemic has cast this need into particularly sharp relief. And yet despite the great relevance and importance of this topic, it rarely features in the political debate. Topics such as these should have been included on the Summit agenda, along with the voices of those affected, in order to establish a basis for transforming food systems in a way which can achieve a genuine improvement for those whose human Right to Food is currently being violated.

A plea for alternative decision-making processes

The challenges that we must address in this context were identified by the speakers in their introductory inputs. Professor Regina Birner from the University of Hohenheim pointed to problems in food system governance in Germany. The increasing concentration in the upstream and downstream sectors of agriculture, the influence of lobbyists in politics, the often poor communication with society at large and civil society’s occasional polarisation of the debate are factors currently obstructing the necessary change, she said. Often, this leads to tokenist policies that leave important topics such as food poverty out of the equation. As a co-author of the report “Promoting Sustainability in Food Consumption” by the Scientific Advisory Board on Agricultural Policy, Food and Consumer Health Protection (WBAE) of the Federal Ministry of Food and Agriculture (BMEL), she provided important impetus for further discussion and presented the argument for alternative decision-making processes in politics, such as consensus conferences or citizens’ panels, that genuinely represent the majority opinion within the country.

The importance of participation and collective action was underlined by Antônio Andrioli, Professor at the Federal University of Fronteira Sul (UFFS), in his report on the development of an agroecology movement in southern Brazil. Over the last ten years, a coalition of smallholders, farmers’ organisations and scientists has enabled the establishment of local food systems, which proved their worth during the pandemic. Despite the lack of school meals and the closure of markets, food distribution continued and a large number of families were supplied with healthy foods.

Given the absence of any financial support and the growing pressure from the Brazilian government, however, Andrioli is concerned about the future of the movement. Key programmes to support family farming have already been cancelled to make way for the expansion of soya cultivation and agro-industrial livestock farming. The Landless Workers’ Movement (MST) and women’s movements in particular face discrimination and are sidelined in project tendering processes and research. Andrioli reported numerous difficulties at the six UFFS campuses as well. Not only is the government cutting their funding; it is also attempting to discredit critical scientists. Many academics are struggling to maintain their independence and to continue including agroecology in agricultural training programmes.

The diversity of contributions to the alternative dialogue series showed how many stakeholders are already engaged in building a healthier and sustainable food system and improving conditions for communities, landscapes, soils, flora and fauna while also striving for social change. There is a great deal of knowledge available – and a great desire for dialogue, networking and shared learning. It would have been beneficial if these voices had been heard by the German Government, not least in relation to its participation in the UNFSS, and if there had been more balance in the allocation of roles in the national dialogues organised by the BMEL. Ahead of the Summit, all member states were supposed to hold national dialogues with food system stakeholders. The BMEL launched this dialogue process at a comparatively late stage, namely in June, by which time the German Government had already agreed its positions. It seems that previous criticism of the UNFSS processes and structures was not considered in the planning of the national dialogues. The dialogues themselves involved a limited number of participants and the process lacked transparency; it was not clear, for example, which criteria were used to select participants. It was also unclear which dialogue outcomes the Government intended to feed into the UNFSS, and how this would be done. And it was impossible to determine whether there was the option of participating in an observer role or if national dialogue participants’ boycott of the UNFSS would be made visible in the outcomes, in order to convey a realistic impression of the prevailing mood. Sadly, the German Government missed a significant opportunity here.

Lena Bassermann is a Global Food and Agricultural Policy Advisor with the INKOTA Network in Berlin, Germany.
Contact: bassermann@inkota.de