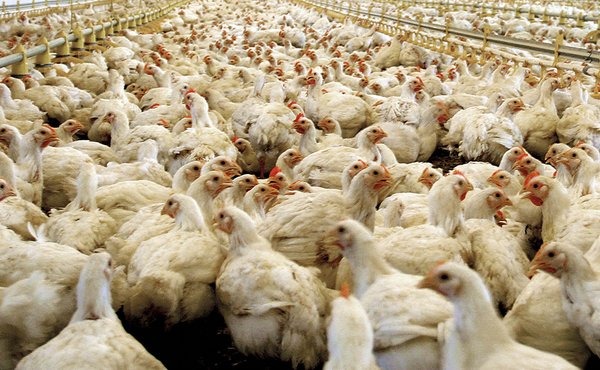 Trade in agricultural products is of considerable importance to the economies of most African countries. Imports often play an important role in feeding a growing population. At the same time, they exert competitive pressure on internal production and therefore also put food security at risk. Here, it is the European Union that has above all been at the centre of criticism over many years because of its agricultural policy. Is this justified? With an account of poultry meat exports to West Africa, our authors show that there are no simple answers to this question.

Over the past ten years, poultry meat exports from the EU to West Africa more than doubled – reaching 274 million tons in 2015. Accounting for 50 per cent of all EU poultry exports to West Africa, Benin is the main target, followed by Ghana. But overall, the exports to West Africa only constitute slightly more than ten per cent of world-wide poultry meat exports from the EU. The Netherlands, Poland and France are the most important countries of origin within the EU.

The West African states themselves export only little in the poultry sector, and most of it is traded within the region itself. For example, to a small extent, Ghana above all exports live chicks to Liberia, Sierra Leone, Cameroon, Benin und Uganda.

Often, local poultry meat production in West Africa is insufficient for protein supply to the region’s constantly growing population, which, at around three per cent, is experiencing the highest population growth world-wide. While local production has doubled in Ghana since 2002, per capita consumption of poultry rose so strongly – from 9.5 kilograms per capita and year in 1995 to 10.5 kg/per capita/per year in 2005 – that imports had to be raised. According to the World Hunger Index, the national food supply situation is generally poor.

One chief obstacle to increasing local production is deficits in animal health – stocks are often threatened by animal epidemics. High energy prices are a second factor, and they impact e.g. on establishing and maintaining cold chains. And then there is the high cost of animal feed. All this results in the world market prices often being significantly lower than the local prices, which also tend to differ within a country depending on the different local markets. However, Ghana has succeeded in enhancing its competitiveness. In 2011, the import price of poultry was just shy of 50 per cent of the local price – compared to 60 per cent in 2008.

After nearly ten years of negotiating, the EU and the Economic Community of West African States (ECOWAS) concluded their Economic Partnership Agreement (EPA) in June 2014, which is one of a range of different regional EPAs with African, Caribbean and Pacific countries.

It grants the African partners completely free access to the EU market. This offers African countries new opportunities, especially in the area of further processed agricultural products whose access to the EU market was previously limited. However, the EPA does bear risks as well, for to comply with world trade regulations, the partner countries also have to open up their markets for the first time – albeit to a lesser extent. This might lead to an increase in imports that could impair local markets. While the EPA provides a number of instruments to avoid negative impacts on African domestic production (see Box), particularly with regard to food, it will yet have to prove their worth in the course of implementing the agreement.

Scope for the protection of domestic production and food security in the
ECOWAS EPA
• Exclusion of sensitive products from liberalisation, i.e. tariffs often remain for agriculture products (Art. 10)
• The safeguard clause (Art. 22) provides for the reintroduction of tariffs if local production is threatened
• Flexible tariff protection has to be an option for emerging industries (Art. 23)
• Tariff protection is possible to maintain food security (Art. 47)
• Market liberalisation can be adapted to facilitate regional integration measures (Art. 12)
• A review of the agreement’s impacts is provided for (Arts. 2, 57 and 61)
• Countervailing duties can be imposed to address trade-distorting subsidies (Art. 20)

But what is now going to happen in concrete terms of border protection once the EPA enters into force? Within the EPA, tariffs on chicken parts belong to those products excluded from abolishing tariffs. So the tariff applied so far will continue to be valid vis-à-vis the EU and also all the other trade partners of the African countries. The EPA commits the EU to refrain from all agricultural export subsidies, although exports of chicken parts to West Africa have not been subsidised for a long time, so that the EPA will not result in any changes here.

With the reform of the EU Common Agricultural Policy in 2003, the previously product-related payments to farmers were tied to the area, so that now, the farm enterprise is supported instead of individual products. While the originally volume-increasing and thus price-cutting effect of subsidies was avoided, all in all, such support also enhances the competitiveness of European producers in comparison to competitors in the developing countries.

In the past, in contrast to other agricultural sectors, poultry production in the EU enjoyed very little support via specific subsidies. On the contrary, subsidies for grain producers even led to higher animal feed costs, putting poultry producers at a disadvantage. However, animal farming was indirectly supported via investment aid e.g. for sheds and pens.

In addition to tariffs, developing countries can also use subsidies to protect their agricultural production, which they do however not often resort to owing to budget limits or other political priorities. Over the last few years, only a small number of African states (such as Malawi, Ethiopia or Senegal) achieved the goal set by the African Union in its 2003 Maputo Declaration of spending ten per cent of the national budget on agriculture.

Frequently, however, the data base is poor, too. The West African countries often fail to notify the World Trade Organization (WTO) of their programmes, even though they are obliged to do so as WTO members. The WTO has defined a wide scope for subsidies that developing countries can also make use of (see Box).

Some West African countries as well as private actors have launched their own aid programmes in the poultry sector:

Ghana has already been supporting its poultry production since the 1960s in various focal areas such as combating epidemics, supporting producer associations or setting up marketing institutions. The Ghana Broiler Rehabilitation Project (GHABROP) was initiated in 2014, the notion being to couple tariff protection with infrastructure measures. It envisaged to replace imported poultry by domestic poultry in processing by 40 per cent. Owing to a lack of administrative capacities it could not be further pursued. At any rate, it is unclear whether giving domestic input preference instead of imports can be contested with WTO regulations. The general agreement on subsidies does not permit prescribing the use of domestic inputs. Other developing countries in particular could contest this regulation if they feared that this was putting their exports to Ghana at a disadvantage.

In Burkina Faso, only in September 2016, a meat processing company based in Côte d’Ivoire (Société ivoirienne de productions animales, Sipra) launched a project establishing poultry production. It remains to be seen whether this will also integrate Burkinabe producers.

Trade relations are complex. Simple solutions will not work in solving the problems emerging from them, as the following examples show.

Import protection alone is not enough. In Nigeria, import flows have been stopped completely by an import ban since 2003, which however has not resulted in a rise in domestic production. Instead, illegal trade has developed (see also online article “The little people always suffer”).

A ban on the exporting side instead would probably not solve the problem either – especially if it was only limited to European export. In the case of Ghana the EU is only the third most important supplier of chicken (50 million euros in 2015), behind the USA and Brazil. However, it would be conceivable for the G 20 to launch a joint initiative to raise the incentive for African domestic production by retaining their exports. However, also for WTO law reasons, this would have to be closely co-ordinated with the recipient countries.

African countries have to prepare comprehensive policy packages. In order to give sufficient incentives to step up domestic production, it is key for the African countries to formulate their own policies corresponding to their own interests. For example, the extent to which domestic production needs to be protected by tariffs has to be discussed in society. Import tariffs put a strain on both the importing firms and on urban consumers, particularly those with a low income who often have to depend on cheap chicken meat in order to cover their protein requirements in their diets. A trade policy measure will therefore always favour one group in society while putting others at a disadvantage. It is up to domestic politics to moderate the decision-making process and define the necessary compensatory measures with each decision taken. All interests have to be taken into consideration – not only the well formulated ones (usually those of the urban importing firms), but also those of the producers in the more remote areas who are frequently unorganised.

However, promoting domestic production also calls for measures to reduce production costs, improvements in infrastructure such as energy, communication and transport, and strengthening quality infrastructure, which has to ensure compliance with safety standards. In the past, for example, the Food and Agriculture Organization (FAO) identified bird influenza outbreaks and not continuously available animal feed as crucial problems in the case of Ghana. In these areas, development co-operation can play an important role. Ghana’s GHABROP was a step in the right direction. However, its failure indicates how important strong local support by respective capacities to assist the actors involved is and what has to be improved for future projects.

Sustainability is called for in consumption and trade. It is consumer behaviour in the EU and other rich industrialised countries that enabled the rapid increase in African imports in the first place. European consumers are buying fewer and fewer whole chickens but are going more and more for chicken breast instead. However, from a business management angle, it still makes more sense to sell remnants at giveaway prices than to throw them away. Here, the United Nations Sustainable Development Goals (SDGs) point in the right direction; they demand changes in consumer behaviour in developed countries. A complete internalisation in terms of pricing of all external effects that poultry production has, including environmental pollution (e.g. through nitrates), would be desirable. This would make the meat more expensive, so that African products would then become more competitive, would reduce consumption and thus linked remnants in Europe and would have a positive impact in the environment into the bargain. The EU ought to consider appropriate measures in the forthcoming reform of the Common Agricultural Policy for the post-2020 period.

Concrete policy measures have to be defined for the respective specific situation of a country, and will always vary depending on the country and the product. As a rule, isolated (trade policy) measures will not be sufficient to secure food, income and employment in rural areas.