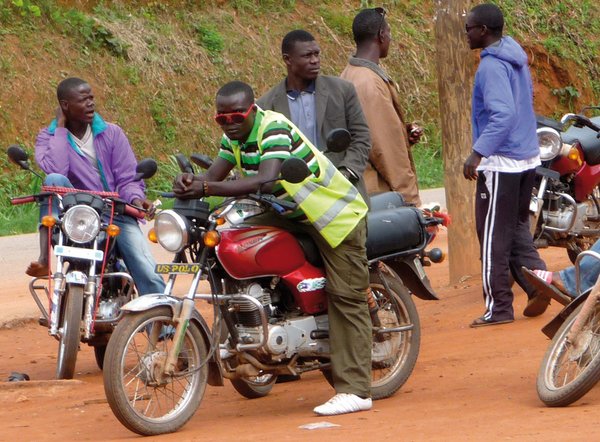 Formal employment is out of reach for many young people in Liberia. Young men often earn money with motorcycle taxis.
Photo: J. Ziebula

Young people are the future. And they need employment. For many African countries, creating these employment opportunities is a challenge, and in post-conflict states such as Liberia the hope for a sustainable peace adds an additional dimension to the task. A team from the Centre for Rural Development (SLE) visited the south-east of this West African country to look at the specific problems faced by young people and what development cooperation can do to help.

Sunnyboy is sitting in the tin-roofed palaver hut in Boundary Town, the settlement in the county of Grand Gedeh where he lives. “Two to three times a week I’m digging gold in the bush with my friends to make some money,” is the 17-year-old’s response when asked what work he does. He spends the rest of his time clearing the community roads of overgrown vegetation, helping to cultivate the small field where the family of nine grows cassava, rice, taro and sweet potatoes, and selling what little surplus is produced. His spare time is spent at the football club or with friends. The scattered settlement is remote: the two nearest towns, where markets and educational opportunities are located, are some 30 kilometres away – even with a motorbike the journey can take up to two and a half hours in the rainy season. Transport is limited: very few young people have a motorcycle, let alone a car. This – and his father’s illness – is the main reason why Sunnyboy is not attending college or pursuing vocational training.

What can stakeholders and development cooperation partners in Liberia do to promote employment for young people? Traditional strategies such as expanding vocational training, gearing training to the labour market and supporting the development of the private sector are one way forward. In addition, the following specific areas of intervention emerged in the course of the study:

• Strengthening young people’s existing self-help initiatives; using youth groups as a starting point for employment-promoting measures, such as promotion of workrelated life skills, or to maintain buildings and roads.

• Improving the opportunities for transporting agricultural products to local markets through cooperation between farmers, motorcyclists and youth groups.

• Setting up childcare facilities at schools and training centres in order to improve women’s access to education.

Sunnyboy’s situation is typical of that of young people in the counties of Grand Gedeh, River Gee and Sinoe in the predominantly rural south-east of Liberia: with formal employment hard to come by, many turn to self-employment and take on a range of different types of work in the informal sector, where jobs are often insecure and working conditions poor. Many young women earn their money through petty trading, while young men drive motorcycle taxis or, like Sunnyboy, hire themselves out as gold diggers or day labourers. Almost 60 per cent of young people state that they are engaged mainly in farming. Long-term business plans, entrepreneurial skills and basic financial literacy are rarely a feature of these various activities. Moreover, among the young farming is regarded as an unprofitable task that is best left to the uneducated and the elderly.

According to the World Bank only five per cent of working Liberians are employed in the formal sector. Employment opportunities are few and young people often lack the work experience to apply successfully for jobs: “It is difficult to get work experience, so many people, even educated [ones], are forced to do small business because they have no other chance,” says Joseph Tanyon, headmaster of a high school in River Gee, as he describes this vicious circle. It is true that foreign companies are likely to create a large number of new jobs over the next few years, many of them for unskilled workers. However, many young people would prefer insecure self-employment to the poor working conditions often encountered on oil palm plantations or when logging in the rain forest.

Aftermath of the civil war

Local youth experts and employers state that as a result of the 14-year civil war, some young people find it hard to resolve conflict peacefully, make long-term plans or keep agreements. This can render them incapable of coping with the demands of education, work and family life. They also need help to find renewed purpose and direction in their lives. Apart from the psychosocial support provided to young women by the German non-governmental organisation (NGO) medica mondiale, there are no treatment opportunities in the region for young people who have been traumatised or mentally disturbed by the violence they have experienced.

While the United Nations defines a young person as someone between the ages of 15 and 24, the Liberian government uses the definition of the African Union’s African Youth Charter, which classes young people as those between 15 and 35. According to this definition more than 28 per cent of Liberia’s 3.5 million people are young people. All were affected by the lengthy civil war (1989–2003).

The employability of the young is reduced not only by lack of work experience but also by their limited education and training. The causes are complex. Many young adults became embroiled in the civil war as participants and victims and received no basic education. According to the government, the illiteracy rate in the 25–34 age group in Sinoe County is almost 60 per cent – almost twice as high as in the 16–24 age group. Another cause is the limited availability of training outside the capital: in the three counties the only facilities for vocational training are at two state-run high schools and three centres run by the Danish NGO IBIS. Getting to these training centres is difficult for young people in remote places such as Boundary Town. Schools are usually poorly equipped, and well-trained teachers prefer to work in the capital, Monrovia: in rural areas state employees must often travel long distances to receive their pay, flown in by helicopter.

In addition, family commitments often stand in the way of regular attendance at class: “People cannot send their children to school because they need to help their parents [...],” comments James Daryours, pastor in River Gee. Young women are particularly affected, especially as childcare facilities are inadequate: only 16 per cent of the young women questioned said that they had completed high school – this contrasts with the figure of 36 per cent among their male contemporaries.

Although the shortage of jobs has a detrimental effect on some young people’s motivation, education and training are held in high regard by Liberian youth: many describe a young person as successful if he or she is well educated, and almost all would like to train for a career. It is therefore not surprising that education is an even more powerful driving force for migration to the cities than employment. Almost two-thirds of those questioned would like to leave their home district. Most set their sights on the capital, but making the move is not easy.

Infrastructure as the major bottleneck

Much of Liberia’s infrastructure was destroyed in the 14-year civil war. The deficiencies are still visible. There is correspondingly high potential for the construction sector: foreign investors are expanding the transport network on a large scale and NGOs such as Welthungerhilfe are helping to build and equip schools and repair and maintain feeder roads. These projects could provide opportunities for young local entrepreneurs. But achieving this is difficult. Spare parts and building materials must be delivered from Monrovia; in the rainy season they literally get stuck in the mud. Maintaining buildings and roads also presents a challenge: “For everything you build, an association is needed to maintain it,” says Dirk Raateland, a Welthungerhilfe worker in Grand Gedeh, as he describes the need to anchor such measures in the community.

Social organisation as a livelihood strategy

Whenever possible, people try to help themselves: many young people support their communities by roadside brushing like Sunnyboy or helping disadvantaged neighbours such as widows in their fields. Youth organisations and sports clubs play an important social role: almost three-quarters of the young people questioned are active in clubs and organisations – often ones that they have set up and organised on their own initiative. Among the activities in which they are engaged sport, especially football and kickball, plays a key part as a unifying element. According to the young men and women who belong to two sports clubs in River Gee, clubs not only contribute to the personal development of every member but also promote peace and reconciliation in Liberia. In addition, many young people are involved in drama groups, organise concerts or help to raise awareness of issues such as HIV/Aids and hygiene.

The lack of formal financial services – in the three counties with their 300,000 inhabitants there are just two bank branches – is also countered by self-help: almost a fifth of the young people manage to take out small loans through the rotating funds system of savings clubs known as Susu Clubs. Many more would like to join a Susu Club. But however well organised the youth clubs and savings groups may be, their limitations are obvious: if organisations have their own premises, they are frequently dilapidated. The meagre equipment is often funded through small subscriptions or individual donations. For example, journalists at the community-based radio station Radio Gee record their interviews on a mobile phone and need to decide each day whether they will broadcast or produce – they have only one computer.

When asked about his future, Sunnyboy replies immediately: “I would like to earn enough money to provide my family and me with everything that we need.” Many young people in the south-east of Liberia dream of a better future – as successful businesspeople, farmers, politicians or students. Ellen Johnson Sirleaf, Liberia’s president, is aware of this and emphasised support for young people in her second inaugural speech in 2011: “The youth of Liberia are our future, and they sent us a message. They are impatient. They are eager to make up for years of conflict and deprivation.”

As part of the cooperation between Liberia and Germany, the Reintegration and Recovery Program has been supporting development and reconstruction in three counties in the south-east of Liberia since 2005. The programme, which is financed through KfW Entwicklungsbank, is being implemented by Welthungerhilfe with the two cooperation partners medica mondiale and IBIS. The third phase of the programme is addressing infrastructure, agriculture, education and sexual and gender based violence. To enable young people to be more involved as a target group in future, Welthungerhilfe commissioned the SLE to conduct a baseline study of young people and employment. The study explored the situation of young people, relevant economic sectors, education and vocational training and other services. Some 350 young people provided information about their employment situation and life circumstances in interviews and focus group discussions.