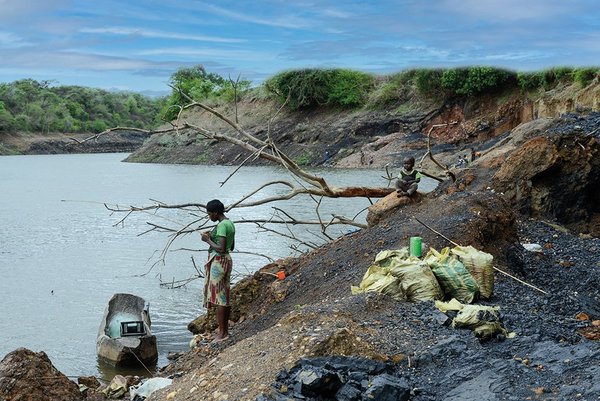 The former mining crater in Siamajele has turned into a lake.
Photos: Jörg Böthling

Despite the devastating impacts of climate change on many countries, coal mining continues unabated: some 8.13 million tonnes of the fossil fuel were extracted worldwide in 2019. A visit to the villages surrounding a Chinese coal mine in southern Zambia highlights the consequences for the local population.

Benson Siakabanze points out a small square, the remnants of walls. “That used to be the house I was born in,” he says, and pauses. “And we always sat in the shade under that tree there.” Again the 43-year-old falls silent and casts a pensive gaze over piles of stones, overgrown beds and a few abandoned household objects. Along with his neighbour, Rose Chulou, he goes on to show us the fields once farmed by both their families. “Until not long ago, those fields fed our families well.” Today the arable land is criss-crossed with dark fissures. Trees are tilted in the ground. A sign prohibits entry. That was put up by Collum Coal Mine, the Chinese company operating the coal mine for which three quarters of the villagers had to make way. Rose Chulou stands at the side of the field, arms folded, ever the farmer. She comes back regularly to pick mangoes from the trees she herself had planted next to her former home. “It feels terrible every time.”

Even the route into the village of Siamajele in the south of Zambia does not bode well. On the dirt road covered with black coal dust, fully loaded trucks rumble through deep potholes. Parked at the roadside, long rows of empty vehicles await their loads. The drivers squat alongside them in the shade, some sleeping on mats. “Here there only used to be the village, the fields and the bush,” recalls Lillian Hamusiya. She works for the Kaluli Development Foundation (KDF), a partner organisation of the German agency Bread for the World. She greets some women at the roadside who are selling fruit and vegetables to the drivers. It is not the only trade that is booming because of the mine. In dimly lit pubs with names like Bana Bangu Bar, the miners – most of whom are working a long way from home – drink their meagre wages. “Prostitution has also risen a lot, and with it the HIV infection rate.”

These women are the first of many people Lillian Hamusiya greets. Until a year ago she was working here with the villagers, advising them on sustainable agriculture, teaching nutrition courses, distributing improved seeds and giving talks on efficient irrigation methods. And with success: the people could feed themselves from their land, which is not a given in this southern Zambian region. All that went down the drain when the ground over the mine workings began to split open about two years ago. “They banned us from working in the fields any more. Many had to leave their homes because of the fissures,” recalls Benson Siakabanze. While some residents were given shelter in the church, others had to spend months living in tents, which the authorities took their time to provide after repeated complaints. Only after a television report instigated by Lillian Hamusiya and her organisation did the first residents receive compensation payments. “But at least a quarter of us have still received nothing.” Benson Siakabanze’s eyes glint with indignation. “These people are still living in the old village and working in their fields.” His own family finally received the money last year. But the amount, the equivalent of 250 euros, was only enough for a piece of land for the extended family of 25 to build a few cabins on. Before all this they were farming three hectares. Like Benson Siakabanze and his family, the other villagers have settled along the black dirt road with the long line of trucks, just one or two kilometres from their old homes.

Where he now lives, Benson Siakabanze still has a one-hectare plot of land that he had inherited from his father. It goes some way towards feeding the family. Things do not look as good for Rose Chulou and most of the others. With her compensation the widow could only just buy herself a quarter-hectare of arable land. She has to supplement her agricultural earnings by producing charcoal, like many other small farmers in the region. They use machetes to chop down trees and bushes, and carbonise the wood ready for sale at the roadside – with dire consequences for people as well as the environment. “In the constant smoke, it’s very exhausting work.” Rose Chulou coughs. “And the takings are very low.” They are just about sufficient for the three orphans she cares for. So the 49-year-old herself and the other six adults in the household usually have to skip one meal a day.

But even this precarious status is under threat. How long will Rose Chulou be able to use the new farm and her small piece of arable land? The smallholders have no enforceable titles to their land, unlike the Chinese company, which has had a concession from the Zambian government since 2001. And the demand for coal is growing. Mainly from the copper mining area known as the Copper Belt in northern Zambia and the country's numerous cement plants, but also from neighbouring countries like the Democratic Republic of Congo.

Currently the 500 miners are extracting 50,000 tonnes per month from the drifts which are up to 350 metres deep. The safety and environmental standards are catastrophic. Accidents happen regularly and frequently end in fatalities. Added to this, conflicts have erupted time and time again over unpaid wages and tax debts. Violent clashes and even shootings have ensued, claiming the lives of workers and one Chinese manager. The Zambian government subsequently withdrew the concession from Collum Coal Mine. But since 2015 the company has been back in business. It has even been offered an option to extend the mine. The deposit is part of a coal belt that extends all the way to South Africa. Not good news for Rose Chulou, Benson Siakabanze and the other former residents of Siamajele.

Nor for Arnod Maiya, one of Benson Siakabanze’s neighbours. The 63-year-old represents a cooperative of people from the region who, besides farming, extract coal themselves in the small open-cast mine behind the former village of Siamajele. Open-cast mining was started by an Italian company at the end of the 1960s. Its heavy machines gouged a deep crater into the land. A sudden ingress of water brought this to an abrupt halt – and turned the crater into a lake. “It happened so fast that they couldn't even salvage the trucks and the heavy milling machines,” he recalls. Those are still at the bottom of the lake. Meanwhile on the shore, Arnod Maiya and fellow members of the cooperative cut coal with picks and transport it away in small boats. “Our very survival has depended on it since we stopped being able to work our land.”

Arnod Maiya has endured four displacements in his life. When he was a young child, his family farmed fertile land in the Zambezi valley, the river border between Zambia and its southern neighbour Zimbabwe. The first time was to make way for the Kariba Dam, one of the largest on earth. That was in the late 1950s, when the government resettled them here. But not for long. Ten years later, when the Italian company started digging for coal, they had to move again. This time the government gave them land a few kilometres back, in the direction of the Kariba Dam reservoir. “The land was flat and the soils were fertile,” he recalls. A major foreign investor thought so too. Yet again, the local population had to make way. In the meantime the Italian open-cast coal mine was under water, and Arnod Maiya's family returned to Siamajele – now beside a lake.

From that time onward, the lake even fed an irrigation system which was built by the residents of Siamajele thanks to the support of a development organisation. “That was a great advance for our agriculture.” But then the earth began to split open. “Without our own coal mining we couldn’t feed our families,” says Arnod Maiya. Yet the Chinese mine operators have been to court once already and tried to put a stop to it. A compromise was found. Since then the cooperative, made up of 200 households, has been allowed to mine 30 tonnes per month. Initially that might sound like a lot. “It's no more than a heap like that.” Arnod Maiya points to one of the black heaps where the men of the cooperative have piled up lumps of coal between the shore of the lake and the old village. They are barely any higher than the villagers’ modest shacks.

Collum Coal Mine extracts three times as much every single hour. Arnod Maiya shrugs his shoulders and shakes his head. “What will the next thing be?” Then he sets off for home using the black dirt road, past his old village with the derelict houses, skirting the fields no longer tended by Rose Chulou and Benson Siakabanze. It’s a far cry from anything resembling a future.

Klaus Sieg writes about agriculture and food, the environment, energy, the economy and social is-sues. He is based in Hamburg.
Contact: klaus@siegtext.de