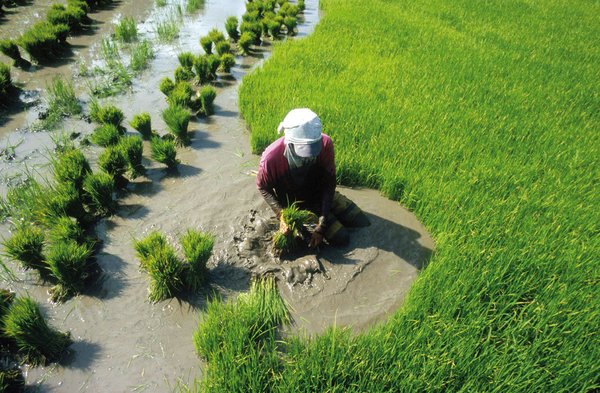 Food insecurity and climate change have finally brought agriculture back into the spotlight of international development debate. For all to have enough food, productivity on existing farmlands must rise, purchasing power of those in need must increase, and agriculture must be environmentally sustainable. A climatesmart agriculture with a focus on improved productivity, enhanced resilience and reduced greenhouse gas emissions is urgently required.

Ensuring food security under a changing climate is one of the major challenges of the 21st Century. In 2010, there were about 925 million food insecure people in the world – about 16 per cent of population in developing countries. Global population is projected to rise from seven billion currently to over nine billion by 2050, creating demand for a more diverse diet requiring additional resources to produce. Competition for land, water and energy will intensify in an attempt to meet the need for food, fuel and fibre, while globalisation may further expose the food system to the vagaries of economic and political forces. Estimates indicate that global food production must increase by 70 – 100 per cent by 2050 to meet human demand.

Agriculture is also highly vulnerable to climate change, and more than any other major economic sector, it will need to adapt to the changing climate. Under optimistic lower-end projections of global warming, climate change may reduce crop yields by between 10 and 20 per cent. Increasing temperatures and declining precipitation are already reducing yields of grains and other primary crops in many parts of the vast semi-arid tropics where so many of the poorest reside. Increased incidence of droughts, floods and pests may also lead to yield instability and a sharp increase in prices of major food crops.

Agriculture’s direct reliance on the natural resource base has always been a defining characteristic of the sector. Agriculture uses some 70 per cent of global freshwater and 40 per cent of global land area. Conventional forms of agricultural production are often unsustainable and, over time, deplete the natural resources on which production relies. Today, more than ever before, we understand not only the significance that climate has for agriculture, but also the enormous significance that agriculture has for the climate. Agriculture is the world’s leading source of methane and nitrous oxide emissions, a substantial source of carbon emissions, and the principal driver of deforestation worldwide. Thus, agriculture is a major contributing factor to climate change – some 30 per cent of global greenhouse gas emissions is attributable to agriculture and deforestation driven by the expansion of crop and livestock production for food, fuel and fibre.

The triple imperatives of increasing productivity, enhancing resilience to climate change, and reducing greenhouse gas emissions call for alternative practices which are collectively referred to as climate-smart agriculture (CSA). CSA seeks to increase productivity in an environmentally and socially sustainable way, strengthen resilience to climate change, and reduce agriculture‘s contribution to climate change by decreasing greenhouse gas emissions and increasing soil carbon storage. CSA tackles the food insecurity and climate change problems together, rather than in isolation. It is a vital component of green growth that seeks to operationalise sustainable development by reconciling the need for rapid growth and poverty alleviation with the need to avoid irreversible and costly environmental damage. CSA strategies include improved technologies and innovation, resource efficient use of land, water, energy and other inputs, improved access to information and infrastructure, efficient markets and risk management tools. (see Box)

CSA implementation also entails better policies that are mainstreamed into broader public policy, expenditure, legal and regulatory frameworks. With the exception of countries where input use is currently low, price support and energy subsidies should be replaced with policies that recognise and reward climate-smart agricultural practices, provide an enabling environment for value added, and commercialisation and trade. Landscape approaches and incentives are needed for a better management of agricultural productivity, carbon storage, fresh water cycling, biodiversity protection and pollination. Such approaches allow trade-offs to be explicitly quantified and addressed through negotiated solutions among various stakeholders. There is a need to step up research and knowledge dissemination to address urgent adaptation needs. Considerable policy support and capacity enhancement is also needed for climate risk management including insurance and safety nets, as well as improved access to new drought-tolerant species and weather information. Public support which focuses on research, investments in improved land management and land tenure rather than on input support is generally more effective, benefits more farmers, and is more sustainable in the long run.

Secure land tenure is a precondition for CSA

Progress on climate-smart agriculture is being achieved in different parts of the world. Burkina Faso which had previously focused on adaptation has in recent years adopted broader approaches to sustainable land management, achieving benefits in resilience, productivity as well as improved carbon sequestration through reduced deforestation/forest degradation. In Uzbekistan where the greatest problem is severe water stress, improved irrigation and drainage, land privatisation together with market liberalisation has enabled a doubling of wheat yields. In Brazil, regulatory reforms have markedly improved the incentive for private-sector investment in agriculture and forest management. In Niger, agroforestry techniques applied on five million hectares have benefited over 1.25 million households, sequestered carbon, and produced an extra half-million tons of grain per year. On Rwanda’s fertile hillsides a project designed to better manage rainfall and reduce hillside erosion has almost doubled earnings to 1,925 US dollars per hectare, while the share of production sold rose from 30 to 65 per cent.

Global agriculture is at a crossroads. Hunger remains one of the most pervasive development challenges facing humanity. In this era of climate change, efforts to tackle current food deficits and future food requirement must go hand in hand. Climate-smart agriculture holds significant promise for addressing hunger, increasing food production and enhancing climate resilience. The new green growth initiative may provide a unique opportunity for integrating these development imperatives.