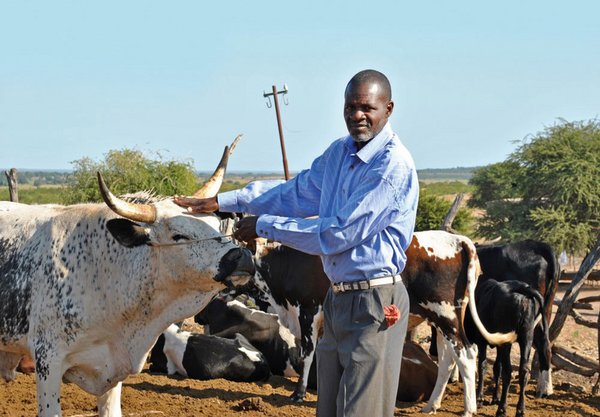 Armando Simando in Mabalane, Gaza Province in south-western Mozambique. The cattle farmer highlights the need to have reliable veterinary services in the area.
Photo: Clarissa Baldin/IFAD

Smallholder farming systems are particularly vulnerable to climate impacts. This is where the Adaptation for Smallholder Agriculture Programme (ASAP) run by the International Fund for Agricultural Development comes in. ASAP projects are aimed to make rural development more resilient to climate change, also through measures directly benefiting farmers.

The International Fund for Agricultural Development’s (IFAD) foray into programming climate finance began in 2004. Engagement in this area increased substantially after the organisation’s adoption of its Climate Change Strategy in 2011. It was around this time that an unmet demand for climate adaptation was identified among IFAD member countries. In order to close this gap, IFAD established a trust fund, financed by a group of donors (Belgium, Canada, Finland, Flanders, France, Netherlands, Norway, South Korea, Sweden, Switzerland and the United Kingdom) who were interested in supporting more innovative projects in response to the particular vulnerabilities of smallholder farming systems to climate impacts. This rationale led IFAD to become one of the first multilateral institutions to channel climate finance for adaptation in agriculture.

ASAP works in 41 low-income and middle-income countries, using climate finance to make rural development programmes more climate-resilient. The programme has a financial volume of 300 million US dollars, making it the largest global financing source for smallholder adaptation. Much of it goes directly to the 6.6 million farmers it benefits and to farmer-led adaptation, through financing a diverse set of approaches and actions that support local decision-making processes and community organisation initiatives to improve their ability to cope with climate change.

The first generation of ASAP projects have sought to promote resilient rural development interventions, which are framed by prospective climate risks. For instance, the Livestock and Pasture Development Programme (LPDP) in Tajikistan is concerned with raising the capacity of Pasture Users’ Unions (PUUs) to develop and implement climate-risk management community plans. These plans respond to pastoralists’ observed changes in the climate, such as greater heat stress during the summer months, and increased snowmelt leading to mudslides and river floods in spring. The climate-risk management plans lead to the re-zoning of production enclaves that are more suitable in light of changing climate trends.

Similarly, in the Southern Provinces of Mozambique, where livestock-raising represents a lifeline for resource-constrained pastoralists, the Pro-Poor Value Chain Development Project (PROSUL) is drilling boreholes to increase the number of watering points for herds, while also supplying water for domestic use and community vegetable gardens. Increased water availability thanks to the multifunctional boreholes has reduced the amount of time needed for women to collect and transport water, leading to improved household food and nutrition security.

In both projects, local vulnerabilities are accounted for based on changes in temperature and rainfall and how these factors are expected to influence pastures and livestock. However, the design stage planning has gone beyond climate risk analysis, and expanded its scope to factor in associated economic and social risks as well. Consequently, these projects are supporting enhanced veterinary services to reduce herd mortality rates, and private entrepreneurs that source livestock input supply are also engaged in value chain development.

In terms of support for climate-resilient agricultural practices, the Fostering Agricultural Productivity Project (PAPAM) in Mali has contributed to the protection of five lowlands areas and 17 villages’ groves through stone lines and reforestation. PAPAM has also supported the development of 20 market gardens, benefiting up to 1,600 women. One of ASAP’s general goal is to have three million women applying sustainable and climate-resilient practices by 2025.

On track towards a climate-resilience business model

The above-mentioned suite of interventions reflect a ‘multiple benefits’ approach that is gaining attention within the IFAD business model. Indeed, the Fund’s adaptation projects have been expressly designed to deliver ancillary economic and social benefits. This initiative to integrate climate change considerations into rural development has been given a boost as a result of ASAP.

Going forward, the ASAP instrument will transition from a model whereby a subset of projects focus on building climate resilience to one in which all IFAD projects undertake vulnerability analyses that account for climate risks, among others. As IFAD institutionalises its experiences programming climate finance, it will seek to tap resources from public sources such as the Green Climate Fund, as well as private financial institutions, to leverage sufficient resources to advance its transition to a climate-resilience business model.

Christopher Paul Neglia works in Communications at the International Fund for Agricultural Development (IFAD) and is based in Rome, Italy.
Contact: c.neglia@ifad.org