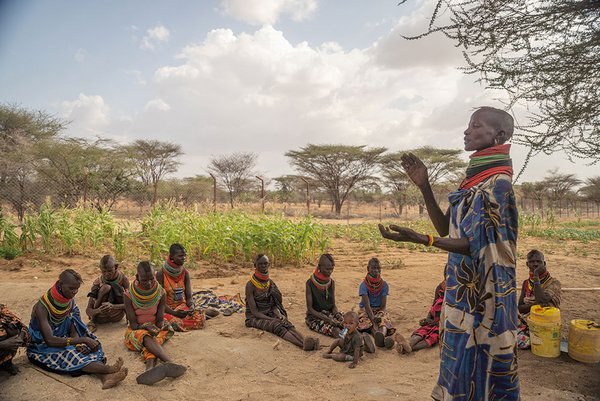 Making ecosystems and people resilient to drought is of utmost importance for the survival of humankind.
Photos: UNCCD

Land is our lifeline on this planet. Yet "business as usual" in how we manage land resources puts our own future on planet Earth in jeopardy, with half of humanity already facing the impacts of land degradation. The United Nations Convention to Combat Desertification (UNCCD) has addressed desertification, land degradation and drought for the last 30 years. Here is a short overview of topics it has recently focused on.

When camels, which typically survive longer on a lot less water and food than people, are dying in large numbers, you know the situation is desperate. This is exactly what is now happening in the Horn of Africa. This is the fourth year without rains in the region. Millions of people, especially children, are on the brink of starvation. Five years ago, a similar drought in Southern Africa affected 20 million people. Early this year, Chile marked a record-breaking 13th year of drought. And the two-decade drought in the United States of America is now considered the country’s driest period in over 1,200 years.

Droughts have always been a part of nature and the human experience but are now much worse, largely due to human activity. The frequency of droughts has risen by up to 29 per cent since 2000, with 55 million people affected each year. The devastating consequences are not confined to drought-stricken areas but reverberate around the globe, putting stress on food security, water and energy systems, as well as on international borders. According to the Drought in Numbers 2022 report released at the 15th session of the Conference of the Parties to the United Nations Convention to Combat Desertification (UNCCD COP 15) in May, by 2050, droughts may affect an estimated three-quarters of the world’s population. Making ecosystems and people resilient to drought is therefore of utmost importance for the survival of humankind and is also the core of UNCCD’s work.

Some examples: At COP 13 in Ordos, China, UNCCD Parties set up the Drought Initiative on the premise that the impact of a drought is not determined solely by its severity. The ability of communities and countries to anticipate and prepare for it also matters. The Drought Initiative promotes a shift in drought management from a reactive and crisis-based mode to a proactive approach. Rooted in a green recovery, it prioritises prevention and preparedness. It is focused on setting up drought preparedness systems, particularly national drought plans, regional cooperation to reduce drought vulnerability and risk, and sharing tools that stakeholders can use to boost the drought resilience of both people and ecosystems.

To date, the Global Mechanism, which was established as the operational arm of the UNCCD, has supported over 70 countries in developing and implementing targeted national drought plans focused on preparedness, response and resilience. The Global Mechanism provides advisory services in the context of the Drought Initiative and works with countries and global partners to mobilise resources. Through the UNCCD Drought Toolbox (see top Box), people and communities anywhere in the world can assess their drought vulnerability and access practical tools to mitigate drought risk.

The UNCCD-led Drought Toolbox provides easy access to tools, case studies and other resources for stakeholders to design National Drought Policy Plans to boost the resilience of people and ecosystems to drought. It is developed jointly by a broad range of partners, including UN agencies and scientific institutions. A large number of tools are organised in three pillars:
Pillar 1: Monitoring and early warning. The focus here is data, both from the ground and through remote sensing, to better understand how and when droughts develop.
Pillar 2: Drought vulnerability and risk assessment. This pillar provides insight into the risks of drought because some areas, populations and economic activities are more vulnerable than others.
Pillar 3: Drought Risk Mitigation Measures. This pillar looks at what measures, including sustainable land management, can be applied to mitigate the risks identified.

At UNCCD COP 15 in May of this year, too, drought resilience was a top agenda item. Countries agreed on a set of actions to address this increasingly urgent and global issue. Specifically, they established an Intergovernmental Working Group for 2022–2024 to evaluate all options for the Convention (see bottom Box) to support a shift from reactive to proactive drought management. For instance, they have set themselves the goal of identifying new areas that could turn into drylands, improve early warning, monitoring and assessment, share knowledge, coordinate action, and mobilise drought finance. The Desertification and Drought Day marked world-wide on the 17th June was a good opportunity to make people aware of the new drought resilience agenda.

Land degradation often exacerbates the impacts of drought, with disastrous outcomes for people and nature. According to the second edition of UNCCD’s Global Land Outlook, released in April 2022, up to 40 per cent of land is already degraded – meaning its benefits have been lost to varying degrees, with dire consequences for our environment, economies and societies. At current rates, 90 per cent of land will bear our imprint by 2050, resulting in the further degradation of 16 million square kilometres – an area almost the size of South America. The impacts of land degradation will be felt by most of the world’s population and often results in social and political instability, which drives poverty, conflict and migration. By regenerating soil and ecosystems and reducing the human toll on land, we can build a natural barrier against the perils of drought.

With the aim to achieve a state of no net loss of healthy and productive land, at COP 12 in Ankara, Turkey, in October 2015, UNCCD country Parties agreed on the land degradation neutrality (LDN) concept. The concept has been developed to encourage the implementation of an optimal mix of measures designed to avoid, reduce and/ or reverse land degradation. LDN aims to balance anticipated losses in land-based natural capital and associated ecosystem functions and services with measures that produce alternative gains through approaches such as land restoration and sustainable land management. At COP 12, the Parties decided to formulate voluntary targets for LDN to ensure by 2030 that any land degradation is matched by land restoration. That same year, LDN was enshrined in the Sustainable Development Goals (Goal 15.3). The LDN Target Setting Programme was created to enable countries to follow a structured process that leverages, assesses and measures the achievement of their LDN commitments. Currently, 125 countries have set (or are in the process of setting) voluntary targets to achieve LDN, protect and restore land resources, build resilience of land-dependent communities and promote responsible land governance. Sharing lessons learned and policy-relevant knowledge is an important pillar of this process.

By identifying shared visions, proven solutions, priority hotspots and monitoring baselines, countries have already shaped a new data-driven approach to tackling land degradation. The international community has so far pledged to restore one billion hectares of degraded land by 2030. Half of these pledges come from UNCCD Parties. The UNCCD’s Global Mechanism assists countries to reach their ambitions to achieve LDN and hopefully go beyond by generating new healthy land.

Science and knowledge for transformative action

Science and knowledge have always guided UNCCD’s work through mechanisms set up to develop and share scientific evidence around sustainable land management and its role in addressing land degradation and drought. The UNCCD Science-Policy Interface was added in 2013 to translate relevant scientific findings and assessments into policy-relevant recommendations, such as the conceptual framework for LDN published in 2016. It is the foundation for understanding, implementing and monitoring LDN, including its response hierarchy of avoiding, reducing and reversing land degradation. The report guides the activities of the LDN Target Setting Programme and the achievement of LDN. Countries share best practices and stories of sustainable land management through various channels. For example, the report Restoring Life to the Land, published in 2021 by UNCCD and the World Overview of Conservation Approaches and Technologies (WOCAT), shows how sustainable land management ties into the UN Decade on Ecosystem Restoration 2021–2030 (see also page 24). Drawing from a global database of over 2,000 projects, it underscores the role of sustainable land management in creating thriving ecosystems and generating economic benefits.

Many proven ways are available to restore land and reduce drought risks. The ongoing UN Decade must be one of transformative action, pulling together governments, scientists, policy-makers, the private sector and communities, to achieve our shared vision of a land degradation-neutral world and rise up from drought together.

The United Nations Convention to Combat Desertification (UNCCD) is one of the three global treaties – along with climate change and biodiversity – that emerged from the Rio Earth Summit 30 years ago. As the only legally binding framework that addresses desertification, land degradation and drought, UNCCD is the global voice for land. It rallies governments, scientists, policy-makers, the private sector and communities around a shared vision to restore and manage the world’s land.
The Convention is made up of 197 Parties (196 countries and the European Union) that collaborate based on the principles of participation, partnership and decentralisation. The work is organised around ten-year strategic frameworks, and supported through UNCCD institutions, partners and other relevant stakeholders. The parties meet every two years at the Conference of the Parties (COP) to agree on the actions to take at national or sub-regional levels and review progress in implementing past decisions. The most recent, COP 15, was held in May 2022, in Abidjan, Côte d’Ivoire.

Xenya Scanlon is the Chief of Communications at the United Nations Convention to Combat Desertification (UNCCD) Secretariat which is based in Bonn, Germany.
Jeroen Van Dalen is Associate Programme Officer Knowledge Platforms at UNCCD and Wagaki Wischnewski is the UNCCD Secretariat’s Head of News and Media.
Contact: communications(at)unccd.int