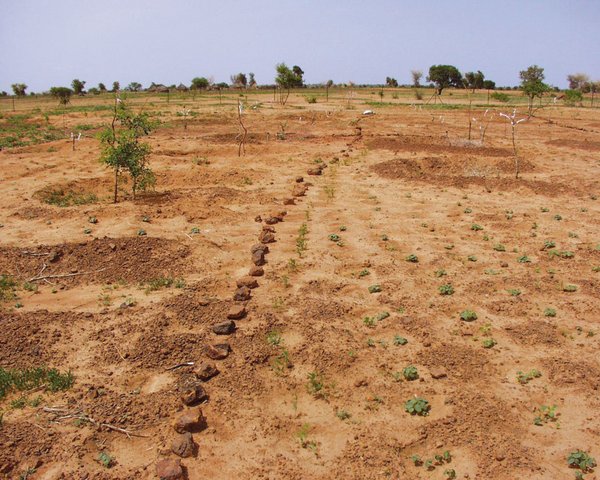 Not only has soil degradation in Niger been halted thanks to an integrated approach combining water harvesting technologies, the application of organic residues and planting of fruit trees and vegetables. The strategy has also enabled increases in farmers’ income as well as an active involvement of the country’s largely marginalised women in food production through their gaining access to land.

Degraded lateritic soils occupy more than 50 per cent of the land surface of Niger. These laterites, which are rich in clay, are covered with a hard crust which minimises water infiltration and hinders seedling emergence. Consequently, degraded lands are mostly dedicated to grazing and firewood harvesting as their agricultural production potential is negligible. However, the high clay content in lateritic soils offers the advantage of higher Cation Exchange Capacity (CEC) and water holding capacity compared to those of sandy soils. Therefore, these soils have the potential to re-establish agricultural production if the compacted layer is broken. This is the rationale for the development of the Bio-reclamation of Degraded Lands (BDL) system which enhances the conversion of degraded crusted soils into productive lands. This is achieved by combining indigenous water harvesting technologies (micro-catchments, planting pits and trenches), application of animal and plant residues and plantation of high-value fruit trees and annual indigenous vegetables that are resilient to drought environments.

The BDL is basically an agroforestry system, improved with the incorporation of high-value trees and high-value rain-fed traditional vegetables rather than the traditional trees and staple crops. It is an innovative production system of indigenous horticultural crops that provides solutions to a range of critical constraints affecting the rural population of the Sahel. Because of the simplicity of re-establishing tree and crop production, the potential for mass-adoption of BDL technologies is very high. The BDL reclaim the lost agricultural potential of degraded soils, physically by increasing water infiltration and harvesting, and biologically through planting of resilient woody species and income generating annuals. It is a multi-purpose strategy as it reduces further land degradation, increases water availability and productivity of the land while bringing economic benefits to farmers. Not only does the BDL mitigate desertification and climate change, but it also enhances women’s empowerment. In most West African countries, women are not allowed to crop and manage arable land. However, once productive land has been degraded by intensive cereal production, men commonly assign it to women. Local governments even provide contracts granting women the right to degraded land.

… with a multitude of species

The main woody species that can be planted in the BDL are the domesticated Ziziphus mauritiana (Pomme du Sahel), sweet tamarind (Tamarindus indica), the domesticated Sclerocaria birrea (marula) and the domesticated Acacia senegal. The first three tree species produce food, firewood, medicines and forage, while Acacia senegal provides gum, firewood and forage. In addition, two Australian acacias (A. colei and A. tumida) can be planted. These acacias provide firewood, mulch, and nitrogen to the soil as well as seeds rich in protein that serve as poultry feed.

Over the last seven years, Icrisat-Niger has conducted research to study the performance of BDL by combining several trees and leafy vegetable species adapted to each of the regions where the system is being implemented. The studies have allowed a selection of ideal plant mixtures according to sites’ ecological conditions and farmers’ interests. Current results show that by helping women grow indigenous vegetable and fruit trees, it is not only possible to increase their self-confidence to successfully produce food but also to enable them to improve family care while generating extra income.

The estimated value of fruit and vegetables produced is about 1,200 US dollars per hectare and year, indicating a remarkable additional income. Thanks to the success demonstrated with women groups on BDL technology implementation, men are now expressing their interest and would like to have their own BDLs. Therefore, we have also initiated a study on the performance of mixes of cereals and legume crops planted in the zai pits (planting pits) in addition to the established crop-tree systems. Besides harvesting vegetables, this practice will increase production of staple food crops particularly in areas where the availability of arable land is limited and men have to rely on degraded land for cereal production. In field trials that included addition of 200 g of manure and 3 g of NPK fertiliser per hill, a total biomass of 4.5 t/ha was produced in plots with cereal-legume association, compared to 2.5 t/ha for cereal alone.

A clear economic and nutritional impact

BDL is highly significant in a region where scarce and fragile arable lands are under extreme pressure to produce sufficient food to meet the demands of an increasingly growing population that also faces the negative effects of climatic variation on food production. At the same time, the restored lands allow active integration of Niger’s largely marginalised women to valued food production systems that improve their livelihood.

Additional BDL trials (ICRISAT non-published data) have demonstrated that a 200 m2 plot can yield an annual income of FCFA 50,000 (approximately 100 US dollars), which is equivalent to what men traditionally earn from millet production per hectare. Besides equalling traditional income from millet production, children, and other members of participating households, benefitted from the increased availability of nutritious food through BDL implementation.

The system is being adopted by many NGOs as a major means to empower women and to improve household livelihood in various zones of intervention across Niger. For example in 2011, the NGO Clusa installed 25 BDLs of 1.5 ha each through activities conducted in the USAID funded Arziki project implemented in the Filingué department in the country’s Southwest. Fifteen additional BDLs were installed in the department of Illela in the neighbouring Tahoua region through this funding programme.