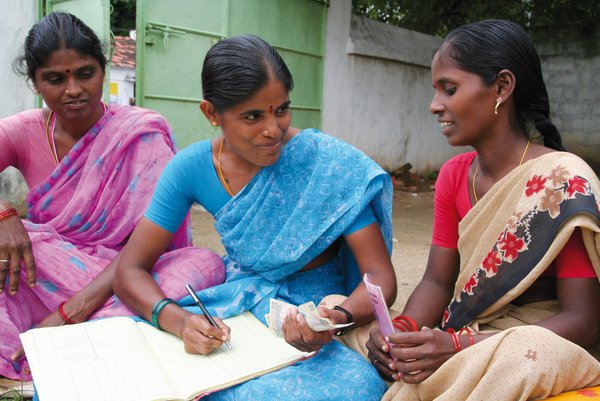 Self-help groups have played an important role in the empowerment of India’s rural women for many years.
Photo: Karl Kübel Stiftung

The acronym SHG has become very popular in rural India, especially among the womenfolk: Self-help groups have turned out to be a reliable and fair source of credit for them. This article demonstrates the important role of SHGs in the empowerment of women, in overcoming cultural and religious barriers, and in fighting corruption.

In India, even the central and state governments have recognised how helpful and effective self-help groups (SHGs) can be for improving the livelihood of the poor. Various government schemes for livelihood enhancement are accordingly routed through these organisations. The latest initiative is National Rural Livelihood Mission, inaugurated by Sonia Gandhi, Chairperson of the UPA (United Progressive Alliance), in June 2011. According to Sonia Gandhi, about 5,000,000 self-help groups are making efforts to improve the condition of women in particular in various states of India.

The SHG movement started in 1985, with the objective of providing credit to women on a sustainable and fair basis in order to free them from dependence on private moneylenders – and the resulting consequences such as bonded labour and child labour. The movement gained momentum in 1992, when the National Bank for Agricultural and Rural Development (NABARD) launched the SHG-Bank linkage programme. Under the SHG-Bank linkage, the SHGs can get loans from the bank amounting to more than twice their total savings.

SHG – a definition
According to the original concept, a self-help group (SHG) is a registered or unregistered group of persons having a more or less homogenous social and economic background. The members voluntarily come together to save small amounts of money on a regular basis. They mutually agree to contribute to a common fund to meet their emergency needs on the basis of mutual help.

The fundamental objectives of the SHG movement were the economic empowerment of women (and men) through micro-credit and developing personal initiative and leadership abilities among poor people. During the last two decades, the role of the SHGs in India has changed substantially; gradually they have extended their activities and interventions in economy and society to the following domains:

Research on SHGs and women's empowerment

In spring 2011, the “Centre for Development and Harmony” in the city of Bhopal, Central India, conducted a survey on the role of SHGs in the empowerment of women. Members of 13 SHGs were interviewed. They belong to the 1,090 SHGs formed by the organisation Good Shepherd Health Education Centre (GSHEC), in Karamadai near Coimbatore in South India. The total savings of the SHGs in this area amount up to 24,398,427 Rupees, the equivalent of about 407,000 Euros. The women of the groups surveyed shared their success stories about income-generating measures. They invested the revenues they had gained in the education of their children, expanding their own businesses and buying assets. They were proud to report on their empowerment process, and beyond that, they had taken action at different levels to solve problems of the village community.

“The initial motive for starting the SHG was to get loans and to create income to improve the family's living conditions. Gradually, a kindred bond emerged among the members,” says the author of the study, Father Jacob Peenikaparambil from the Centre for Development and Harmony. “In this process, it can occur that close relations emerge between SHGs, whose members belong to different cultures and religions and speak different languages. Thus SHGs are enhancing the national integration and identity on a local level.”

The study also revealed that the SHGs stand for more value orientation and integrity. To give an example: Prior to the assembly election held for the Tamil Nadu assembly in May 2011, agents of a political party came to the village of Vadvalli to distribute money. The villagers, under the leadership of SHG members, rejected the offer of money with the argument that their votes were not for sale. These acts of altruism and probity by the SHGs are excellent examples of the spiritual growth of the SHG members.

Fighting corruption at a grassroots level

In the wake of major political scandals in India during 2011, corruption has come into the focus of the political debate. Issues that have been raised include deficits that still persist in different regions of India in the public distribution system, in programmes for children and in schools. Other problems being addressed are the ineffective functioning of the village-level institutions and the large-scale diversion of items under the Public Distribution System (PDS), including the role of the village Sarpanch (the President of the Gram Panchyat, the lowest level of the Local Self-Government). There are claims that the dealers of the PDS distribution centres (shops) and government officials in charge of the Food and Civil Supplies Department are also involved in corruption. According to an estimate of the Central Government, about 40 percent of the wheat and rice allotted through PDS is diverted to the open market and does not reach the target population. Very often, the allocation of licenses for PDS shops is performed with political patronage, and later the politicians can expect rewards. This is the main reason for corruption in the PDS. The government officials also demand a share from the PDS dealers for allotting items on a regular basis.

In the interviews conducted for the survey, SHG members frankly addressed these deficits. Father Peenikaparambil believes that strengthening the self-help groups and their lobby could be an important step in consistently controlling local administration and already taking action against corruption at a grassroots level.

“Altruism is an important aspect of spirituality in most of the religions,” says Father Peenikaparambil. “The religious background of the members of SHGs and of those promoting the SHGs may be motivating them to be altruistic”. From the interaction with the members of 22 SHGs, he could learn that the process of internal transformation taking place in the SHG members as a result of working together was motivating them to become altruistic and transcend their self-interest towards becoming concerned about others.

Karl Kübel Stiftung für Kind und Familie (www.kkstiftung.de), based in Bensheim, Germany, has been supporting the “Good Shepherd Health Education Centre” (GSHEC) in Karamadai in its activities to achieve women empowerment for the last two decades. The formation of women's self-help groups and the focus on promoting a holistic, family-based development approach are essential components of the interventions. The projects are substantially co-funded by Germany’s Federal Ministry for Economic Cooperation and Development (BMZ).

This article is based on a study conducted by Father Jacob Peenikaparambil from the Centre for Development and Harmony, Bhopal/India.