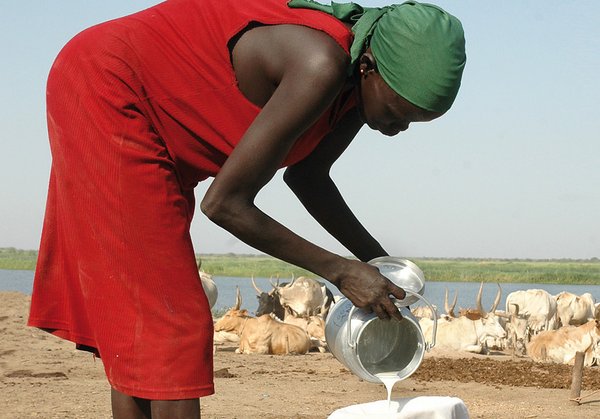 Milk is crucial to the population of North Somalia, both as food and in creating income. But unhygienic transport and storage conditions are resulting in a loss of quality and hence losses in market value. A project implemented by Vétérinaires sans Frontières Germany seeks to improve hygiene management along the entire milk chain.

Eighty-two per cent of North Somalia’s population depend on milk from mobile herds of camels, goats and cattle. Milk forms the basis of their diet and is a major source of animal protein and vitamins. Increasing urbanisation and sedentarisation provide ready markets for informal milk marketing, mostly organised along kinship lines and clearly dominated by female milk collectors and traders. In North Somalia, up to 48 per cent of the milk produced is sent to distant urban markets, about 19 per cent is sold directly in settlements within the production regions while at least 33 per cent is consumed by milk producing households. The milk trade provides income to pastoralist milk producers, milk collectors, milk transporters and urban milk traders. Milk producers receive about 54 per cent of the retail value of the milk, which reflects fair business relationships within the informal milk marketing chain. In the pastoralist economy, milk is worth nearly twice as much as meat.

The milk is produced by mobile herds grazing in semi-arid areas without infrastructure or access to clean water. Raw milk for trade is transported on rough roads over long distances, in cheap recycled plastic containers without cooling and under high ambient temperatures.

While some milk is transported directly to urban markets by special milk collection vehicles, a large share relies on public transport ferrying passengers, livestock and other goods. Inadequate transport services plus poor milk handling result in contamination, rapid souring and, sometimes, spoilage of the milk before it reaches urban consumers. Female urban milk traders operate micro-businesses with an average daily milk turnover of between 25 and 35 litres. The vast majority of these traders have neither shops nor stalls and sell their milk directly on the roadside, under dusty and hot conditions. For all these reasons, most of the milk sold in urban markets is of very poor hygienic quality. However, the very high price of 1.33 US dollars (USD) per litre indicates the high demand. Imported milk (mostly milk powder, but also some UHT milk) fills the gap between demand and available local supply; most Somalis prefer locally produced milk. Retail prices are directly linked to milk freshness (see Table).

As the Table shows, no milk losses exist in Somalia. Rather than throwing away bad milk, even low quality milk is sold as sour or very sour milk or processed into Ghee. It is the producers and traders who face income losses due to bad hygienic quality.

Camel milk has a clear advantage

In North Somalia, goats and cows lactate for only a few months a year, during and immediately after the rains. By comparison, camels lactate for 12 to 18 months, providing milk throughout the year. They are essential to the food security of pastoralist households. Certain antibacterial properties of camel milk give it superior quality compared to goat and cow milk, which enables it to be transported over longer distances than other types of milk. Furthermore, unlike goat and cow milk, camel milk can be sold whether fresh or sour, as Somali consumers value sour camel milk. Hence camel milk is the most widely traded milk in Somalia. During short periods of milk surplus excess goat and cow milk is traditionally processed into ghee, which sells at 12 to 15 USD/kg. Ghee from goat milk fetches slightly higher prices than cow milk ghee.

Transport distances between milk producing regions and urban markets vary from 40 kilometres to more than 400 kilometres, with collection points located at 10 to 80 kilometres from milk production sites. Improved milk handling and milk hygiene during production, collection, transport and retail holds the potential to increase incomes of milk value chain actors and to provide safer milk to consumers. Improved milk quality also strengthens the market position of locally produced milk, which has to compete against rising sales of imported milk powder. In 2008, the EU-funded Vétérinaires sans Frontières Germany (VSF-Germany) ‘Somali Pastoral Dairy Development Project’ (SPDDP) established 25 Village Milk Collection Centres (VMCs) in North Somalia. VMCs were built at or close to existing collection points, from where vehicle transport to final markets begins. Metal milk cans were provided at an affordable cost to VMC users, who were also assisted in organising themselves in groups to manage the VMCs and operate their milk businesses. The money paid by the milk collectors and traders for the milk cans remained with the VMCs as start-up capital to help them expand their milk business. Organising milk collectors is crucial to better relate them with transporters and urban milk traders. The primary role of VMCs is to provide milk collectors and traders with a facility for washing milk cans, which can then be sent back to milk producers or used for transporting milk to towns. VMCs are equipped with a water storage tank, a solar water heater and a washing room with taps, basins and drying racks. Milk collectors, transporters and traders were also trained on hygienic milk handling, milk transport and correct dispensing of milk at retail. Complementary trainings on animal husbandry and clean milk production are provided to milk producers so that they produce more and cleaner milk. Solar deep freezers for chilling milk cans in ice water baths to limit souring of milk during and after transportation are currently being provided to the VMCs and to urban milk trader groups.

Manual cream separators and trainings on their use enable milk producers to sustain their income through more efficient Ghee production in times of milk abundance. In one town, Galkayo, the EU-funded VSF-Germany ‘Supporting Activities of Livestock Entrepreneurs in Somalia’ (SALES) project built a milk marketing hall in 2010, substantially improving milk sales conditions.

An external review in 2012 estimated that the SPDD Project benefits 750 milk collectors, transporters and traders supplying milk to between 50,000 and 100,000 consumers. These milk traders source their milk from up to 15,000 mobile milk producing pastoralist families, who indirectly also benefit from improved milk sales.

Although milk is traditionally a women’s domain, it is men who control important assets in Somali society. This led to initial disputes over ownership and control of the Village Milk Collection Centres, which were overcome in all but three villages. As of December 2012, 22 of the 25 VMCs are active and controlled by the female milk collectors and traders.

The women do team up to collectively organise their milk transport and also share in dispatching their milk to markets according to short term supply and demand. But financially, each milk collector and milk trader operates her independent micro-business. It took time for VMC users to organise themselves into groups and to efficiently manage the milk collection centres. Management and financing of VMCs is especially crucial to ensuring regular water supply. Water has to be bought from tankers that truck it in from distant sources. The women also collectively share cleaning and maintenance of the VMCs. After the initial seed capital from milk cans was exhausted, the better managed VMCs introduced a small handling fee (per milk volume) paid by each VMC user that fully covers the running costs of the VMC. But this is yet to become common practice in all VMCs.
Solar water heaters installed at the VMCs proved to be delicate and prone to breakages, necessitating some repairs. Also some water tanks were insufficiently sealed and had to be rehabilitated in order to stop leakages.

Direct benefits to the local population

A milk retailer and VMC member
Mariam Mohamed Ali, 45-year-old female resident of Ainabo Town and mother of six children, is a member of the Ainabo Village Milk Collection Center (VMC). She also works as a milk retailer in her own small shop in town, where she sells both milk and other basic household provisions including food. Mariam sources her milk directly from the producers, who are the nomadic pastoralists, as well as being supplied by Ainabo VMC, who get the milk from the producers, too. On a single day, she buys 150 Kombos (1 Kombo = 750 ml) at a cost of 4,000 Somali shillings (SoSH) per Kombo, while she sells the same amount at SoSH 5,000 per Kombo. From the income she earns in milk sales, Mariam meets her household’s needs including food. She also saves a portion of that money and uses it to improve her current business (basically the two income sources of milk retailing and shop provision). Based on the above, Mariam’s income from milk sale (less taxes) amounts to SoSH 750,000 a day (equivalent to 23 USD).

Initially, not enough milk cans had been given out compared to the daily volumes handled by individual milk traders. More cans are currently being supplied, the ultimate goal being to replace all unhygienic plastic containers with metal milk cans. SPDDP is facilitating close co-operation between milk producers, milk collectors, milk transporters, milk traders and local authorities who oversee the urban markets to achieve this goal. This is being complemented by consumer awareness campaigns.

The project is also working on creating an enabling environment for the dairy sector by supporting the development of a dairy policy and mobilising local authorities to enforce standards in hygiene in the transportation and marketing of milk.

In some settlements, the VMCs were the first permanent structures built in stone and concrete and some also became community centres. A number of VMC groups have successfully explored options to generate non-milk related income, including renting out rooms as accommodation for local travellers and to projects for meetings and for trainings. Several VMCs also became a temporary operating base for human medical vaccination teams. Some women groups are planning to use the solar freezers at the VMCs to produce and sell ice blocks to local shops and households.

Vétérinaires sans Frontières Germany (VSF-G) is an international non-governmental organisation which provides humanitarian aid and development assistance to pastoralists and vulnerable communities in areas where livestock is of importance. Support covers animal health, agriculture, marketing, food safety and developing peace and conflict resolution capacities of communities and governmental institutions. Thus food security and strengthened livelihoods of pastoralist communities are achieved. The Regional Office, based in Nairobi, co-ordinates the implementation of projects in Kenya, Somalia, Ethiopia, the Republic of Sudan and South Sudan. VSF-G was established in 1991 at the Veterinary University of Hanover, Germany, where the headquarters is still located. A new office was opened in Berlin in 2012.