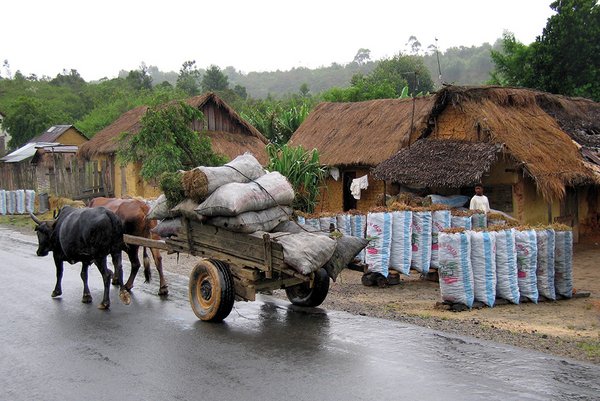 At the wooden cross-road

Fuelwood and charcoal continue to be indispensable in cooking the daily meal for most people in sub-Saharan Africa; in addition, wood as a fuel represents an important source of income. Pressure on forest resources as well as health hazards through indoor air pollution have resulted in more calls for switching to alternative energy sources. Our authors suggest another alternative: improving the existing supply chains.

Cooking food adequately is a prerequisite for a healthy life and makes up an overwhelming share of people’s energy requirements in developing countries. Particularly in sub-Saharan Africa (SSA), the majority of the population in most countries still rely on so-called traditional bioenergy – mainly fuelwood and charcoal – for cooking. The sector accounts for up to three per cent of GDP in several countries, also making it an important economic activity on the continent. Charcoal production in particular substantially contributes to livelihood security in many rural areas of SSA, often in times of financial stress. However, several challenges are commonly claimed to be associated with this energy use pattern that are exacerbated by factors such as population growth, urbanisation and the impact of climate change.

Traditional bioenergy demand and its consequences

Today, approximately 2.5 to 3.0 billion people strongly rely on these energy carriers, mainly for cooking purposes. Projections predict that this status will remain in the decades to come. The hotspots are SSA, India, and Indonesia, with dependency rates ranging between 60 and 90 per cent. While substantial parts of the rural population rely on collected fuelwood, charcoal takes the lead in urban areas. The reasons are transportability, reduced smoke emissions and more convenience in the cooking process. In urban areas, institutional and commercial users of wood energy, such as cafeterias and restaurants, are also increasing in numbers. A recent publication even outlines 3.7 million tons of woodfuel demand per day for 2009, which equals approximately ten per cent of global primary energy consumption. Effects commonly associated with this high dependency on traditional biomass are forest degradation and even deforestation, negative effects on climate change as well as indoor air pollution with negative impacts on human health.

Forest degradation and deforestation. The combustion of traditional biofuels is not per se harmful for the environment as they are in principle a source of renewable energy. However, there is concern that the constantly high and often increasing demand for biomass energy, particularly in developing countries, could cause wood extraction rates to exceed regrowth rates. The effects and magnitude of specific energy carriers on the depletion of forest resources are under discussion, with some sources claiming that traditional bioenergy demand is a major driver of deforestation and forest degradation and others arguing that extension of agricultural areas is the chief factor in this respect, while charcoal production is a mere by-product. The role of trees outside of forests, e.g. in agroforestry systems, as contributors to overall supply remains another open question. One core challenge in this discussion is the lack of data on both the supply and the demand situation.

In general, the collection of fuelwood in rural areas does not seem to harm forested areas substantially as the collection of dead and dry branches is preferred. The production of charcoal is more controversially discussed as it is often commercially driven and whole trees are used. Furthermore, applied charcoaling techniques are characterised by low transformation efficiencies so that far too much wood is processed in relation to energy output. In sum, the discussion whether and to what extent biomass use for energy in developing countries is causing deforestation or (temporary) forest degradation “only” is not conclusive, and impacts depend on site conditions, harvesting technologies and forest management.

Climate change. While the contribution of forest degradation and deforestation is said to contribute approximately 20 per cent of global greenhouse gas (GHG) emissions, the consumption of traditional biomass energy is claimed to be responsible for 1.9 to 2.3 per cent of global warming. The majority of traditional bioenergy consumers use either three-stone fires – mainly for fuelwood combustion – or traditional charcoal stoves, both being equally inefficient. Whether the introduction of improved cooking stoves (ICS) affects the emission of CO2 in particular is under discussion and very likely depends on the design of a specific stove and its capacity to reduce consumption. On the other hand, while replacing bioenergy through other sources of cooking fuel may decrease indoor air pollution, it will in most cases worsen the GHG balance, since most alternative fuels are fossil-based (e.g. kerosene). Electricity is very rarely used for cooking in SSA.

Indoor air pollution. As woodfuel and charcoal are often applied indoors, a disproportionately high share of women and their children inhale particle emissions equalling smoking two packs of cigarettes a day. Indoor air pollution also has significant harmful effects on unborn children. Moreover, it ranks fourth in the global burden of disease and causes up to 1.6 million deaths annually on a global scale. Particularly in developing countries, only malnutrition, unsafe sex as well as lack of clean water and adequate sanitation systems constitute more devastating health risks. Compared to fuelwood, charcoal is a relatively clean alternative, which is a major reason for its urban use.

Two principle options could remedy this situation: switching to alternative cooking energy sources or improving the existing supply chains. We argue that the second option – improving traditional bioenergy supply chains – has been unduly neglected and ought to receive more support.

Improving the fuelwood chain towards sustainability

To modify the currently prevailing system of extractive, often destructive and unhealthy traditional bioenergy use, changes along the supply chain are required. These include measures both on the production and on the consumption side.

Fuelwood production. To reduce, mitigate or even reverse the negative effects of exploitation of wood for energy, various measures are possible. One is the extension of selective tree cutting. Regrowth, re-sprouting or seed dissemination could also be fostered by leaving patches of old forest intact, applying certain tree-cutting measures to allow regrowth, ensuring soil cover to prevent erosion and of course replanting activities. Likewise important is the protection of re-growing areas from livestock. Forests are often common pool resources, and their management is subjected to formal, and more often, informal institutions, to user rights, free-rider behaviour, ethnic and power relations. Encouraging appropriate management systems to foster sustainable forest use requires flexible national legislation allowing adaptation to local conditions. The incentives to initiate such processes could be community income or perception of land and natural degradation as a threat to local livelihoods.

Another line of more sustainable wood production is tree planting by small-scale farmers in wood lots or agroforestry systems. In Uganda for instance, an area of between 0.02 and 0.06 ha tree plantation per person was found to be sufficient for sustainable production of traditional biomass for cooking and heating purposes. That area is affordable even for smallholders and can be achieved as mini-woodlots, hedges, tree groups or individual trees. Time reduction for fuelwood collection by women and children is another expected effect.

If trees can also provide other benefits such as fodder, fruits, construction material or timber, this can greatly increase but also differentiate the incentive to plant trees. Obviously, not all uses are compatible, and tree species differ in their appropriateness for different uses. Higher value uses will often override the energetic ones, but the latter can still constitute important positive side-effects.

Tree planting systems also require availability of saplings and thus a functioning supply chain based on appropriate (multi-purpose) species, long-term commitment, sound understanding and adequate management capacities. Depending on the spatial planting system, the quantity of biomass produced and the design of harvest rotations, such systems can be used for charcoal production, although they are better suited for fuelwood extraction. Such factors will also decide whether market production and/or subsistence of fuelwood are key targets for participating farmers.

In sum, sustainable tree-based bioenergy systems have a high potential to provide incentives for green growth. However, a holistic understanding of bioenergy value chains, tree production systems and their interaction with crop farming as well as the farm-household systems is needed to develop and expand sustainable solutions. This requires participatory, long-term, practical research and substantial development efforts.

Carbonisation. Processing wood into charcoal currently offers substantial opportunities for improvement. While in advanced technological stages conversion efficiencies of up to 50 per cent are reached, low-tech options usually applied in SSA (earth mound-kilns) achieve only between 8 and 15 per cent. Efficiency can be optimised by applying improved kiln designs. These entail optimised heat and air circulation by a preferential arrangement of the logs and the use of a chimney. However, such improvements require investment and sound knowledge for operation, which is currently lacking. In addition, corresponding policy regulations are often unclear or even contradictory – e.g. in forestry legislation (regarding the use of wood from government-owned forests) or in energy legislation, and in some regions, charcoal production is even criminalised, which hinders knowledge dissemination regarding more efficient production techniques and the establishment of producer networks. Politicians aim to overcome charcoal consumption to the advantage of more “modern” fuels rather than implementing strategies for sustainable charcoal production and consumption.

Optimised consumption efficiency. Efficiency improvements on the consumption side are important to reduce the overall pressure on woodfuel use and gain time to implement more sustainable solutions. Here, the provision and utilisation of improved cooking stoves is gaining momentum, as these alleviate degradation of forests and indoor air pollution simultaneously. For the users, the reduction of woodfuel consumption, and thereby living costs, is an important benefit. Even though the provision of improved stoves has been part of development co-operation since the early 1980s, monitoring data on long-term performances including reasons for adaptation and non-adaptation is rare. One major reason for non-adaptation is that stoves tend to be designed in laboratories, without real involvement of final users – according to the UNHCR deputy high commissioner for refugees, T.A. Aleinikoff, designers often fail to understand the cultural complexity of cooking or specific cooking conditions.

In recent years, the diffusion of improved cooking stoves became particularly important in the context of the Clean Development Mechanism. However, it was believed that these carbon offset projects were probably overstating the climate benefits of the stoves. Furthermore, the few existing long-term monitoring studies indicate that assumed utilisation rates might be too high. In addition, the overall negative image of wood and charcoal currently hinders widespread implementation. However, if high-quality stoves are carefully designed to respond directly to existing users’ needs, and if their application is optimised, particularly in terms of ownership and affordability also for poorer households, they can be a promising option for combating overexploitation of forest resources and indoor air pollution, as has been demonstrated in Kenya.

There are several entry points for improvements in the prevailing unsustainable situation in production, processing and consumption of traditional bioenergy. These include forestry management practices, enhanced property and use rights, technology development and adaptation, effective and enforced regulation, and awareness-raising campaigns. Increasing sustainability is of particular importance as side-effects are often associated with it, including substantial pro-poor development opportunities especially in rural production areas.

A modernised governance framework should be a key area of reform, with the objective to increase costs of environmentally unfriendly practices and create advantages for improved practices and investments. As there is no panacea for any intervention, these general recommendations need to be tailored to fit specific local or regional conditions. Improving the availability of sector-specific data will help to significantly enhance policy and investment decisions.