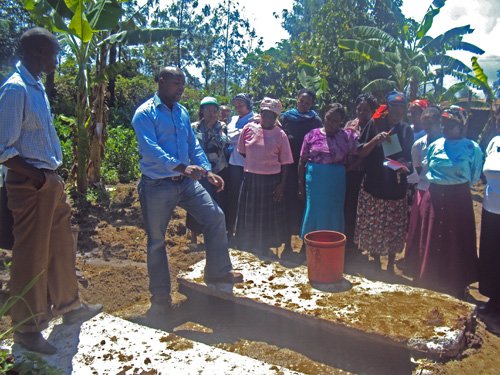 Laban Mwaniki a field officer explains how the biogas plant works to speed up the production of organic manure.

While thousands of farmers await to be paid by a Dutch sponsered programme for their efforts in climate change through alternative energy in Kenya; their greatest challenge still remains the lack of locally available and affordable equipments.

When Teresia Wanja 64, got enrolled in a sponsorship programme to construct a biogas plant in her home, she had no idea that the investment would also bring health benefits to her through the application of organic manure in her farm. Before the biogas miracle, her dairy farming ventures only gave her milk that she supplied to the village shops. Other than light her house and cook, her farm is one of the few farms that draw envy to any visitor. Green maize stalks sway away in the wind at her two hectare farm. The maize is appetizingly healthy, with each stalk heaving under the weight  maize cobs. Some have more than two, thanks to the organic manure that she prepares with remains from the biogas.

On one part of the farm, Teresia has planted nappier grass for her 11 cows. All the manure that she collects from the cows, she applies on the farm. But that is after it has been processed to bioslurry, a by-product of biogas.
Bio-slurry is the organic fertiliser, produced through anaerobic fermentation in the biogas digester. According to the experts, the manure does not harm the environment because it has no toxic or harmful substances; these are usually removed during the processing of biogas. It is also vital in the rejuvenating of soils that have been previously acidified through the application of chemical fertiliser, through supplying organic matter and macro- and micronutrients.

The smallest biogas plant can support two cows, and produce enough gas for cooking with a two-burner cooking stove, while the largest would take up to 12 cows and can light up a five roomed house and compound.
Through a three year co-operation with the Dutch government, rural dairy farmers in Kenya are encouraged to turn to clean fuel and a cheaper biological system to supply fertiliser and pest control on their farms rather than use chemical inputs. This has been done through the building of biogas digesters in their homes.

The government grant  dispatched vie the Kenya´s foreign affairs ministry, was first rolled out in a pilot project in June 2009. In the project, farmers access a subsidy of 25,000 Kenyan Shillings (296 USD) from the grant to enable them construct biogas plants in their farms.
Farmers do not pay back the money, and there is no stringent criteria on how to qualify for a grant. The most important qualifications are that a farmer must have a permanent residence, must be keeping cows, and should be a registered member with a farmers’ group within their home area. But farmers are not let off that easy, because the donors also sponsor a technical team to keep an eye on the quality of the biogas digesters.

There are a number of field officers who supervise farmers and help in technical advise on how to maintain the biogas digesters. Traversing the rural terrain by motorbike, these officers are also on call, and farmers can access them through mobile phones at any time. These officers are well trained by the donor and in the three year agreement, they are expected to oversee successful installation of as many plants as possible. So far, five thousand plants have been installed in rural Kenya, mostly in the Riftvalley region. Laban Mwaniki, a field officer notes that most farmers will ask for help whenever they find that their digesters have a malfunction.

“When their stoves fail to run well, or when the gas production has reduced, they always ask for advise, and mostly through the mobile phones,” explains Laban. He adds that for farmers, the most important support that they can be accorded is constant training and regular support through visits by experts. He is of the opinion that many biogas projects in the country fail because they are built for users without proper explanation on how to care for them, leading to poor maintenance of digesters and gas-holders that are prone to vagaries of weather. Farmers must maintain their digester in good working condition in order to get long-term benefits from their investments. The projects are not cheap, because a two cow biogas project costs Sh 50,000 (595 USD) with the most expensive project that can support up to 12 cows costing Sh 120,000 (1,429 USD) .

The funders have also engaged local technical experts institutions such as Manor House Agricultural Centre and Lengo Agricultural Training Centre to help train farmers in the use and maintenance of the biogas plants.
Farmers lives are consistently changing, thanks to the programme. So far, 2,700 farmers have received training through this collaboration, and are also expecting to receive payment for their efforts in saving the climate through carbon credits exchange.

According to Kenya Domestic Biogas Program, KENDBIP, the field officers are now in the process of collecting data on households that have been on the frontline of using biogas properly, so that they can benefit when payment for carbon credits starts.
George Nyamu, an expert on biogas installation technology and the national coordinator of the projects is quick to note that the government should now support efforts of the private sector to provide environment-friendly fuel to consumers.

“There are millions of Kenyans who rear cattle. With just two cows, it is possible for a home to access clean energy, fuel for their kitchens and organic fertiliser for their farms.” He however cautions farmers to be aware of dubious technicians, urging them to first seek professional counsel before embarking on such projects.

He points out that most of the electrical appliances that are compliant to biogas have yet to be manufactured locally, and are imported from countries in the Middle East, and China. These items are subject to import duty that is passed on to farmers in form of higher prices.

“If tax would be waived on these appliances, consumers would better afford them, rather than use appliances that are prone to damage, such as the ordinary cooking stoves in many homes today.” Cooking stoves, lighting materials and piping that is resistant to the methane gases are all imported.
The greatest challenge is  that farmers have to foot their own cost of purchasing the right wiring and other equipment which supports the otherwise corrosive biogas energy, which are mostly imported.”