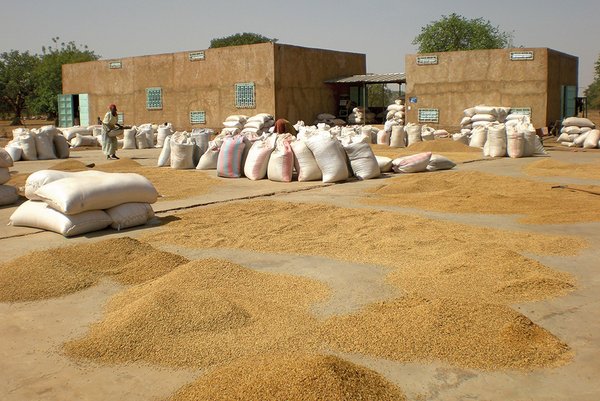 By integrating smallholders and small manufacturing enterprises in value chains, donors hope to lower their marketing risks and to help them earn a higher income.
Photo: Sabine Brüntrup-Seidemann

Promoting agricultural value chains to support rural areas is high on the development agenda among many donors. However, the impacts of this support are discussed controversially. Civil society organisations in particular fear disadvantages for poorer smallholders.

Above all owing to the steady increase in global trade, but also because of changes in the demand structure in national markets through the growing purchasing power of the burgeoning middle classes there, agricultural value chains (AVC) have attained high significance in the developing countries. The quality demands of consumers have grown, and more and more domestic and foreign manufacturing enterprises, bulk traders or supermarkets are attempting to cover their demand with better organised AVC.

Since the beginning of the new millennium, promoting AVC to develop agriculture and rural regions has gained significance among bilateral and multilateral donors. AVC promotion is to help link smallholders and small manufacturing enterprises to markets so that their marketing risk is lowered and it is worthwhile for them to produce goods for the market demands. As a central element of this approach, links to the market are achieved by strengthening business relations and general improvements in the horizontal and vertical integration within the chain. At the same time, participation in an AVC is expected to enable access to appropriate technical innovations as well as consultancy and financial services. Thus smallholders are also to be put in a position to intensify their activities and raise productivity and production, enhance the quality of their produce and market it better in order to ultimately earn a higher income. Simultaneously, via the creation of wage labour – in particular for low-skilled workers – in primary production, processing or commerce, an additional contribution is expected to be made to poverty alleviation.

However, civil society organisations caution that focusing smallholders on production for the market and in particular on growing cash crops for export is to the disadvantage of their own food production. Especially among initiatives involving large enterprises, they see the danger of the economic interests of these enterprises clashing with development goals. Furthermore, they criticise the all-powerful influence above all of transnational enterprises on the produce grown and the production methods applied, which can lead to a non-sustainable form of agriculture with extensive monocultures and one-sided dependence on the part of the smallholders.

The extent to which AVC has an impact on poverty and the approaches suitable to make AVC have a positive effect on poverty have hardly been examined so far, despite the significance of the approach. The German Institute for Development Evaluation (DEval) recently published a comprehensive evaluation of AVC support through German development co-operation (Kaplan et al. 2016).

Depending on the product and the target market, AVC are highly diversified and have different requirements regarding the resources, such as land, input, capital and knowhow. While high-value food crops for exports generally promise larger profit margins, they also require higher input levels and more knowhow, and the demands on the quality of products are higher than they would be in the case of (staple) food for the domestic market. In Ghana, for example, pineapple production for export has to meet higher quality standards, and owing to the more sophisticated variety grown, it requires considerably more input than pineapple production for the domestic market, for which varieties with lower requirements are grown. Supporting (staple) food does not bear the danger of growing produce for export being at the expense of production for a country’s own food requirements. Rather, (staple) food AVC raise the availability of qualitatively higher-value (staple) food (e.g. not containing aflatoxines or impurities), which represents an important criterion in food insecure areas.

So the choice of the product to be supported determines which resources are required and how high the entry barriers are, i.e. who can take part in an AVC and will thus benefit from support. In this context, labour also has to be mentioned as a resource. Several surveys confirm that here, it is above all the creation of employment owing to intensification in primary production that plays a significant role. Whether and to what extent jobs are actually created in further processing depends on the degree of mechanisation. Here, conflicts in aims may also arise between the international competitiveness of an enterprise, which often requires technical progress and increasing mechanisation, and the creation of low-skill jobs.

The “Five Rural Worlds” model introduced by the Organisation for Economic Co-operation and Development (OECD) in 2006, which is based on access to resources among different types of enterprises and households in rural areas, provides a helpful analytical frame to classify types of household in terms of the form in which they can participate in AVC. Distinctions are made between

The entry barriers described above show that chronically poor households cannot be directly integrated in AVC or benefit from them. They have to be supported with other measures. In integrating resource-poor smallholder households, it has to be considered that for them, participating in an AVC only represents one activity in the context of their survival strategy. What is invested more in resources in an AVC will be lacking elsewhere. Owing to their limited resources and their vulnerability resulting from this, they are reluctant to take risks such as investing in new cultivating methods, even if these may ultimately promise a greater yield. This group therefore requires special efforts to support it in producing the respective product in the desired quantity and of the desired quality and simultaneously lower its risk. There are usually a large number of bottlenecks, and they range from a lack of business planning through insufficient access to seed and improved means of production to a lack of business relations to ensure marketing.

One way to lower the production and marketing risk for both sides (producers and buying enterprises) is contract farming systems, which have a poverty impact according to a number of studies. Innovative packages consisting of agricultural extension services, input supply and/or harvest purchase agreements have proved to be successful. Usually, they not only support the production and marketing of products but also contain a comprehensive range of agricultural services, including the provision of the necessary production factors (seed, fertiliser, herbicides and pesticides, technical equipment), consultancy, transport infrastructure and credit.

The above-mentioned entry barriers affect not only particularly poor groups in the population but, frequently, women as well. They often have poorer access to productive resources and to organisations, information and business relations. In order to be able to integrate women in AVC, support has to consider this different context and orient activities accordingly.

Implementing a diversified and complex approach

Promoting value chains can be made very flexible and can thus achieve impacts across actors at different levels of the chain. However, owing to its systemic approach, AVC support puts high demands on development co-operation projects and also, in particular, on the government partner organisations in the partner countries that the latter can frequently only meet to a limited degree. This is why integrating private-sector enterprises may offer advantages since these are often in a better position to provide the necessary inputs and knowhow. Also with a view to the sustainability of support, it is important to identify and try out suitable institutional arrangements (government, non-governmental and private-sector organisations) that ensure access to the required resources and services in particular for the development co-operation target groups. In this context, farmers’ organisations and associations should also be more strongly integrated. They can play an important role in these institutional arrangements, e.g. to ensure the provision of inputs and organise marketing or to strengthen the negotiation position of smallholders.

Establishing stable business relations is based on developing trust, a process that ought to be supported on a long-term basis, since setbacks also have to be reckoned with here. Other activities and the entire range of bottlenecks to be addressed justify longer periods of support as well. Especially in the case of export-oriented chains that have to respond to a dynamic environment, support has to be conceived in a manner allowing a flexible response to external influences such as global changes in prices or preferences.

In order to make AVC support have an impact on poverty, it is important to know the actors involved as well as their resources, strategies and options for action in order to integrate them in the support concept. Gender-differentiated analyses of actors reflecting the livelihoods of the target groups as well as market and environment analyses are a precondition for support measures tailored to the requirements of the respective actors to be designed and implemented. Improving co-operation between the different groups of actors along a chain (producers, traders and processing enterprises), i.e. horizontal and vertical integration, is a key element in the sustainable functioning of AVC. In this context, it also ought to be noted that risks which support entails, such as possible displacement effects, socially inacceptable working or production conditions, have to be monitored both in the run-up to and during support. Here, civil society organisations can play an important role if they both point to shortcomings and strengthen the negotiating position of disadvantaged groups.