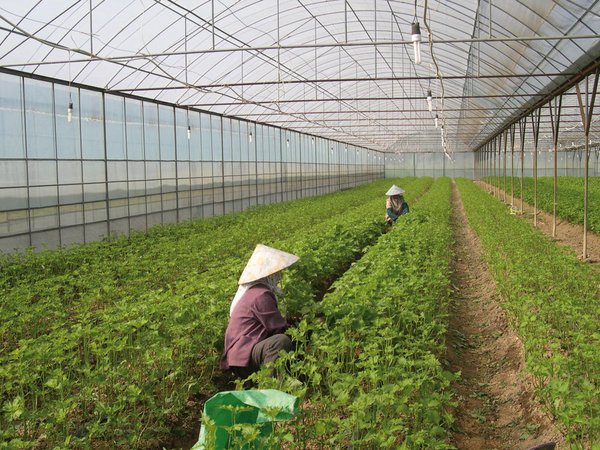 In 1978, the rural reform began in China, and since then farmers, including the poor ones, have benefited from a steady growth in income and gradually strengthened food security. This article explains how China achieved food security in the past three decades, how the reform process has affected poverty reduction and what aims are established to deal with extreme poverty and child malnutrition for the period of 2011–2020.

In 1976, when China was still under the planned economy, the nationwide average annual per capita income in the People’s Communes (the agricultural collectives) amounted to 60.2 Yuan, which was lower than that of 1956 at constant prices. At that time, more than one third of farmers’ households were in debt, and about 100 million farming people suffered from a shortage of food. By 1978, China was no longer self-sufficient in grain and had to rely on imports to supply 40 per cent of the urban population.
Farmers created a responsibility system with an output contract for the work groups in 1978 and developed it into a household contract system in 1981. The initiative of the farmers was given a positive response by top-level leadership, and eventually, it led to the abolition of the People’s Communes. The following principle measures in the reform programme were implemented during the 1980s:

The above-listed measures were issued through Document No.1 of the Central Committee of the Chinese Communist Party at the beginning of each year during 1982–1986, which indicates the first priority in the decision-making fields of top-level leadership. Document No.1 first plays a role in getting the local governments to pay special attention to food production and rural development. Second, it publicises the measures to target the short-term goals of the policies for the year that the document refers to. Third, it reasserts the mid- and long-term strategies and policies for food security and rural development. During 2004–2013, Document No.1 mainly emphasised the issues below:

Effects of the reform processes on poverty reduction

Agricultural growth during 1978–1985 as well as an accelerated process of industrialisation and urbanisation since the 1990s enabled a majority of rural households to attain food security and get out of poverty. The Table below shows that an average household’s grain output commercialisation rate increases as the area of its farmland is gradually reduced. The share of non-agricultural labour has risen, while the proportion of the farming income has declined in the total income of the household. First of all, such a tendency reflects the fact that part of agricultural land is turned to non-agricultural use. Second, agricultural productivity is enhanced. Third, around 260 million rural labourers have migrated into the urban areas and provide considerable remittance to their families in their home towns or villages each year.

Together with the rural reform process the central government launched a poverty reduction programme in a few provinces in western China in 1982 and initiated a nationwide antipoverty strategy in 1986, aimed at providing food and clothing for the poor through promoting development in poor areas. By 1994, the goal of food security was virtually achieved. Subsequent antipoverty schemes have chiefly aimed at eliminating income poverty, and in the main antipoverty measures so far, socioeconomic and human resource development projects have been run. According to the poverty line set by the World Bank (USD 1.25/day per capita consumption or income), China’s urban poverty incidence dropped from 44.5 per cent in 1981 to 0.9 per cent in 2008, whereas the incidence of rural poverty dropped from 94.2 per cent to 22.3 per cent during the same period. In 1978, when rural reform commenced, rural poverty in China was identified among 250 million people. It was measured with a poverty line defined by an annual food grain accessibility of 200 kilograms per capita.

For the period of 2011–2020 the Chinese government initiated a new programme for rural poverty reduction, and at the end of 2011, it lifted the poverty line to 2,300 Yuan per capita annual net income equivalent to 1.8 USD per day at 2005 purchasing power parity. Measured with the new poverty threshold, the size of rural poverty is estimated at 128 million people, or 13.4 per cent of the total rural population. Among the rural poor, there are 17 million children under the age of 6 years, accounting for 20 per cent of the total rural children at the same age. 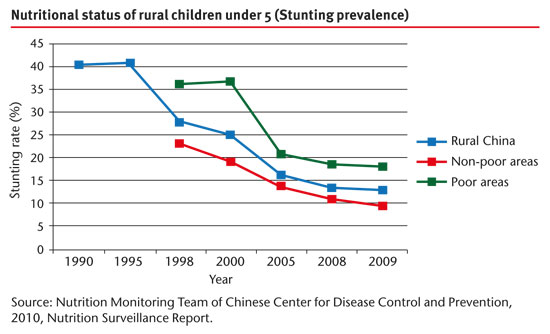 In the past three decades, child malnutrition has almost been eliminated in cities. The nutrition monitoring team found out that the low-weight and stunting indices of the urban children under the age of 5 years had dropped from 5.3 per cent and 11.4 per cent to 1.4 per cent and 3.1 per cent during 1990–2005. Compared to children living in cities and non-poor rural areas, malnutrition of the children in the same age group but living in the poor rural areas remains a challenge. From 1998 to 2009, the low-weight rate of this age group declined from 14.5 per cent to 6.6 per cent, and stunting prevalence was reduced from 36.4 per cent to 18.3 per cent. However, in 2010, the stunting rate of the children aged from 12–24 months was still observed at a peak of 22.8 per cent.

The government has taken comprehensive and multi-dimensional measures to tackle the remaining food supply gap, extreme poverty and child malnutrition:

China is in continuous fast transition to industrialisation and urbanisation, and is striving to maintain sufficient food supply. New measures are increasing the farmers’ own productivity through developing the small farms, decreasing market regulations, and expanding international trade in food. Poverty reduction and social security programmes together with better education are parts of the efforts to strengthen agriculture and food security.

* Zhu Ling is a Professor at the Chinese Academy of Social Sciences and this year’s winner of the Justus von Liebig Award for World Nutrition. The Award is conferred annually by the fiat panis Foundation in recognition of outstanding achievements in combating hunger and rural poverty; also see: www.rural21.com