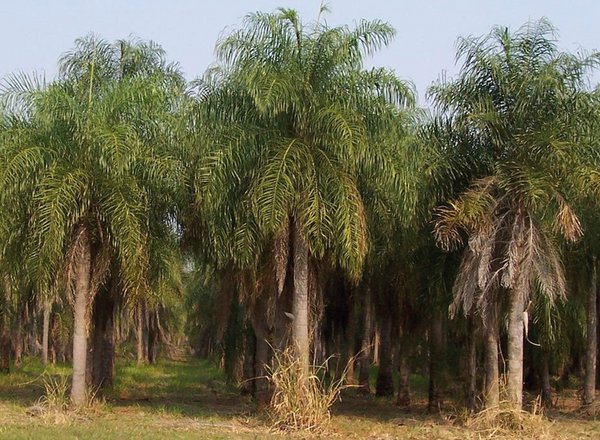 The South-American palm species Acrocomia aculeata has great potential as a sustainable source for vegetable oils and provides economic opportunities for both smallholders and investors on less fertile crop- and grassland in sub-/tropical regions with limited rainfall. Past years’ research has made the plant ready for commercialisation. Now, pilot projects are needed to demonstrate its viability.

Secure supply of sustainably produced agricultural products is a major challenge of the 21st century, in particular with regard to vegetable oils. The market of plant oils is dominated by a few crops, notably oil palm (35 %), soybean (27 %), rapeseed (16 %) and sunflower (9 %).

At the same time, demand for plant oils is continuously growing, in the food, energy and chemical sector alike. Global production of vegetable oils has more than doubled during the last two decades, with a particularly strong increase for palm oil (see Figure). Due to this development, supply security of plant oils is stressed even today (Oil World, 2009), leading to price increases on the one hand and to unsustainable expansion of oil crop production areas on the other. In Indonesia, the main producer of palm oil, the area under oil palm increased from about 5,000 km2 in 1980 to more than 45,000 km2 in 2005 (Bangun, 2006). The continuing trend is strongly correlated with the destruction of rainforest. Income from timber sales is used to finance the palm plantations (WWF, 2003; Greenpeace, 2007; Worldwatch Institute, 2010). In addition, the eco-physiological requirements of the oil palm (Elaeis guineensis) equal those of rainforest vegetation. Hence, oil palm production inevitably competes for land area with rainforest. 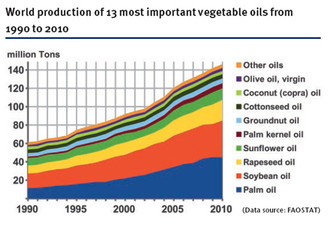 The advantage of oil palm is its extraordinarily high oil yield potential and resulting low production costs. However, due to forest destruction and drainage of peat lands, high amounts of CO2 may be emitted, even making greenhouse gas balances negative in many cases (Greenpeace, 2007; Meyer & Dehue, 2007). Likewise, expansion of cropping area for other conventional oil crops meets its sustainability limits, as no additional suitable areas are available (e.g. rapeseed) or the crop also competes with forest or biodiversity protection (e.g. soybean in South America; WWF, 2003).

Acrocomia aculeata is a thorny palm species native to South America and distributed in the tropics and subtropics from Mexico to Argentina. It reaches a height between eight and twelve metres. Few relevant pests or pathogens are known. In contrast to Elaeis guineensis the genus Acrocomia shows high plasticity with regard to environmental conditions. Acrocomia species occur in temperate and tropical regions and thrive under annual precipitation from 1,000 to 2,500 millimetres (FAO, 1986). For a short time, even freezing (–5 °C) is tolerated. 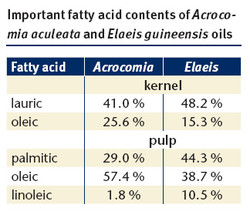 Acrocomia palms can tolerate fire and prolonged drought up to six months (FAO, 1986). Excluding water logging, Acrocomia grows on a diversity of soils (Martin, 1976), where high amounts of sand and organic matter are preferred (Teixeira, 1996), and it has been also cultivated on nutrient-poor sandy soils (Bohn, 2009).

The plant has manifold traditional uses for food specialties, animal feed, fibre or medicine. But its main products, oils from fruit pulp and kernel, may boost its importance as an economically viable alternative to Elaeis guineensis that does not compete with rainforest or fertile land.

In addition to its low costs, the oil palm Elaeis guineensis is favoured for its high contents of lauric acid in kernel oil used in foods and cosmetics and its low contents of polyunsaturated fatty acids in palm oil (= pulp oil), respectively. The Table above compares relevant fatty acid (FA) contents of pulp and kernel oils of both Acrocomia and Elaeis. By evidence, Acrocomia oils already meet a similar composition, and including genetic variation and improvement, Acrocomia is fully suitable to substitute Elaeis oils by quality.
However, because the site requirements of Acrocomia differ from those of the African oil palm, Acrocomia has the potential for a sustainable expansion of plant oil production area. In addition, storage stability of Acrocomia fruits is much higher than that of Elaeis fruits. This allows for decentralised production and storage. Its proven processing technology is comparably simple and already cost-efficient at a scale of 5,000 metric tons (MT) of fruits per year. This corresponds to a plantation area of about 250 hectares (ha), as an average yield of 20 MT of fruits per hectare and year can be expected from the fifth year after planting.

The Figure below illustrates the processing steps and typical fractionation of Acrocomia fruits, important uses of the products and the resulting revenues for each fraction. Market values are based on experiences in Paraguay and comparable commodities. 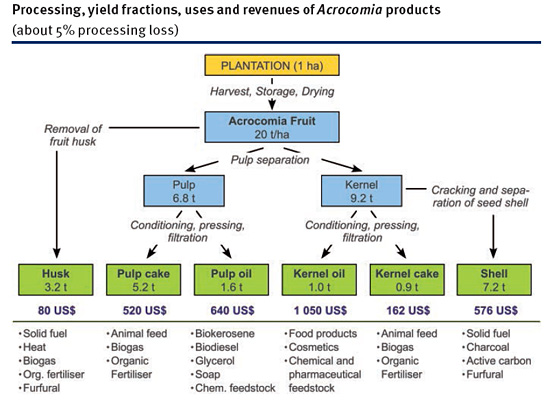 With a total annual yield of more than 2.5 metric tons (MT) of oil per hectare and a range of valuable by-products Acrocomia is also economically interesting. The Figure below shows the price development of palm kernel oil and palm oil during the last decade. 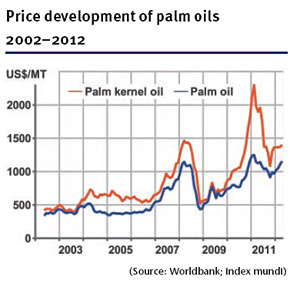 For all products derived from the Acrocomia oil palm there are existing local or international markets. Most of these markets promise future growth and Acrocomia’s product diversity entails risk diversification. These are important characteristics for investors. But its small-scale viability also makes Acrocomia a promising opportunity for smallholders. In many tropical and subtropical regions large areas are cultivated with few crops in capital-intensive monocultures with disputable ecological and long-term economic sustainability. Product diversity is not established in industrial production as a rule.

In contrast, smallholders frequently cultivate native plants that are rarely grown in large scales due to lack of domestication or standardisation. Acrocomia can even be grown in mixed cultures and processed in small quantities. This allows for its production in small-structured, perennial and capital-extensive cropping systems that improve participation of small farms in rural development. In addition, Acrocomia is a profitable crop for the less fertile soils of a farm and can thus contribute to improving land use efficiency. If established on degraded land, the plant may also serve as a carbon sink and enrich the soil with organic matter during its long productive lifetime of 60 to 70 years.

In summary, Acrocomia can help diversify income sources of smallholders as well as the portfolio of global plant oil production. There is only one disadvantage: a temporal gap between investment and profits. It takes five or six years until first harvest, and even small processing facilities need capital. While the years without harvest can be bridged by alley cropping, e.g. with camelina, groundnut, castor or cassava, a commitment of investors or financial tools for cooperatives are desirable for the establishment of Acrocomia factories.

Paraguay has a strong agricultural sector. More than half of the country’s area is characterised by the sparsely populated Gran Chaco in the west, a hot, mostly dry and in parts marshy savannah landscape. Twenty-one per cent of the country is forested, but illegal deforestation is still a critical issue. Numerous smallholders in Paraguay own old Acrocomia populations that only need to be harvested. Such smallholders can be included in the value chain merely by providing a market for the fruits. In addition, they often have idle land that can become profitable through planting Acrocomia, if a market perspective is given.

Paraguay is the only country where technical processing of Acrocomia fruits is done. It has been practised since 1940 (Markley, 1956), and in 2011 about 5,000 MT of kernel oil was produced and marketed. Today, there are ten factories that exclusively handle fruits from semi-wild collections, i.e. no managed plantations are available. Starting from this position, a cooperation between University of Hohenheim (Germany), Universidad Católica del Paraguay and the company Agroenergías SRL has been launched with the objective of understanding and domesticating Acrocomia aculeata sufficiently well for a sustainable, commercial cultivation. Further partners have contributed to the improvement of production processes and economic opportunities.

Significant progress has been made, inter alia, in germination and harvest technology, and in monitoring of wild Acrocomia plants. While the seeds naturally germinate within 12 to 60 months, it is vital for plantation establishment to control emergence of the plants in tree nurseries and produce a predictable number of seedlings. After in-depth research, a treatment is available to achieve 50 per cent germination rate within six weeks. With regard to a characterisation of fruits originating from various Acrocomia populations strongly varying but satisfactory results were obtained. On average, the pulp of fruits presented a fat content of 32.9 per cent with a minimum of 24.2 per cent and a maximum of 50.4 per cent, whereas the seed had a mean fat content of 58.3 per cent with a variation of 41–71 per cent (Haupenthal et al., 2011).

Harvest frequently makes up for a large proportion of agricultural production costs, which is not different for Acrocomia. Its fruits are not picked but fall to the ground when mature. This requires an efficient method for collecting them quickly to avoid decomposition processes of the pulp. In cooperation with agricultural equipment producers it was possible to identify and adapt simple and cost-efficient tools for fruit collection that increase the harvest rate by a factor of five.

Finally, demonstration plantations have been established successfully. The requirements for scaling up Acrocomia production are thus met.

In order to realise the potential it takes two things: 1. larger scientifically accompanied pilot plantations to increase know-how and provide security for investors, 2. first movers that are ready to invest into a future market already now.

In the context of research and optimisation, the following issues should be addressed: Breeding is necessary to optimise yields, agronomic handling and quality parameters. Extended trials with intercropping will improve land use efficiency and integration schemes for smallholders. Resource efficiency (water, nutrients, and light) of Acrocomia still needs to be analysed in detail to optimise input-output ratios. There is also need to analyse genotype x environment interactions in existing populations to select genetic material for breeding without having to wait more than five years for an initial screening. This is of particular interest as the genus is open- and cross-pollinating.
Further research is also needed in fruit processing and bio-refining to evaluate the diversity of potential end products and optimise value chains. For socio-economical sustainability strategies are needed to let smallholders participate in the new markets, e.g. by outgrower schemes.

Finally, a screening of other oil crops should also be included in research efforts to improve agrobiodiversity effectively. For example, Brazilian native crops Pequi (Caryocar brasiliense) and Buriti palm (Mauritia flexuosa) have a yield potential in the same range as well (Tickell, 2000).

Production of plant oils from alternative crops may largely relieve the environment and provide chances for rural development. It is vital to demonstrate success in order to realise this potential in large scales. Acrocomia aculeata will be a promising candidate to start with.