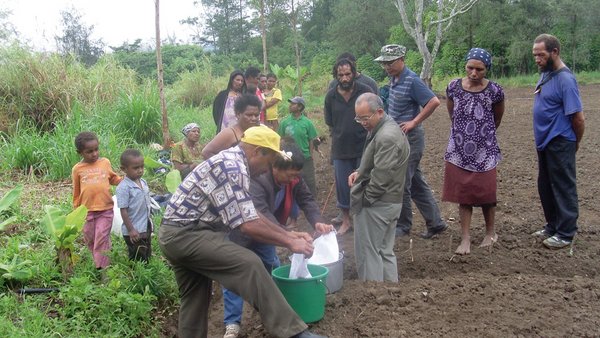 In Papua New Guinea, more than four million people (84 % of the population) depend on subsistence and semisubsistence agriculture. Agriculture accounts for 26 per cent of GDP.
Photo: M. Linibi

The Government extension services in Papua New Guinea (PNG) are weak. There is a general lack of money and staff, and the country has a poor infrastructure. Above all small-scale farmers in remote areas are left out of developments. This applies in particular to women farmers, despite their providing 85 per cent of the rural workforce.

The Government extension services in Papua New Guinea (PNG) are weak. There is a general lack of money and staff, and the country has a poor infrastructure. Above all small-scale farmers in remote areas are left out of developments. This applies in particular to women farmers, despite their providing 85 per cent of the rural workforce.

At the beginning of the new millennium, an extension concept was designed to test a novel approach, the contracting out of support services to service providers. This concept was applied in the “Smallholder Support Services Pilot Project”.
As a farmer myself, I was enthusiastic and admired the concept, the aim of which is to increase production, productivity and income of smallholder households while ensuring sustainability of farming systems. I decided to take the concept to women farmers, who are responsible for a major share of the country’s food production. It seemed a good way to enhance the status of women in the country’s agriculture.

The concept is based on the following ideas:

The women hold regular meetings in which they determine the topics of extension according to their needs and suiting their area. Often, the focus is on infrastructure and transport issues. They then discuss the problems and possible solutions with their executives. These are local service providers acting as “expert farmers” who have demonstrated competence in training other local farmers. This service is free of charge for the small-scale women farmers.

One of the project’s major achievements is that women have now organised themselves and are able to report on their achievements. For example, they have learnt how to use new techniques in yam planting and rice farming or in vegetable growing. In addition, they have succeeded in improving their marketing skills; now they are able to sell their produce to wholesalers and many other market outlets. This is a crucial step, for most of them are subsistence farmers. The project has also changed the way the women see their work; now, they regard themselves more as “businesswomen”. In the course of the project, they are trained to do basic bookkeeping, too. And we link them to financial institutions so that they can have access to credit facilities.

As to knowledge transfer, we partner with research organisations such as the National Agricultural Research Institute (NARI). In addition, we arrange field days, demonstration plots and other activities enabling practical learning. We have also achieved networking with other organisations, such as the Australian Women in Agriculture Association and other partners.

The project started in 2006. It now operates in 20 Provinces of Papua New Guinea with 118 registered groups of 15-25 members each. We are also considering establishing a network in the Solomon Islands and Vanuatu.

In Papua New Guinea, it’s women who do the bulk of the work, but it’s the men who decide how the profits are spent. In general, women do not own land – with the exception of some Provinces where there are matrilineal societies and women are land-owners and decision-makers. As was to be expected, some obstacles had to be overcome in the early stages of the project. But generally, all male farmers are very supportive as they see women benefiting from the networks. After all, promoting the women benefits the family as a whole, and they are making a contribution to earning an income and to food security.

Participatory, demand-driven extension projects improve relevance, ownership and adoption by smallholders. And they yield a positive return on investment in extension programmes. Surveys have shown that the cost effectiveness and impact of extension services per farmer contact is more than double that of services provided through conventional government officer-delivered extension services.