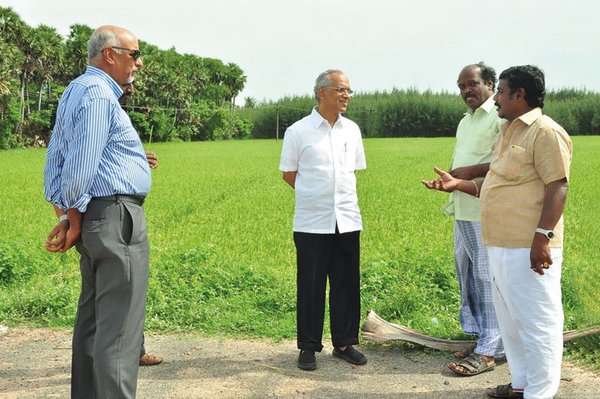 Farmer Sridharan Venkatachalam (right), who has benefitted thanks to associating with ISF, speaks to visitors. Photo: courtesy ISF

A new business model that could catch on – with their company “I Support Farming”, two brothers from South India’s Chennai are bringing investors from the city together with farmers who lack capital for necessary investments. The investors bear the risk, while the profits are shared.

As a practising farmer, Sridharan Venkatachalam could not believe that total strangers would pay him 231,000 rupees, money he had spent on preparing his ten-acre farm and on sowing paddy. The strangers offered to guide him in his cultivation process. They wanted a percentage of his profit, if their work showed results. The proposition was so irrational that the farmer thought it was a scam. It came from siblings Vijaykumar Mani and Vasanth Kumar Mani of Chennai, a city in South India. Having observed the disconnect between rural farmers and urban consumers, the duo decided to bridge the gap. They quit their corporate jobs and founded a company called "I Support Farming".

The brothers practised farming on their six acres of land near their hometown. As they were employed in Chennai, they would visit their farm about 170 km from Chennai during weekends. During the visits, they observed that the neighbouring farms were left fallow. They found that the farmers were not cultivating because they did not have money to prepare the land, and buy farm inputs. “To cultivate paddy, a farmer needs about 25,000 rupees – 300 euros – per acre per crop cycle. As farmers generally have two or three acres, they need double or triple that amount,” says Vijaykumar. “Since they don’t have that much money, they don’t make use of their lands.” With growing input costs and increasing risks because of unpredictable weather patterns, farmers – 86 per cent of them marginal and small farmers with landholdings of less than two hectares – are unable to sustain on farming as a livelihood. Hence many of them take up other labour, leaving their land fallow. As per the agriculture census of 2011, eight per cent of farmland in India – about 13 million hectares – is thus affected.

Working capital to start cultivation is a major challenge for farmers. Depending on various factors, they borrow money from one of three sources to start cultivation. According to Vasanth Kumar, farmers take crop loans from banks or financial institutions at an interest of 7 to 9 per cent per annum, or borrow from local money lenders at an interest of 24 to 48 per cent per annum. The third option is not borrowing in the true sense. Agricultural input shops give fertilisers and pesticides without taking money from farmers. In turn, farmers sell their produce to the supplier at the end of the crop cycle. “Normally the shops hike up the price of inputs and also pay a lower price for the produce. So the farmers lose out on both counts,” says Vijaykumar. After repaying the loan with the harvest, farmers were left with a small profit if they had a good yield. If they suffered a crop loss because of pest attacks or natural calamities, they did not have the means to repay the loans.

Vasanth Kumar observed his colleagues becoming interested in farming when they learnt that he was a weekend farmer. Often they asked him about his farm, farming practices, farmers’ debts, etc. And they wished to support farmers. “On the one hand, a farmer could not prepare his land because he did not have the 1,000 rupees needed for ploughing. On the other hand, an urbanite would spend the same amount, say, on dinner. The same amount has different values in the city and in the village,” explains Vasanth Kumar. The brothers decided to connect the farmers to urban consumers. Leveraging the urbanites’ interest in farming, they resolved to spur them to invest in farming. They arranged a farm visit, bringing friends and farmers together, where the latter explained the issues they were facing. The meeting resulted in the formation of a new farming business model that the brothers had developed. They founded I Support Farming (ISF) in May 2016. Their first project involved two farmers whose land was near theirs. With the investment of seven urbanites, they started cultivation on eight acres (1 acre = 0.4 hectare) of land.

As capital was the main issue for farmers, the ISF model has completely de-risked them financially. Farmer Sridharan reluctantly agreed to let ISF guide him in his farming. “I always maintain financial records. So ISF understood that my expenses were for real and paid me,” he says. Then ISF’s field staff visited the farm every day. They ensured that fertilisers and pesticides were applied only when necessary and only in required quantities. The higher yield surprised the farmer. He recalls paying the brothers Rs 43,800 (524 euros), their margin.

The investment from the city is spent directly on the farm. Right from purchasing certified seeds and farm inputs, to giving guidance on proper and timely application of fertilisers and paying the workers every day, ISF’s field staff take care of every farm activity. “Thanks to ISF, we don’t need to invest any money at all for cultivation. They buy the inputs, pay the workers, they sell the produce, and they give us our share of the profit. So there is absolutely no financial risk for us,” says Sridharan.

While bringing in urban capital was part of the ISF business model, for the model to work, the brothers had to increase revenues for everyone concerned. “Our aim is to reduce cost and increase productivity,” says Vasanth Kumar. With a sizeable acreage under its patronage, ISF buys seeds, fertilisers and pesticides in bulk, which results in an overall cost reduction of five to ten per cent. Similarly, as the company operates on a large scale, ISF’s quantum of produce is high. This gives the company the negotiating power on the price. “In the procurement market, a local trader generally buys the paddy from farmers and sells it to rice mills. We sell directly to the rice mills. This gives us a 10 to 20 per cent benefit on the price,” says Vasanth Kumar.

ISF relies more on a scientific approach to farming and technology, to increase productivity and minimise expenditure. “As the field staff are agriculture graduates, they are able to guide us in improving productivity. Using certified seeds has increased the yield,” says farmer Sridharan. “Earlier, the yield was 35 bags of paddy per acre, with a bag weighing 63 kilograms. Now it’s a minimum of 40 bags. Once I harvested 53.5 bags.”

According to Sridharan, previously, when farmers like him observed crop stress, they would not know the cause. They would spray three or four pesticides available locally, with the hope that one of them would abate the problem. “There is no penetration of technology in agriculture in India. Farmers know there’s crop distress only on visual observation. But an aerial view in variation of colours gives a better idea,” Vijaykumar explains. ISF uses a drone-mounted multispectral camera that takes images in multiple shades of green. Using a special software, the ISF team analyse the images and identify whether the colour variation is due to weeds, moisture stress or disease. The exact diagnosis helps the farmer apply the appropriate solution only in that part of the field which needs it. This results in considerable cost reduction.

ISF ensures that the farmers are benefitted the most. Depending on the risk and work involved, the profit is divided as 80:10:10 or 60:20:20 between farmer, investor and ISF. As it is a zero financial investment for the farmer, if a crop fails, the loss is borne only by the investor and ISF. The farmer merely loses time and efforts.

Sridharan recalls a flood that occurred, when he thought he would lose his crop. “But ISF salvaged it, and I got 57,000 rupees as profit. If not for ISF, I would have borrowed money, and the profit wouldn’t have been enough to repay it,” he says. A detailed costing by the brothers shows that on average, an ISF farmer gets a minimum net profit of Rs 11,500 (138 euros) per acre per crop cycle, whereas a farmer following conventional methods earns a net profit of Rs 5,000 (60 euros). The net profit varies according to the crop that is cultivated.

Gokulavan Jayaraman, who works in an Information Technology-enabled Service (ITeS) company in Chennai, is one of the urban investors. He gets about five to six per cent returns on his investment.

ISF identifies a lead farmer to collaborate with. The success of the partnership brings in more farmers. Sometimes ISF identifies farmers with the help of local non-governmental organisations working in the farming sector, and also with the support of field staff. The team do a complete background check before taking a farmer on board. ISF signs a contract with each farmer and a separate contract with each investor, to make things binding for everyone.

Initially one could invest in multiples of Rs 5,000. Now the company encourages investment in multiples of Rs 25,000. Depending on the amount invested, ISF maps it to one or more farmers. “If a farmer has five acres, money from five or six investors goes towards his cultivation expenses,” says Vijaykumar. A technology platform assists the brothers in keeping track of each investment and each crop. This helps them e-mail investors on a regular basis to keep them abreast of the farming activities.

The brothers have been growing single harvest grains and pulses. Starting with cultivating paddy, they have now advanced to growing maize, groundnut and vegetables, besides water melon and musk melon. Soon they plan to do value addition and sell directly to consumers via an online portal. “There are many, especially in the IT field, who are interested in agriculture and feel the need to address rural distress. They lack time. There is no-one to point them in the right direction. That’s where ISF scores and is a success,” opines Gokulavan. Listening to the farmers voicing their concerns at the farm meeting prompted him to invest in ISF. He also got a handful of his friends to invest. After his initial investment, he has made additional investments twice. “One should not invest with the sole aim of profits. Investing in agriculture through ISF helps one play a part in alleviating farm distress as well as getting a reasonable return on investment,” says Gokulavan.

ISF’s innovative business model of urban investment and nil risk for farmers and its ensuing success attracted media attention. The company’s social media engagement also garnered interest among the public. Their success being evident in the four years they have been in operation, increased urban investment has enabled them to bring more than 200 farmers and 600 acres of land under the ISF umbrella.

Jency Samuel is a freelance journalist based in Chennai, India.
Contact: jencysamuel@gmail.com