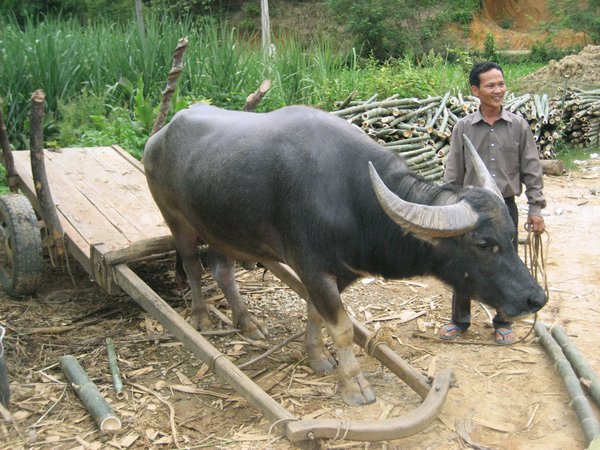 A path of trial and tribulation

Although cooperatives in Vietnam are recognised as independent legal entities nowadays, a large number of them have been unable to successfully make the change from the planned to the market economy. A new draft law could worsen the situation. Here, the German Cooperative and Raiffeisen Association (DGRV) is attempting to take countermeasures.

A comprehensive government development and promotion strategy for cooperatives is in place in Vietnam. It provides financial support, although it does not cover the entire economic environment of cooperatives. A third of all cooperatives, most of them farmers’ cooperatives, are not showing satisfactory economic results; for them, the transformation process from the planned economy to an economy oriented on the market has been less of a success. There are a wide range of reasons, although four general factors can be referred to as the chief problems: poor capital resources, insufficient competitiveness, an insecure agricultural infrastructure and a lack of qualified cooperative management.

An important step: the new Law on Cooperatives

With the onset of the far-reaching reforms in 1985 and the radical market economy transformation of the entire institutional environment, known as Doi Moi, which is Vietnamese for “renewal”, the cooperatives had to initiate a change from state-dominated compulsory collectives to a flexible form of society with a private sector. Given mistrust among the population stemming from the days of the planned economy, drastic compulsory liquidation, the partial loss of savings deposits and a latent non-recognition as market- and member-oriented enterprises, the image of cooperatives continues to be distorted, and government attempts to interfere prevail. The adaptation of the Law on Cooperatives in the 1990s with the support of Deutsche Gesellschaft für Technische Zusammenarbeit (GTZ) and the German Cooperative and Raiff­eisen Association (DGRV) represented a major step, giving the cooperatives the status of independent legal entities vested with all rights and responsibilities and smoothing the way for new start-ups of entrepreneurially oriented cooperatives. This has resulted in many successful cooperatives in various sectors, especially where activities are market-oriented.

However, official institutions largely still regard cooperatives as mere instruments rather than as enterprises performing important roles in rural areas and offering many sections of the population (peasants, artisans, etc.) economic advantages for their members’ businesses. The prevailing opinion that cooperatives are “collective enterprises” and, connected to this, their being associated with elements of the planned economy, is however leading to the significance that the cooperatives can gain in the market economy – especially regarding market access for members – often hardly being recognised or even negated. Based on a one-sided expectation of the positive social effects that cooperatives promise, their general mission is interpreted as that of having to serve the community and realise a superficial fulfilment of members’ needs in the context of a subsistence economy. Owing to the dual nature of the cooperative as a voluntary association of individuals with a common business, problems may arise particularly in the context of implementing the legal framework and the cooperative principles, so that it is especially government authorities that tend to interfere with the independence of cooperatives and further restrictions. This is a problem that can still be observed in many countries where the governments are seeking to achieve an optimum of external effects by very strongly integrating cooperative approaches into direct government measures, thus intervening in the independent self-administration of cooperatives while simultaneously making excessive demands on their competitiveness.

Now a revised version of the Law on Cooperatives is pending. On the initiative of the responsible Ministry of Planning and Investment (MPI), a revised version is to be submitted to the National Assembly tabled for approval before the end of 2012. What is behind this is that the Ministry has established that the cooperative sector is not developing satisfactorily, maintaining that the chief cause is the decline in the sector's contribution to the Gross Domestic Product and the insufficient effectiveness of the subsidies paid. Many representatives of the cooperative sector regard this argument and justification for revising the law as well as the highly impractical drafts as a retrograde step. For example, a “cooperative” is no longer equated with an “enterprise”, as is still stipulated in the valid law. This would entail many disadvantages and obstacles on the markets for most of the cooperatives. Access to the financial market is already strongly restricted for farmers’ cooperatives since they can hardly fulfill some of the conditions set by the banks for the award of a credit (e.g. audited annual accounts, the provision of securities). If cooperatives are denied their entrepreneurial status, it has to be feared that the conditions for borrowing will worsen further still and that owing to a loss of their positive image, they could encounter difficulties in taking on qualified staff who are of considerable importance to future developments. The sales markets would be affected, too. In addition to partly inefficient quality and marketing systems, many partners on the market only expect to enter business relations with business partners who are on an equal footing.

The issue of government control

Cooperatives also have a reputation of being “schools of democracy”. However, in many countries, strong democratic grassroots efforts bear a high political risk. Cooperatives, which cannot be covered and controlled by the mass organisations of the state apparatus, are often regarded as a threat to the socialist state itself. This mistrust results in political groups fearing a loss of power or control over cooperatives. In their present stage of development, government support is important for the cooperatives, but the governments’ inflexible clinging to financial subsidies results in members of cooperatives relying economically on government support and not taking any entrepreneurial initiative. Thus the Ministry of Planning and Investment’s policy of increasingly addressing the inequality between cooperatives and other types of enterprise ought to be welcomed, although a policy of intervention leads to dependence. If a cooperative has the character of an enterprise, it can lay claim to being independent and being able to act without government intervention.The reasons for failure  are elsewhere.

In reality, the poor results of cooperatives occur at an entirely different level. Locally, existing scope is not made proper use of; largely, members lack the knowhow to actively contribute to the decision-making process of the cooperative and perform effective control of its bodies. In many places, the civil society foundations and conditions provided for the communication and co-ordination processes are not mature or may even be non-existent. So far, the more than 50 central cooperatives in Vietnam have not succeeded in raising the cooperatives’ share of the value added chain in agricultural produce, since the downstream manufacturing and finished-product sectors continue to be dominated by government-owned enterprises and the subsidiary sharing of activities by primary and central cooperatives has not yet reached maturity.

The work of the DGRV

The German Cooperative and Raiff­eisen Association DGRV has been operating in Vietnam for several years and supports the farmers’ cooperatives in various areas:

The consultancy measures have given the cooperative notion, which is based on the self-help approach, a new edge, with the activities of other specialist organisations certainly facilitating synergy effects, too. Of course these developments will also have their limits as long as the sometimes myopic view of decision-makers in the cooperatives prevents long-term opportunities from being made use of or when authorities wrongly fear a loss of power. Thus well-meant strategies to promote cooperatives can counteract one another. What counts is to give support strategies a comprehensive orientation and work at different levels and in different areas at the same time: in the financial and the real sector, in organising value added chains, but ultimately also in a strict business strategy in every cooperative in order to attain economic and hence also social effects.