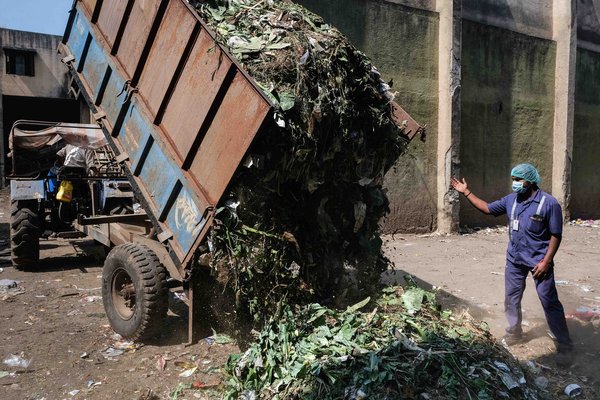 A lorryload of organic waste from close by the city arrives at the waste treatment plant in Nashik. The plant has the capacity to produce up to 100 tons of city compost daily.
Photo: Ronny Sen/GIZ

City compost in India – from waste to healthy soil

Waste management and soil degradation are two of India’s most pressing environmental concerns. The Indian state of Maharashtra, together with two GIZ projects, tackles both through one market mechanism – ‘city compost’. Urban municipal waste is composted and used as organic fertiliser in agriculture. This relieves the cities’ waste management and enhances rural soils and in turn productivity.

In India, over 377 million people live in almost 8,000 cities or towns. They generate 62 million tons of municipal solid waste annually, according to the country’s government. More than 80 per cent is disposed indiscriminately without treatment at dump yards in an unhygienic manner. In the Indian countryside, ecological sustainability of agriculture has been at risk due to an excessive use of chemical fertilisers and monoculture since the ‘Green Revolution’ led to a degradation of land. Carbon concentration in India has decreased to a minimum. This causes crucial problems as carbon improves soil health, releases nutrients and protects plants against harmful substances. More than half of India’s land is already reported to be degraded.

From the countryside to the city and back

One clever solution to both problems is city compost. Organic waste is collected in the cities, recycled and processed to compost and finally used as organic matter by farmers complementing the traditional farmyard manure. Thereby, carbon nutrient in the waste gets back to the soil to enhance agricultural production. The two Deutsche Gesellschaft für Internationale Zusammenarbeit (GIZ) projects “Green Innovation Centre for the Agriculture and Food Sector” and “Soil Protection and Rehabilitation for Food Security (ProSoil)” support the implementation. Both projects are part of the special initiative “One World – No Hunger” led by the German Federal Ministry for Economic Cooperation and Development (BMZ). GIZ develops business models such as the city compost model reaching the farmers and improving their soils, builds capacities for quality assurance of compost and conducts pilot interventions for innovative products made of waste.

Some of the compost is further processed into value-added products such as phosphate rich organic manure (PROM), to which nutrients have been added. Its quality is certified by HARIT – an initiative of the State of Maharashtra. Farmers’ groups buy such products in bulks to reduce their costs and distribute them to their farming members. The application of city compost is embedded in a full innovative package of practices developed by GIZ that includes mechanisation, drip irrigation and other technologies. This cycle creates business for urban producers and farmers’ groups while simultaneously increasing productivity and soil health on Indian farms since the compost from the urban waste stream provides better results than conventional manure.

City compost is an innovative approach that closes the loop of carbon and nutrient flow from soil back into soil. At the same time, Maharashtra makes use of the 22,300 tons of municipal solid waste emerging daily, up to 45 per cent of which is organic. A single average city in Maharashtra can therefore provide nutrient and carbon for about 14,000 hectares of land annually.

“The new compost allows our potatoes to withstand more moisture stress during the dry spell, as it increases the water holding capacity of the soil. Compared to our conventional farm yard manure it is also better decomposed and does not lead to any fungal diseases, as the compost is treated with fungicide,” says farmer Vilas Darekar Papalwadi.

While farmers produce their own farmyard manure at a cost of 1,600 Rupees (Rs.) per ton (20 euros) or buy it at Rs. 2,350 per ton (30 euros), city compost costs about Rs. 2,300 per ton including transport. One option to bridge this gap was found by the Indian government – the State Ministry of Chemicals and Fertilizers subsidises the production of city compost, so it can be an affordable organic matter complementary to farm yard manure. GIZ not only supports facilitation with government agencies for subsidies but also links farmers’ groups and urban producers directly. The response is positive: “Urban compost provides a great alternative as a soil fertility enhancer. After experimentation with a few lead farmers, we see a growing demand for this compost. This year, we are procuring 160 tons of compost from the city Nashik,” maintains Somnath Gorakh Palve, Director of a farmers’ group.

Since April 2018, GIZ has been carrying out the implementation of the city compost project and is now entering in the phase of standardisation for further upscaling. The initiative is in line with India’s political priorities, such as the nation-wide campaign Clean India for sanitation or the goal of the government to double farmer’s income by 2022. At state level, the Department of Agriculture is keen to take up the idea, and even the Indian National Bank for Agriculture and Rural Development is keen to promote the viable business models through its network.