35 per cent of all farms are in China.
Photo: FAO/F. Botts

The evolution of global farmland distribution

Land plays a crucial role in rural transformation. However, information allowing a comparison of number, size and distribution of farms and farmland throughout the world and, above all, showing how these factors are changing over time is difficult to come by. FAO researchers evaluated agricultural census reports from 167 countries and have arrived at some interesting results.

In order to better understand rural transformation, it is important to know how average farm size and farmland distribution have changed over time in each region of the world. This is above all also interesting with regard to what might be expected when countries move to higher levels of economic development. First of all, however, we have to define more precisely what we mean by “farm”. 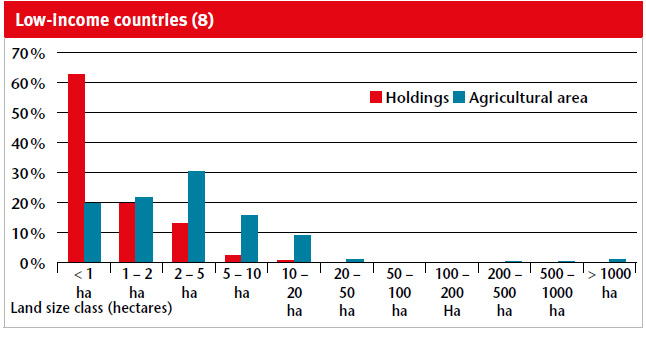 In our work, we used the agricultural holding as defined in the World Census of Agriculture (WCA) guidelines, according to which an agricultural holding comprises the “units of crop and livestock production which are under single management (regardless of ownership) by either an individual or group of individuals, a household or several households, clan or tribe, corporation, cooperative or government entity” (FAO, 2005). We defined the farmer as the agricultural holder, that is, the person who makes strategic decisions regarding use of the farm resources and who bears all risks associated with the farm, but who may not necessarily assume day-to-day work management responsibilities. 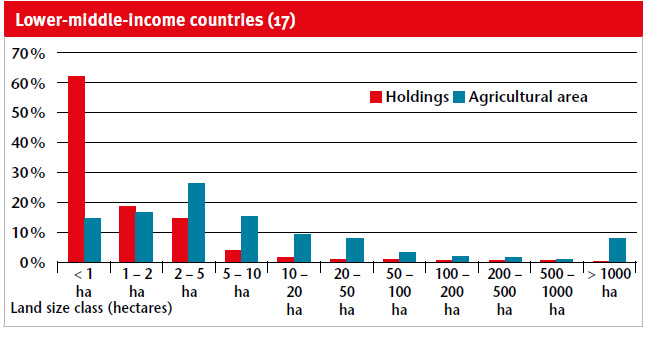 Globally, about 84 per cent of farms are smaller than two hectares, and these farms operate around twelve per cent of farmland (see Figure above). In other words, only 16 per cent of the world’s farms are larger than two hectares, but they represent 88 per cent of the world’s farmland. Considering farmland distribution by income group, we see that smaller farms operate a far greater share of farmland in lower-income countries and regions than in higher-income countries and regions (note that this includes 87 countries for which we have tabulations of the number of farms as well as farmland distribution by farm size; as a result, China is among those countries excluded from the Figure on the left). In the low- and lower-middle income countries (which are located primarily in East Asia and the Pacific, South Asia and sub-Saharan Africa), about 80 per cent of farms are smaller than two hectares, similar to the global average, but they operate a much larger share of land, about 40 per cent. 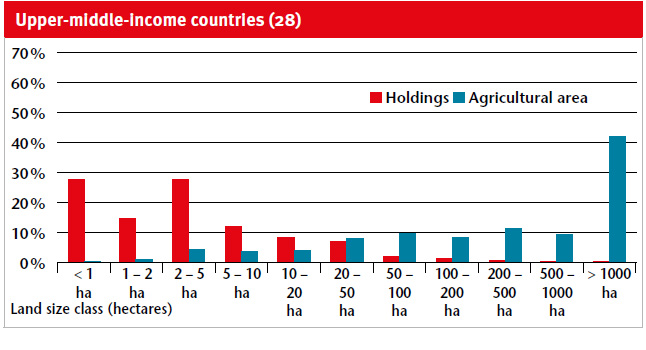 In upper-middle-income countries which are primarily located in Latin America and the Caribbean and the Middle East and North Africa, and in high-income countries, only about 40 to 50 per cent of farms are smaller than two hectares in size, and they operate less than five per cent of farmland. This pattern suggests that the share of farmland managed by small farms decreases as average income levels rise. That is, it suggests that farms consolidate as economies develop. 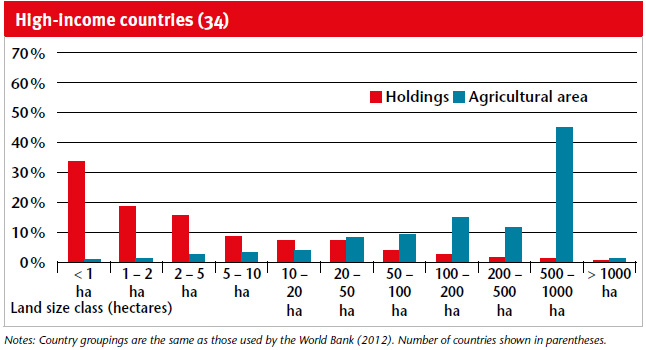 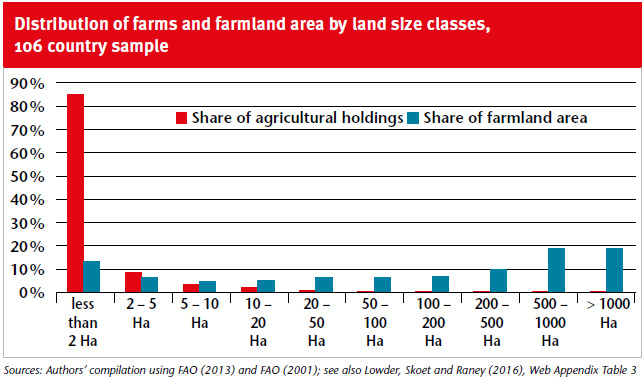 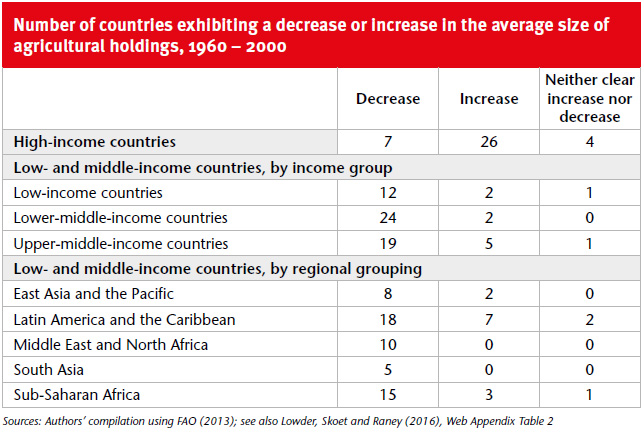 In summary, the following key findings can be deduced from this data:

Furthermore, the surveys indicate that there is room to improve data. Continued efforts to enhance the collection of up-to date, comprehensive and more standardised agricultural census data are essential to having a more representative picture of the agricultural sector world-wide. It would seem appropriate to redouble efforts to make farm-level agricultural census data more easily accessible to researchers as well as to encourage all countries to conduct comprehensive agricultural censuses which either sample or enumerate all types of farms throughout a country. For countries that limit agricultural censuses to a survey of household farms only, the international community might consider conducting supplementary surveys to consider corporate and government owned enterprises as well as household farms.

The views expressed in this publication are those of the authors and do not necessarily reflect the views or policies of FAO.

The best available data for an analysis of the number, size and distribution of farmland are collected through the Programme for the World Census of Agriculture (WCA). The Food and Agriculture Organization of the United Nations (FAO) has promoted the WCA since 1950 by providing governments with guidance on standard methodology and contents for their agricultural censuses, and new agricultural census reports are constantly being made available. FAO’s State of Food and Agriculture 2014: Innovation in Family Farming analysed agricultural census reports to provide the most comprehensive overview to date of the number, size and distribution of farms and farmland for countries around the world by income level and regional group. This article summarises key results of this work.

Data from 167 countries were used to estimate the number of farms world-wide. These countries represent 96 per cent of the world’s population, 97 per cent of the population active in agriculture and 90 per cent of agricultural land world-wide. The resultant estimate of the total number of farms in the 167 countries came to nearly 570 million. For many reasons, including a lack of estimates for about 40 countries and the fact that many of the estimates for lower-income countries are quite old, we expect that the actual number of farms in the world may be larger than this 570 million estimate. For distribution of farms and farmland world-wide, as well as changes in farm size over time, the sample included just over 100 countries which are largely representative of the world’s agricultural population.