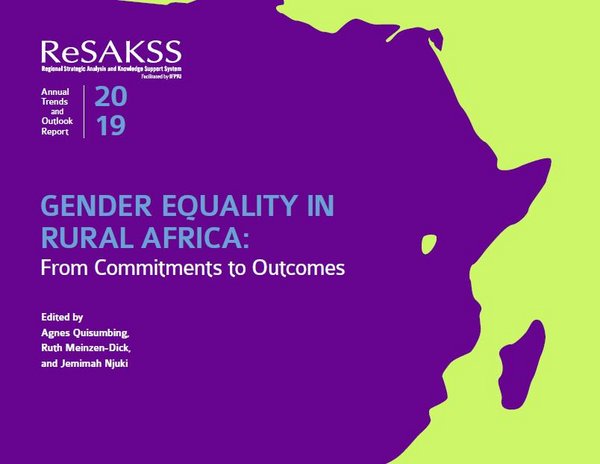 Gender Equality in Rural Africa: From Commitments to Outcomes

A new report highlights the need for gender equality to achieve agricultural growth goals in Africa.

Many African governments have committed to promoting inclusive agricultural growth in recent years, but their efforts often neglect the key role played by gender, according to the report 2019 Annual Trends and Outlook Report (ATOR) “Gender Equality in Rural Africa: From Commitments to Outcomes” published in November 2019 by the Regional Strategic Analysis and Knowledge Support System (ReSAKSS), a programme facilitated by the International Food Policy Research Institute (IFPRI).

The report highlights the many costs of gender inequality at all levels: from the individual to the household, the community, and the nation. Evidence shows that gender differences are affecting African countries’ ability to meet their goals of ending hunger, reducing poverty, boosting trade, and increasing resilience to climate change and other risks.

Gender norms and inequality have led to disparities in men’s and women’s incomes, assets, productive capacity, human capital and overall well-being, the report says. For example, women continue to have less secure land tenure than men. Despite recent gender-friendly land reforms in several countries, women’s access to land is decreasing in some places.

Women also have less access to financial services and products. Although services such as credit, savings and insurance can enhance women’s economic prospects, the gender gap in financial inclusion is often worsened by women’s lack of access to mobile phones, their lower literacy levels, and the norms that limit women’s mobility and ownership of assets.

Closing the gender gap in agriculture

To close the gender gap in agriculture, countries and development practitioners face an overarching need for better data on the influence and impact of gender. In the aspiration to eliminate hunger and poverty, rural women and girls in Africa south of the Sahara are a key demographic, but data on many aspects of their lives are lacking.

ATOR highlights the Women’s Empowerment in Agriculture Index (WEAI) as a reliable tool for measuring and tracking changes in women’s empowerment over time and across countries, regions, and population subgroups.

Data and evidence, from tools such as the WEAI and on other indicators as well, can empower policymakers to move beyond commitments to equality and into integrating gender into programmes and policies. Research shows that well-designed policies can simultaneously enhance gender equality and development outcomes by harnessing the untapped potential of women and girls.

To build upon the evidence in ATOR, researchers point to additional areas of work, including the need for more attention to women’s participation in parts of the agricultural value chain beyond growing crops, such as their roles as processors, traders, exporters and consumers. New research is also needed to identify how best to support women entrepreneurs in agriculture.