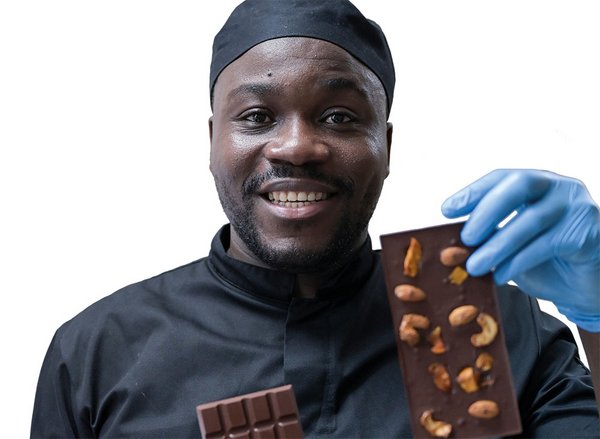 Chocolate made in Africa – the start of a small revolution?

By exporting raw materials, many African countries are still giving away the opportunity to generate value at home through a processing industry of their own. The cocoa sector is one of the areas in which this applies. Some entrepreneurs are now starting to explore the market for themselves. Is there a future for chocolate made in Africa?

Côte d’Ivoire is the world’s largest producer of cocoa. Each year it harvests more than two million tonnes of cocoa beans; this is around 40 per cent of the global crop. Until recently, though, there was not a single manufacturer in the country itself that was turning the coveted beans into powder, butter and – in particular – chocolate. Almost the entire crop was exported – and then in some cases re-imported as chocolate.

Axel Emmanuel Gbaou felt that that needed to change. A few years ago he left a well-paid job in a bank in France and set up his own small business, “Le Chocolatier Ivorien”, in Côte d’Ivoire’s largest city, Abidjan. Emmanuel’s parents were cocoa farmers – but he stresses that that is nothing special. “Everyone in our country grows cocoa.” Even the country’s president Alassane Ouattara and the football star Didier Drogba have invested some of their wealth in cocoa plantations.

Cocoa was also the basis of the “miracle ivorien”, the Ivorian economic miracle. Unlike many other African countries, Côte d’Ivoire did not plunge immediately into crisis after gaining independence in the 1960s. For twenty years it notched up economic growth of around ten per cent per year – growth that hinged largely on the development of agriculture. By the second half of the 1970s the country was already the world’s largest producer of cocoa. The economy only started to falter when world market prices for coffee and cocoa tumbled from 1978 onwards. At the same time, necessary reforms were neglected while the aging long-term president, Félix Houphouët-Boigny, was in office. Côte d’Ivoire remained in thrall to the old colonial power, France.

Not enough wealth stays in Africa

Africa still exports too many resources and does not manufacture enough products itself. In the case of cocoa this seems to be gradually changing. Several African businesses have been founded recently, albeit often in cooperation with European partners. From Ghana comes a chocolate called “Fair Afric", while Ghana’s neighbour is the home of the “Choco Togo” brand. “Of the two million tonnes of cocoa produced in Côte d’Ivoire each year, at least a small proportion can remain here in the country,” comments Axel Emmanuel. Nevertheless, the competition remains huge – not least because the exported cocoa is an excellent source of revenue for the Ivorian government. Taxes and export duties ensure a plentiful flow of money into the state coffers.

But international confectionary corporations have started to acknowledge their responsibility. The World Cocoa Foundation has adopted a Cocoa Action strategy, which is supported by nine major companies including Nestlé, Mars, Mondelez and Ferrero. The stated aim is to abolish child labour and poor wages. On the other hand, in its analysis of the cocoa trade, Germany’s Südwind Institute is among those that criticise the strategy on the grounds that much still depends on companies’ good will and voluntary commitments. Despite legislation prohibiting child labour, an estimated two million children still work on cocoa plantations in Côte d’Ivoire and Ghana.

And prices are still far too low to provide cocoa farmers with a secure living. “On the TV they say that we farmers are paid 1,000 francs per kilo of cocoa beans,” says Nanan Yao Kouassi, who owns a small cocoa plantation in the village of Louloukro, not far from Yamoussoukro, the capital of Côte d’Ivoire. “But that’s not true.” In Kouassi’s view the state cocoa authority needs to turn its attention to prices and stabilise them throughout the country so that the producers can live from what they grow. “Regardless of what they say on the TV news, we only get 700 francs per kilo.” 655 West African francs are equivalent to one euro.

Chocolatier Axel Emmanuel sees in this one of the main problems. “In our region it is unfortunately the case that people don’t have enough entrepreneurial spirit. They sell their goods straight away because they need the quick money.” The farmers are often forced to do this by poverty, and shrewd middlemen exploit their plight. Axel Emmanuel is working on alternatives. For example, he organises courses for women in the villages. “They need to learn how to roast the cocoa beans themselves after harvesting.” Roasted beans command a higher price. Axel Emmanuel buys his beans roasted, sourcing them direct from local producer groups. “I pay them the equivalent of five euros per kilo.”

He hopes that this will stimulate the domestic economy. He advertises himself and his wares on the Internet with the catchphrase “Cocoa revolution”; in France he has business partners who deal with sales to Europe.

The young entrepreneur also wants to see his chocolate take off on the Ivorian market. But isn’t chocolate far too much of a luxury product that not everyone can afford? The farmers themselves eat fish or grilled chicken with rice. Not chocolate, surely? On the contrary – there are more and more customers in Côte d’Ivoire too, says the chocolatier. This is the case, for example, in Abidjan with its high-rise office blocks and its housing projects in which the growing middle class is taking up residence. People buy less street food there. Instead they go to the supermarket, where they find imported goods from Europe and Asia – and, increasingly, the chocolate made in Côte d’Ivoire as well.

While Axel Emmanuel is showing how his staff make chocolate, other workers are preparing the wrappers. These are specially ordered from a printer, with a striking design in African patterns. “This order is going to the USA,” says the chocolatier. The customers there are emigrants from Côte d’Ivoire. They have become wealthy in America and want to demonstrate that. So they treat themselves to a delicious product: chocolate from Abidjan. The taste of home, going out into the world.

Christian Selbherr is an editor and journalist with “missio magazin”, a journal published by the Catholic aid organisation missio, based in Munich, Germany.
Contact: mail@christian-selbherr.de