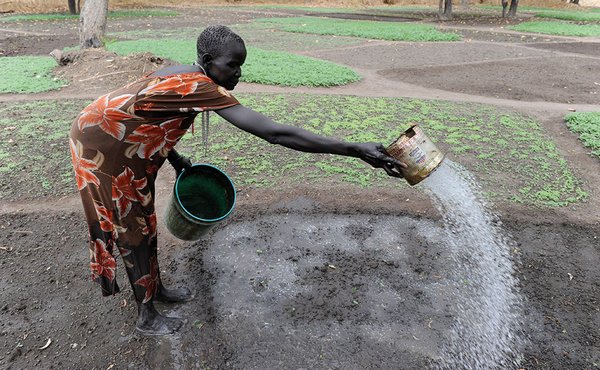 Food systems across the globe range from traditional subsistence to globalised modern ones.
Photo: Jörg Böthling

Food systems – beyond the buzz

Food systems and the need for their transformation were already being debated before preparations were underway for the UN Summit addressing this issue. But do we all mean the same thing when we talk about food systems? And in which direction precisely should transformation go? Our authors show how far the discussion has progressed.

A food system is typically defined in two ways. First, it can be described based on how food moves, starting with soil, seeds and production through processing, distribution to markets onto people’s plates and, finally, to waste. In more globalised food systems, these movements are regularly linear food chains with few connections between processes. In more localised regional or territorial agroecological systems, this movement of food and materials is more circular, and is often referred to as food flows.

If we consider how food is grown and what people eat, food systems run broadly along two tracks. In one system, peasant farmers produce food for themselves and their communities. It is estimated that more than 500 million peasant farmers produce over 70 per cent of the food in the world. These farmers often use agroecological growing to produce more biodiverse, traditional foods that are integrated into local, regional or territorial socio-ecosystems. As too many of the farmers operate in a political system that does not support local, small-scale farming, they can face precarious circumstances and struggle to ensure their own food security.

The other track grows food in plant and animal monocultures using chemical inputs and increasingly proprietary seed as well as digital and mechanical technologies. These food systems place the burden of risk on farmers in a vertically integrated system that concentrates wealth away from farmers towards multinational corporations. In many cases, such farms operate on the edge of profitability, relying on off-farm family income, migrant labour and government subsidies to keep them going. While multinational food companies have made billions during COVID-19, there is constant concern about the wellbeing and rights of millions of small-scale producers, processors and marketers.

What do/ can food systems do?

Food systems contribute to or impede resilience in the face of pandemics, climate change, other shocks and hazards. In the same way that food systems can undermine environmental and community wellbeing, they can also be spaces for change. In the case of the climate crisis, up to 37 per cent of human greenhouse gas emissions result directly from the global food system. Pre-COVID, nearly 750 million people were experiencing food insecurity in some form, with an estimated 132 million additional individuals facing undernourishment due to the pandemic. Biodiversity for food and agriculture is declining as we concentrate our diets on fewer and fewer crops, and farm in ways that adversely impact surrounding species. Up to 577 billion US dollars in crops are at risk annually due to pollinator loss, while 23 per cent of land areas have seen decreased food productivity. On the flipside, sustainable food systems offer the potential to activate solutions to our most pressing challenges. They can sequester carbon to help mitigate climate change, foster healthy biodiverse agroecosystems, protect human rights and the land, respect Indigenous peoples’ rights and enable livelihoods based on community-scale growing, processing and access. On a territorial scale, they can provide integrated, coherent opportunities for socio-economic and ecological system health.

The science and politics of food systems

There are different kinds of knowledge that inform food systems. Indigenous and traditional knowledge dates back millennia, based on an intimate co-evolution between people and the land (also see Box). Often the relationship to the land is tightly bound to cultural practices and traditions, with land stewardship important to cultural identity. Western scientific knowledge, on the other hand, is largely grounded in reductionist principles and is too often used as a tool to control nature with detrimental effects. While western science has brought us increased yields, it has also resulted in many negative social and environmental externalities. And, coupled with corporate food processing and marketing, it has precipitated a global health crisis through the creation and distribution of ultra-processed foods.

Ka’a’gee Tu First Nation (KTFN), a small Indigenous community in Northwest Territories, Canada, work towards a sustainable food system through their traditional hunting, fishing and gathering, as well as by introducing gardening and agriculture into their practices. KTFN’s traditional food system includes hunting for moose, caribou and other wild game, subsistence and commercial fishing, and gathering berries and other traditional foods from the land. This food system has allowed this community to live within the boreal forest ecosystem in a sustainable way for time immemorial. The community maintain this part of their food system through advocating for their land and other Indigenous rights, active monitoring and research on changes to their ecosystem from climate change and development pressures, and through fostering intergenerational knowledge sharing of traditional practices between youth and elders. KTFN have introduced gardening and agriculture into their food system to address food insecurity and adapt to an increasingly warmer climate. Currently, they have community gardens, a greenhouse and a composting facility. They have also partnered with researchers to explore agroecological practices that incorporate their Indigenous knowledge, support boreal forest biodiversity, maintain or increase carbon sequestration and create livelihoods that deepen their connection to the land.

Politics are key to the transformation needed to move towards sustainability. There are countless multi- and bilateral agreements that foster and support the existing corporate, globalised food system with a glaring lack of respect for the Right to Food. These agreements impede, for example, public purchasing by government-funded institutions as a demand-side stabilising tool for small-scale farmers and food businesses. Siloed government bureaucracies are also challenged to navigate and enact a food systems approach as an integrated matter of health, community and environmental wellbeing. And governments and sectors across scales are challenged to work together. While food can break down these silos, this requires commitment. City Region Food Systems (CRFS) are an example of a territorial approach that uses agroecology to increase social inclusion and provide food security to vulnerable groups (see Box).

Quito, in Ecuador, participated in a test of the City Region Food Systems approach (FAO-RUAF) to assess their food system and determine a systemic path towards sustainability. The analysis and diagnostic results promoted greater understanding of the city’s food system and led to actionable changes. The work in Quito is led by the participatory urban agriculture project, AGRUPAR, through the economic promotion agency, CONQUITO. AGRUPAR provides vulnerable members of the community with urban agriculture support for self-consumption and for sale at local markets. This project successfully supports economic development and food security of Quito residents, as well as promoting rural and urban linkages. AGRUPAR not only supports individuals and families in the city, they work towards macro-level food policy changes. Many stakeholders from across the city came together to form the Agro-Food Pact of Quito (PAQ), a platform that promotes its sustainable food systems. The City’s participation in the CRFS process has increased governmental awareness of its food system dynamics, influenced the integration of food in the city’s resilience strategy and its Vision 2050 consultations, helped build the first food strategy in all of Ecuador, and supported Quito in moving towards sustainable food system transformation.

Designing and planning for sustainable food systems happens best when processes are participatory and empowering for all citizens, but particularly for those most left behind, including indigenous, women, youth, LGBTQ+ and disabled people. Their active participation creates community-defined food systems that uphold the Right to Food and address different peoples’ needs and priorities. Examples of inclusive engagement include participatory frameworks for certification, risk assessment, plant-breeding and research (also see Box).

Cuba is widely recognised as a global leader in the development of agroecological food systems. The Project to Strengthen a Local Agricultural Innovation System (or PIAL for its initials in Spanish), housed by the National Institute of Agricultural Sciences, plays a large role in supporting Cuba’s transition to agroecology. PIAL began in 2001 with a focus on participatory plant-breeding – a methodology that involves local farmers sharing heirloom seed varieties with each other, experimenting on their farms, and increasing the genetic diversity of their crops. The Cubans quickly realised they could use the same participatory methodology to support farmer-led innovation and knowledge-sharing in other areas of their food system as well. By 2021, the PIAL programme was operating in 75 municipalities across the country, fostering participatory generation and sharing of agroecological innovations that preserve seeds, water, soil, and biodiversity, support small-scale farmer livelihoods, and provide healthy food to communities. The programme has a strong emphasis on gender empowerment and social equity, and it encourages active participation and leadership from women and youth as well as men in agricultural communities. It has helped build human, social, cultural and natural capital in Cuba, and has contributed to many sustainable food system outcomes, including: increased crop and dietary diversity valuing locally-adapted seed varieties and traditional foods; climate change mitigation, e.g. through reduced reliance on carbon-based agricultural inputs; decreased agrochemical use; improved resilience for agroecosystems, families and communities, e.g. through diversified on-farm species and varieties as well as new income sources; greater social equity in farming households and communities; and increased collaboration between small-scale farmers and scientific institutions.

This year presents a unique convergence for food systems as the development of the Global Framework on Biodiversity, COP 26 and the UN Food Systems Summit (FSS) all build to the autumn of 2021. Within the FSS process, not only is there pressure to reform agricultural subsidy programmes but also an increasing interest in how to scale up agroecological principles and practices. This convergence is important as, while agroecology thrives in some communities despite detrimental trade and subsidy programmes, it can be adopted and supported more widely through global knowledge sharing networks amongst small-scale farmers, pastoralists, Indigenous folk, fishers and others.

While bringing agroecology into the mainstream could be a pivotal moment for food systems, it also risks (re)defining and co-opting the concept. If this happens, the central connection to the environment, community and a more equitable economy could decouple agroecology from its holistic foundations. As a case in point, the UN Committee on World Food Security (CFS) recently passed the Policy Recommendations on Agroecological and Other Innovative Approaches. While agroecology was originally proposed by the civil society mechanism within the CFS, due to the insistence of other key actors, the guidelines were bundled with high-tech solutions, such as climate-smart agriculture.

The FSS has begun to incorporate agroecology into its ‘game changing solutions’ despite it being absent from earlier iterations. Through the five different Action Tracks of the Summit, solutions have been raised to help implement and scale up different elements of agroecology. The tie between the CFS and the FSS can be seen most vividly in Action Track 3’s Solutions Cluster on ‘Transformation through Agroecology and Regenerative Agriculture’. While Action Track leadership has integrated findings of the CFS, how this will be championed at the FSS is still to be seen.

Alison Blay-Palmer is the UNESCO Chair on Food, Biodiversity and Sustainability Studies at Wilfrid Laurier University in Canada.
Contact: ablaypalmer@wlu.ca

Andrew Spring is the Executive Research and Partnership Lead with the UNESCO Chair.
Erin Nelson is Assistant Professor, Sociology and Anthropology, at the University of Guelph, Canada.

Elodie Valette is a geographer at the French Agricultural Research Centre for International Development (CIRAD) in Montpellier, France.