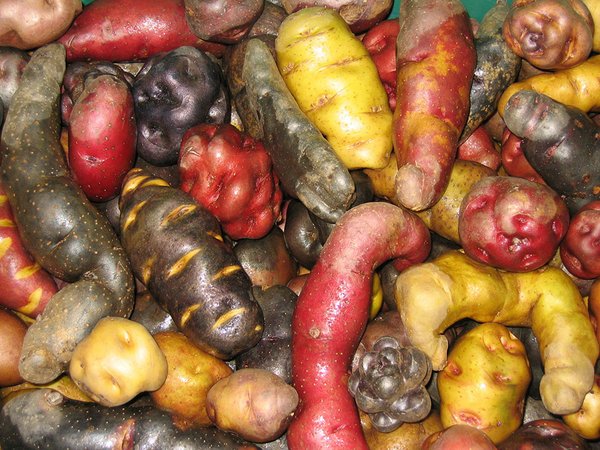 While having failed to solve problems such as hunger or malnutrition, industrial agriculture appears to be causing additional ones both in environmental and health terms. Our author calls for a transformation of the food system and highlights the key role of diversity in this context.

If the food system transformation we need could be summed up in a single word, it would be diversity. We need diversity in the field, within the farm, across the landscape, and throughout the economy. We need soil biodiversity, agrobiodiversity, wild biodiversity and dietary diversity. We need to value diverse forms of knowledge – or as Vandana Shiva put it, we must move beyond ‘monocultures of the mind’. In some ways, it is a journey back to the diversity that characterised agro-ecosystems prior to the advent of industrial agriculture. In other ways, it is a journey forward, drawing on cutting-edge knowledge to deliver highly productive, resilient, resource-efficient and multifunctional landscapes.

Industrial agriculture – an existential threat to itself?

The challenges we face require no less. COVID-19 has affected one third of food and farming livelihoods. It has added 100 million people to the world’s hungry – who already numbered 750 million before the pandemic. In addition, two billion people suffer from micronutrient deficiencies and 1.9 billion are obese or overweight. Around the world, those facing poverty and malnutrition are often small-scale farming communities.

The environmental picture is bleaker still. More than half of the world’s farmland is degraded or severely degraded, and every year an area the size of the Philippines’ cultivated land is added to the list. Runoff from fertiliser is polluting groundwater and causing vast dead zones in estuaries. Over-use of antibiotics in industrial feedlots is accelerating the spread of antibiotic resistance – predicted to be a bigger killer than chronic diseases by mid-century. Food systems are responsible for as much as one third of global greenhouse gas emissions.

How uniformity took over the world

It is worth recalling how we got here. Throughout history, humans have consumed over 7,000 species of plants as well as numerous animal species, most of them harvested from the wild. Over the last 10,000 years, a significant number of species have been domesticated and were part of diverse agricultural systems. But the 20th century saw a major reorganisation of production systems. As the ‘Green Revolution’ took hold around 50 years ago, food production systems were increasingly focused on a small number of staple crop varieties and animal breeds. They were designed for production in uniform, intensive, and highly-specialised systems. Rather than relying on diversity to keep soils healthy and mitigate risks, they opted for synthetic fertilisers, pesticides and antibiotics. While industrial food systems increased production, they have left a legacy of soil degradation, water and air pollution, greenhouse gas emissions and drastic biodiversity losses – while failing to end hunger and malnutrition.

Time for a transformation

Over the last decade, it has become increasingly clear that this trajectory is not sustainable. A profound transformation – a new paradigm – is urgently needed. This is the conclusion of landmark reports from the Intergovernmental Panel on Climate Change, the Intergovernmental Science-Policy Platform on Biodiversity and Ecosystem Services, the High Level Panel on Food Security and Nutrition, and many others. Diversity is front and centre of these calls for food system transformation. This reflects the growing evidence from around the world of what diversity can achieve, from the soil microbiome to the plate:

A unifying framework for food system transformation, with diversity at its core

Different terminologies are used to describe the transformation we need. But there is growing consensus that production systems must be redesigned and re-rooted in diversity. These approaches are captured in the 13 Principles of agroecological transformation (see Box) identified by the High Level Panel on Food Security and Nutrition in 2019, building on the ten elements of agroecology previously adopted by the UN Food and Agriculture Organization (FAO). These principles can address all situations and all scales, but their practical application is location-specific and involves continuous co-innovation between farmers and scientists. These principles provide a unifying framework for all of those redesigning and re-diversifying their farming systems, whether they refer to themselves as agroecological, regenerative, organic, or permacultural.

Policymakers looking for ‘win-win-wins’ – for social, environmental and economic sustainability, or for animals, people and the planet – should look no further than diversified agroecological systems. This is the comprehensive response to industrial agriculture, and the way out of its vicious cycles. The benefits for biodiversity are obvious, but the potential for tackling climate change is no less dramatic: the combination of carbon sequestration in soils and diverse vegetation, including trees, has the potential to transform our food systems from being the greatest greenhouse gas emitter to being carbon neutral. Indeed, diversified agroecological systems will deliver on virtually all of the Sustainable Development Goals (SDGs), and we must transition towards them, irrespective of whether the starting point is under-performing subsistence agriculture or unsustainable industrial agriculture.

In other words, it is time to stop seeing biodiversity as a necessary victim of food systems. Food system transformation starts and ends with diversity – and the time for transformation is now.

PRINCIPLES TO GUIDE AGRICULTURE AND FOOD SYSTEMS TRANSFORMATION
1. Recycling. Preferentially use local renewable resources and close as far as possible resource cycles of nutrients and biomass.

7. Economic diversification. Diversify on-farm incomes by ensuring that small-scale farmers have greater financial independence and value addition opportunities while enabling them to respond to demand from consumers.

8. Co-creation of knowledge. Enhance co-creation and horizontal sharing of knowledge including local and scientific innovation, especially through farmer-to-farmer exchange.

11. Connectivity. Ensure proximity and confidence between producers and consumers through promotion of fair and short distribution networks and by re-embedding food systems into local economies.

12. Land and natural resource governance. Strengthen institutional arrangements to improve, including the recognition and support of family farmers, smallholders and peasant food producers as sustainable managers of natural and genetic resources.

Emile Frison is a member of the International Panel of Experts on Sustainable Food Systems (IPES-Food). He focuses most of his career on the contribution of biodiversity to the nutritional quality of diets and the sustainability, resilience and productivity of smallholder agriculture.
Contact: e.frison@cgiar.org

Nick Jacobs is the Director of the Secretariat of IPES-Food.
Contact: nick.jacobs@ipes-food.org