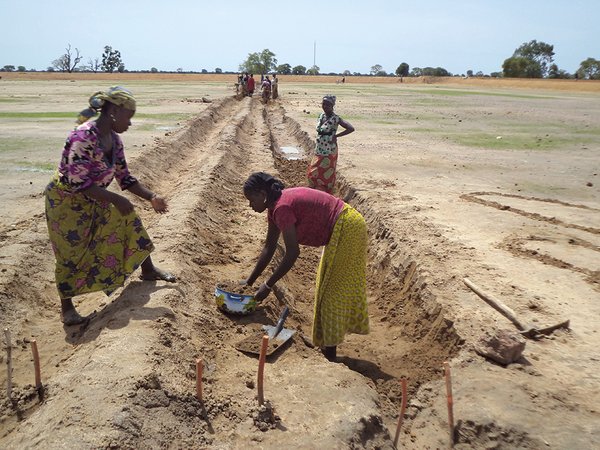 Women from the project helping to build the quaternary canal for their lots.
Photo: Sâabèsèlè Jean Augustin Somda

Strengthening family farms: a path to follow in combatting poverty in Africa

A project in Burkina Faso has given a clear demonstration of what supporting family farms can achieve in terms of poverty alleviation and rural development. One important success factor was the transfer of land to farmers, accompanied by a secure land-tenure policy adapted to their needs.

Burkina Faso is a landlocked country in West Africa with a surface area of 274,200 km². Its economy is primarily based on the extractive industries, commerce and, above all, agriculture, which employs more than 80 per cent of the population. The combination of the predominance of agriculture in the economy and the prevailing poverty of rural populations poses a problem in choosing an efficient agricultural policy. Should we favour agro-investment, or small family farms? Burkina Faso has chosen to let the two models coexist, in either the same or different projects. This choice is criticised by civil society organisations which would prefer the country to refocus its efforts on developing family farming, thereby guaranteeing food security with good nutritional quality and stimulating the local economy. This argument seems to be confirmed by the results already emerging in the Projet Développement de l’Agriculture – PDA (agricultural development project) of the Millennium Challenge Account – Burkina Faso (MCA-BF), dedicated entirely to supporting small farmers at Di in Burkina Faso’s Sourou valley. The PDA is one of four projects in the agreement signed in July 2008 by the Burkina Faso Government and the Millennium Challenge Corporation (MCC). It was designed to use family farming as a motor for economic growth in the region of the Sourou Valley (north-west of the country), and included improving access to the market, boosting productivity and animal production, reducing post-harvest losses and better access to agricultural production inputs, entrepreneurial services and access to credit. Resulting from co-operation between the USA and the Burkina Faso Government, the PDA was implemented in three villages in the commune of Di (Qué, Bouona, Di) between July 2009 and July 2014.

Within the PDA framework, the Burkina Faso authorities and the Millennium Challenge Account chose a participative approach, bringing together grassroots groups throughout the course of the project. The beneficiaries were classified in a series of concentric circles. The first beneficiaries were the people affected by the project (PAP) who owned or worked the land directly affected by the land-use activities. The second group were the women and young people of the households affected who were not directly affected themselves. These individuals were organised into 114 groups of 20 women each and 20 groups of young people. The third group of beneficiaries were the farms in the project zone’s three riparian villages which were not affected. The final group were the inhabitants of the Boucle du Mouhoun region, which covers six provinces and is the region where the project was implemented. Unlike the PAP, who had a right to a plot of land in the new area, the other beneficiaries could request a plot. It should be noted that local populations were involved in and given responsibilities throughout the project’s implementation. Village representatives have had a say in all the decisions which could affect the populations’ interests.

A different vision of support for rural populations

The PDA has a set-up based on an innovative vision of supporting population groups via agricultural measures in Burkina Faso. Firstly, it has complied with the legislative provisions and national and international policies regarding the use of agricultural land, specifically the World Bank’s Operational Policy 4.12 on involuntary resettlement, Burkina Faso’s strategy for accelerated growth and sustainable development, environmental regulations, regulations on investment, etc. In this way, the groups affected by the project have, on the one hand, benefited from financial compensation for loss of harvests on the area covered by the project. This compensation took into account the area lost by the household, the resulting speculation and the time the project took to develop and redistribute the land. On the other hand, they received compensation in the form of land for land (a natural plot taken, a cultivated plot returned) at the end of the work.

Secondly, and for the first time in this type of project in Burkina Faso, the PDA established an office dedicated to support, follow up and inform persons affected by the project. A consultant was recruited and assigned to Di (in the project area) as the representative of the project and its actors vis à vis the affected groups. He participates in all the project activities and has access to all the actors involved in the project. This approach made it easier to gather and process complaints by the beneficiaries. It gave the target group a permanent point-of-contact for their concerns and allowed them to be quickly resolved. The consultant’s function in promoting social cohesion was one of the keys to the project’s success, as he succeeded in containing and resolving various conflicts, with the aid of the project.

The third benefit obtained through this type of project support was the valorisation and development of the farmland. The project provided target groups with several training courses on various issues of agricultural production, conservation and product marketing. Subsequently, their complete needs for ploughing, fertiliser and seeds were covered for two farming seasons (one dry, one wet). This solution allowed each producer to set up a revolving fund based on the profits gained from the two previous farming seasons, which largely freed them from the need to take out bank loans to develop their plots. Finally, the PDA built three modern markets in the three villages in the Boucle du Mouhoun region where the farming produce could be marketed.

One example of secure land tenure in Burkina Faso

The PDA has developed 2,240 hectares, and all of this land has been returned entirely to small farmers; none of it went to agro-investors. The land was primarily allotted to the PAP, with 1,445 individuals, and subsequently groups of women and young people. In a third stage, land was allotted to households in the three riparian villages in the project zone (464 households), and finally it was opened to residents in the Boucle du Mouhoun region (500 households). The transfer of lands to farmers was accompanied by a secure land tenure policy adapted to ensure lasting protection of small family farmers. These rights accordingly provide differentiated types of protection. Every PAP obtained a land title without charge, and each non-PAP beneficiary household was delivered with a 50-year lease.

Before transferring the developed land to farmers, it was registered in the name of the state, then divided into plots, and marked out. This process is necessary to ensure that, by paying compensation to owners and farmers previously settled in the project zone, all the traditional rights in the land are discharged and to establish a Declaration d’utilité publique proclaiming that this is of public interest and in accordance with Law 034-2009 on the rural land regime in Burkina Faso and World Bank Operational Policy 4.12. Before project implementation, the developed land was not covered by any land title, and the landowners did not hold any documented legal right to land they had inherited from their parents or received as a gift.

A study commissioned by Welthungerhilfe in February 2016 compared the PDA with another agricultural development project in Burkina Faso operating with a different methodology and goals (Bagrépole) and showed that the agricultural development project PDA had a positive impact on the life of the target groups in the project region. Agricultural production increased, e.g. production of maize rose from less than two tons a hectare to almost four tons. The substantial production of tomatoes, onions and other vegetables in dry seasons generated income for households and is raising food and nutritional security. The project generates activities for young people and combats their exodus to Côte d’Ivoire or Mali. And it contributes to raising school enrolment rates of children from the affected households, and is also resulting in more frequent visits to health centres.

The three modern markets set up by the project in the region have made commerce a keynote activity. There is, however, still serious concern about the quality of the roads needed to open up a region which is so rich for the country.

The agricultural development project PDA is a first for Burkina in both its concept and its implementation. Support to target groups has been well-judged, and their rights have been sustainably protected by a secure land-tenure regime adapted to their needs. However, this type of project should also include a component to better integrate and open up the region, enabling products to be more conveniently transported to local, national and international markets.