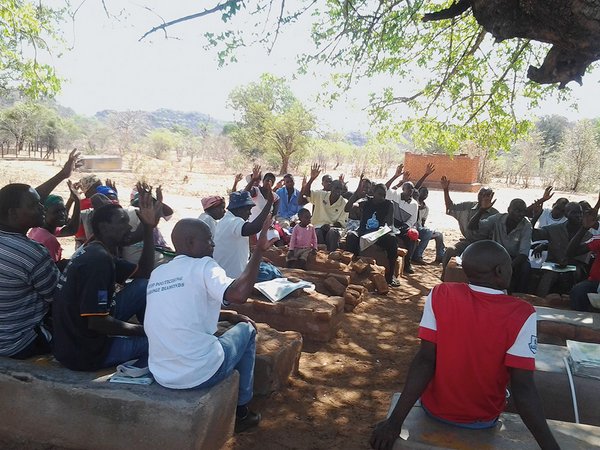 Marked power imbalances often result in communities losing out in use conflicts over their territories and resources. This applies in particular to extractive industries and infrastructure projects. Community protocols can help bring the negotiating parties together at eye level and create a balance of interests.

Community protocols are above all a legal empowerment tool. They aim to secure a seat at the table for marginalised voices in decisions that may impact their lives, the territories on which they live and the resources on which they depend. Community protocols were applied for the first time in the context of the United Nations Convention on Biological Diversity (CBD) – in order to reach stronger benefit-sharing arrangements between communities and business or research entities. But they may be developed for a wide range of issues and interests. For example, in India, a pastoral community drew up a protocol to claim recognition over their traditional knowledge of buffalo and camel breeding; whereas in South Africa, traditional healers from different ethnic backgrounds came together to seek access to plants that they had been denied access to by a protected area. Community protocols are also increasingly playing a role in resource extraction and infrastructure planning, e.g. in Zimbabwe, where a community is using the process to address the social and environmental impacts of mining.

In what way are community protocols useful?

The history of companies and governments engaging with communities, especially in the context of extractive industries, is full of conflict. Generally, marked power imbalances become barriers to meaningful engagement between the community and external parties. Protocols can help to provide communities with access to information about the project and ensure that an internal position is formed, based on which negotiations take place. Also, communities often lay down their governance structure and customary rules, but also procedures that regulate internal conduct as well as interactions between themselves and outsiders in the protocols. Such information can help prevent conflicts down the line. In Zimbabwe, for example, the community used the process of a community protocol to engage with three mining companies, as a result of which it designated certain “no-go” areas like graveyards of its Chiefs. In other cases, even knowing who legitimately represents the community is already a great asset.

The development of community protocols can also make communities better informed about their rights and thus be in a better position to understand and use the law more effectively. ‘Access to Justice’ is one of the Sustainable Development Goals (SDGs) adopted by the United Nations, but here, local communities face several barriers, including poorly accessible redress mechanisms, corruption, difficult procedural systems and laws unfavourable to the rights of communities. Legal empowerment of the community is therefore important in ensuring that communities are able to understand and articulate their rights within relevant national and international legal frameworks.

The community protocol process also creates a platform for reflection and collective action within the community. It provides a space for community members to jointly discuss the frequently new challenges they are facing and come to an internal position for their engagement with external parties. Through appropriate procedures, this will lead to the inclusion of marginalised groups within the community while creating a space for empowerment and self-mobilisation. In Zimbabwe, for instance, the community consultations that were part of the protocol process contributed to the formation of two unions – the Mining Communities Coalition and the Zimbabwe Diamond and Allied Workers Union.

The remote salt desert in Northern Argentina, Bolivia and Chile is called the “lithium-triangle”, holding between 60 and 80 per cent of the world’s lithium reserves. The ‘community’ that developed the protocol in fact consisted of 33 smaller communities with roughly 6,500 people in all. They share the same language, ethnicity, and similar livelihoods involving the traditional extraction of salt from the salt plains, cloth spinning and small-scale agriculture and livestock-keeping. Each of them has an elected representative, although most decisions are made collectively by the community. The concept of community protocols was introduced to the community by the NGO Fundación Ambiente y Recursos Naturales (FARN), which had been working with the community for many years. At that point in time, the communities were demanding their right to free, prior and informed consent (FPIC) in the context of lithium mining that was to be started in their territory, possibly undermining traditional salt extraction. The process began in March 2014. In December 2015, the communities finalised and made public their protocol called “Kachi Yupi” (tracks in the salt). The document describes the communities’ identity, history and rights, and also lays down the process of FPIC that must be followed by any project affecting their territory. What gave the protocol additional strength was its formal recognition by the National Ombudsman in Argentina, who passed a resolution requiring that the FPIC process be recognised and respected. The protocol has already served as a platform for additional consultation processes, including one with the Tourism Department for the ‘Dakar Rally’ that as of recently passes through the territory.

Lamu County in the northern coastline of Kenya has been chosen as the site for the development of a mega-port as part of a 23-billion-US-dollar multi-sector infrastructure project – the Lamu Port South Sudan Ethiopia Transport Corridor (LAPPSET). All groups affected by the port were included in the protocol’s development, including various communities who differ not only in their ethnic identities but also in their livelihoods, which range from fishing, pastoralism and forest dependency to trade and farming. And they hold different opinions on the port project, with some welcoming potential employment opportunities and infrastructure and others decrying it for the negative impacts on the communities’ existing livelihoods and environment. The protocol process began in 2010, members of the affected communities having approached civil society working in the region for assistance in gaining information about the project and involvement in the decision-making process. These community members then mobilised themselves under the banner of ‘Save Lamu’, which was registered as a community based organisation in 2011. 72 meetings were held across 46 villages. While the protocol initially focused on the port, impacts from a coal power plant planned in the region are also now included. The protocol was drafted by community members and strengthened by resource mapping, participatory video and legal empowerment projects. It sets out the community’s desires and concerns in relation to the port and the coal power plant. It is being used to support a legal petition in the High Court of Kenya to seek information and consultation in the project.

Protocols are highly context-specific, making a thorough grasp of local context and dynamics crucial. They are designed to be a process and outcome that builds consensus and dialogue. Natural Justice advocates and supports an inclusive process that provides space for marginalised groups like women, sub-tribes, elders, youth and disabled. Creating this space can often mean breaking internal community dynamics, and the facilitators must find ways to make the process inclusive without being disruptive to community cohesion. In Zimbabwe, separate meetings were held with women to ensure their views were taken into account.
Community protocols can be a powerful tool for community empowerment and meaningful community engagement. They have considerable potential in creating spaces for indigenous and local communities to exercise greater control over policy and decision-making processes affecting their life. However, they are not meant to be a stand-alone tool and must go hand-in-hand with other methodologies and tools for community empowerment. For instance, legal empowerment of communities is an important part of the engagement with communities seeking to develop a community protocol. The ability of a community protocol, process and outcome to be moulded to the specific requirements of the context is perhaps its greatest strength.

Natural Justice has been working with community protocols since 2007 in a number of different contexts and regions. In 2013, in collaboration with the Heinrich Böll Foundation, the organisation designed a project to examine the particular usefulness of community protocols in the context of extractive industries, with pilot case studies in Argentina, Kenya, Zimbabwe and India, including those mentioned in this article. For further information on these see here. 