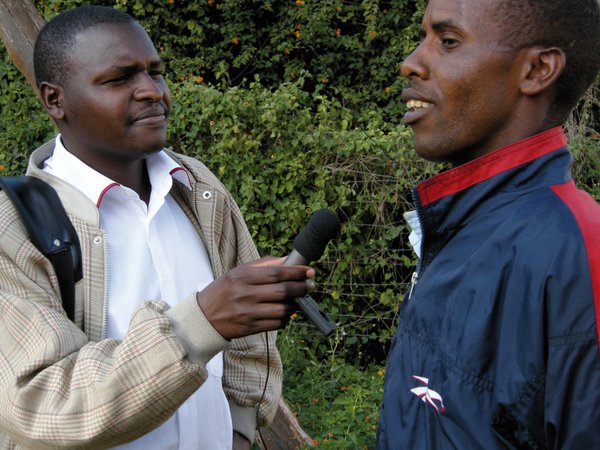 Radio interviews where farmers report on their experiences are an integral part of the Farmer Communication Programme.
Photo: Biovision

In many parts of Africa, formal education and training in agriculture is almost nonexistent. Swiss Biovision Foundation supports farmers via its Farmer Communication Programme. While it takes advantage of its close links with research institutions, the ideas and experiences of farmers also flow directly into its course contents.

As recommended by the International Assessment of Agricultural Knowledge, Science, and Technology for Development (IAASTD, 2008) and confirmed by the World Development Report 2008, hunger and poverty can most efficiently be addressed with support for the sustainable ecological agricultural sector and a focus on smallholder farming with locally adapted cultivation methods. Sustainable agriculture is less input intensive and therefore more accessible for resource-limited rural people, which means that it has a high potential for improving the livelihoods of a large group of rural poor and particularly women.

During his 27 years in Africa, Biovision President Hans Herren grew increasingly aware of the lack of connection between research institutions and those practising in the field. He realised that bridges needed to be built, which was one of the reasons he founded Biovision Foundation in 1998.

At first, Biovision supported exchange between icipe, the Nairobi-based international institute for insect science for food and health, and farmers in Kenya. The exchange soon proved useful for the scientists as well, as they benefitted from the experience on the ground to fine-tune their research.

The significance of organic farming methods in Africa differs from that in Europe: Many African farmers are unable to afford conventional farming methods using pesticides and fertilisers, so that organic farming is an essential alternative. It is vital that these impoverished farming families are given help and advice on how to increase yields without major investment. Furthermore, they are faced with the serious consequences of climate change, they are also anxious to get information on drought resistant varieties of crops they grow and other advice on means to face the challenges of global warming. Farmers have an enormous thirst for knowledge as formal education and training in agriculture is almost non-existent in many parts of Africa.

One notable project was the introduction of the Push-Pull method. This is an integrated, sustainable method of farming that improves maize yields and soil fertility: The stemborer pest is repelled by the smell of desmodium, a legume planted as an intercrop between the maize (“Push”). Napier grass is grown as a border crop and it attracts the stemborers away from the maize field (“Pull”). Desmodium can also fix nitrogen and neutralise the striga weed as well as keeping the soil moist for longer. This can increase yields without the use of artificial fertilisers and pesticides. The napier grass is a welcome source of healthy animal fodder, too.

With courses on the field, thousands of farmers were thus provided with a method that allowed them to improve their yields manifold and also supported them in maintaining their livestock. Today, some 80,000 farmers in East Africa are using the method.

While direct contact with the smallholders proved very successful in a number of such projects, it eventually became clear that additional means were required to reach more of the millions of farmers keen on improving their livelihoods with better farming methods.

In 2005 we launched the magazine “The Organic Farmer” (TOF) for smallholders in Kenya, who previously had limited access to information on organic farming methods. TOF is published monthly in English and Swahili, and today it is distributed to 28,000 farming groups, amounting to a readership of 248,000 farmers in Kenya, Tanzania, Uganda, Burundi and Rwanda. A locally adapted edition for Ethiopian farmers is about to be launched. In addition, TOF is delivered to 266 schools and other non-agrarian institutions, so that the knowledge is not just being anchored in the minds of future generations of farmers, but the students also go home and share their freshly acquired knowledge with their parents.
Since it was first published in 2005, the print-run of TOF has continued to rise in order to cater for the increasing demand. Its close proximity to icipe means that the editorial team has access to scientific resources. This allows the magazine to focus in depth on current problems (e.g. drought in 2011). Farmer groups remain the main target audience for TOF. Regular meetings are held to discuss the content of articles and share experience. The farmers provide the editorial team with feedback and much of the content is determined by this feedback – a process that has helped to increase the farmers’ self-esteem.

TOF is the only magazine for organic farming in East Africa and remains a central element of the Farmer Communication Programme (FCP) set up to disseminate knowledge throughout rural East Africa. In addition to the information published in TOF, information is also disseminated on the radio, by SMS and the Internet platform infonet-biovision.org.
The farmers’ regular feedback is used to ensure that TOF, and FCP as a whole, constantly meets their needs. For example, the layout was updated in 2013, and the magazine now includes a “market” column where TOF readers can advertise and sell agricultural products. This facility is much appreciated by farmers and used enthusiastically. A radio column also takes up questions raised by farmers who call into radio programmes, thus ensuring that contents are relevant to the target group.

A mixture of communication channels

TOF-Radio plays an important role in FCP, too. It is a seven-minute radio programme on organic farming methods that runs twice a week. It deals with the issues facing farmers, discusses the latest research findings and allows local farmers to share their experiences with others. Programmes are broadcast in Swahili, one of Kenya’s official languages. They feature regular interviews with farmers who describe their use of the methods advocated by TOF. Farmers profiled in the programme are interviewed locally on their farm or invited to the studio in Nairobi.

Special programmes that run for an hour are also regularly broadcast. The programmes allow the TOF Radio team to reach up to four million listeners a week. The TOF Radio programmes are an ideal complement to TOF magazine and also reach those in Kenya – about 25 per cent – who cannot read. All radio programmes can be downloaded free of charge from the Biovision Infonet.

A further challenge is the fact that there are still plenty of regions where Swahili is not understood by the population. So FCP has just started to co-operate with local radio stations broadcasting in different languages. Eighteen programmes have been produced for each of the two languages Kikamba and in Kalenjin and they will be broadcast in the first half of 2014.

Similarly, social media such as the TOF website and TOF Facebook pages are increasingly important communication platforms. They allow users to obtain advice and share ideas on successful cultivation methods, livestock trials and obtain favourable access to products. The use of social media is targeted particularly at the younger generation.

From research to trainer to farmer to research …

A special advisory service for farmers living in remote areas was created with the Outreach Programme which ensures direct and personal contact with the beneficiaries of the Farmer Communication Programme. It runs 13 Info-Centres, staffed with trained advisors who are equipped with motorcycles so that they can reach farmer groups in remote places for training sessions in their fields. Further information centres run by other organisations are collaborating with FCP. The trainers, who have been specially prepared for their activities, are constantly in personal contact with the farmers and their mission also includes passing on farmer input to the scientists. Neither do the scientists concentrate solely on monitoring their own trial fields, but they are constantly in touch with the practitioners, also via the Outreach Programme.

The Farmer Communication Programme is a highly promising approach to improving the livelihood of the rural population in East Africa, and already, there are countless success stories to tell after less than ten years. One important aspect of this approach is that it provides the beneficiaries with knowledge that can be used again and again and can also be passed on at no extra cost, making it truly sustainable.

But so much could and should still be improved. Research needs to take place locally, as the particularities of a region’s vegetation and soil, weather conditions and consumer patterns all need to be taken into account. The dividends of this kind of research could be enormous in terms of reducing poverty and hunger across the globe, but not directly in terms of financial rewards for internationally active private companies in the food business; which is why this research needs to be publicly financed.

Finding the appropriate channels of communication is another challenge. Widespread illiteracy among rural populations in developing countries remains a big obstacle. This is why we are continuously evaluating the effectiveness of the various channels in order to optimise existing channels or building up new ones.

At the end of the day it is the governments that need to take on the responsibility for creating the knowledge and then getting it to the target group. But as long as governments continue to neglect smallholders in their list of priorities for lack of immediate high returns, which is an attitude particularly prevalent in the developing world, the outlook remains difficult. This is why Biovision Foundation has become involved in the political process as well to ensure a paradigm shift in agricultural policy across the globe (see Box). A future for all – naturally!

Seventy per cent of all food produced world-wide comes from smallholders who cultivate 40 per cent of arable land. But particularly in the Global South these smallholders are faced with many challenges, starting with their limited knowledge about farming in general and exacerbated by natural causes such as climate change, or political and economic factors such as lack of market access, insecure land rights and unfair competition through subsidised products from the developed world. So there is an urgent need to strengthen these smallholders by ensuring that they can sustainably increase their yields and their income without costly external input.

One area of support is on a political level. With the final declaration of the 2012 Rio+20 conference calling for the Committee on World Food Security (CFS) to assist nations who want to develop a sustainable agriculture and food sector, there is hope that this approach will find its way into national policies. Biovision Foundation is providing input into this process with a project called “Changing Course in Global Agriculture”. This project offers integrated and dynamic planning tools to inform effective, comprehensive and long-term policies geared towards fostering the implementation of sustainable agriculture in the three pilot countries in particular and Africa in general. The project will develop dynamic computer-based models, using a multi-stakeholder approach, as a means for the Governments of Kenya, Ethiopia and Senegal to review, develop and adopt appropriate agriculture and related sector policies.