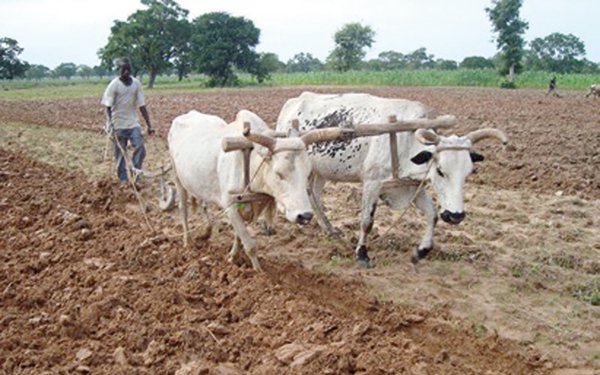 The animal traction system can be grouped into five components: the animals, the harness, the implement (plough, harrows, ridges, and carts), the operator and the soil or load.
Photo: Houssou et al.

Although animal traction would be well-suited to cover parts of farm power demand in sub-Saharan Africa, the use of draft animals has been limited in the region. The authors demonstrate why this is the case in Ghana.

Agricultural development is invariably associated with adequate farm power supply. Many countries in sub-Saharan Africa (SSA) have experienced an increase in food demand in response to population growth, rural-urban migration and urbanisation. As result, there is a growing energy need in the agricultural sector in the sub-region. In 2003, according to the United Nations Food and Agriculture Organization (FAO), only 35 per cent of farm power came from non-human power sources, indicating that there is a big potential for the use of mechanical farm power in the sub-region.

In response, agricultural mechanisation has re-emerged recently in many countries in SSA. Many African governments have made considerable efforts to meet the energy needs of the agricultural sector. In Ghana, for example, these efforts have largely focused on the provision of subsidised tractors to the farming population (see Houssou et al., 2013, p.1 and article "Sustainable mechanisation – a hard row to hoe"). Animal traction has remained in the background. Meanwhile, the strong demand for mechanisation services and the inadequate number of tractors to meet the demand call for making more effective use of and harnessing other sources of agricultural power to meet the country’s growing food needs.

Animal traction technology is a significant component of agricultural mechanisation. Draft animals are a major source of farm power in the drier rainfed farms of sub-Saharan Africa, especially among small-scale farmers. Some surveys suggest that the technology is still relevant for farming communities in parts of Ghana. Given rising labour shortages in most farming communities, the limited supply of tractor services and regional differences in soil characteristics, working animals are particularly appropriate for farming in parts of Northern Ghana. This note documents the potential of and constraints to animal traction development in the country. The note is a synthesis of research by Houssou et al. (2013) and findings from a survey conducted by the International Food Policy Research Institute in collaboration with Savannah Agricultural Research Institute in 2013 (IFPRI/SARI, 2013). The findings and conclusions in this paper can be extended to other SSA countries where draft animals are used as a source of farm power.

Who uses animal traction, and for what purpose?

With regard to farming activities, just like a tractor, draft animals are used to plough, ridge and/or harrow. The technology is also used for carting agricultural produces, water, charcoal and firewood, and for transporting school pupils and farming families. Owners primarily use the animals on their own farms, but they also provide services to neighbours on a hiring basis for cash or in kind. Like tractor users, draft animal users cultivate a variety of crops, such as maize, rice, millet, sorghum, groundnut, cowpea and soybean, among others. They use similar levels of inputs and they obtain comparable yields. Most importantly, the IFPRI/SARI survey also reveals that a substantial number of medium-scale farmers with more than two hectares of cultivated lands rely on draft animals for their power needs.

Is animal traction a profitable technology?

Compared with tractors, draft animals and their implements represent a smaller and more affordable investment. For example, in 2012, a pair of work oxen along with the relevant implements (moldboard plough, ploughshare and yoke) cost about 1,800 Ghana cedis (GHȼ), versus GHȼ 17,000 for a used tractor and a plough. Furthermore, ploughing with draft animals is cheaper than ploughing with a tractor (GHȼ 69 versus GHȼ 86 per hectare ploughed). Hence, draft animal users are better off simply using draft power on their small farms when considering the costs associated with the use of the technology for cropland preparation. Nonetheless, the low adoption of animal traction raises the question whether it is a profitable technology at farm level. A previous study by Panin (1989) suggests that animal traction investment is profitable in North-eastern Ghana. Findings from the IFPRI/SARI survey also seem to concur, with 80–87 per cent of draft animal users making profits out of their farming activities. Furthermore, used as a service, animal traction is profitable for owners who combine their own use with services, with 71 per cent (17 of 24) of interviewed providers making profits. These results suggest an economic justification for the use of draft animals in the relevant regions.

What are the challenges faced by users?

The adoption of the technology has been disappointing in most parts of SSA. One of the biggest constraints to the use of animal traction was perhaps the sudden emphasis on tractorisation after post-independence and the wish to bypass animal traction in the sub-region (Pingali et al., 1987). However, pests and diseases, among other factors, have also limited the widespread use of the technology in this part of the world.

In Ghana, the more general adoption of animal traction is essentially hampered by design and socio-economic issues. Among the design issues, most of the ploughs and ridgers used in the country are copies of imported European ‘Eberhardt’ implements, which were developed to suit the larger animals found in temperate regions. Eberhardt design raises the hitching points between the animal harness and the implement too high for the small animals used in Ghana, pushing the centre of resistance far behind the implements. This stresses the animals, imposes undue pressure on the operator and causes early fatigue.

The current withers yokes and the traditional collar harness are uncomfortable for the animals. The yokes’ points of contacts are so small that the pressure developed causes harness sores and restricts the animals during work. Furthermore, farmers complained about the fast wearing nature of their ploughshares. Local shares forged by blacksmiths wear very fast because of low hardness values in the metal used. The improved cast steel share, which was developed by local researchers, is not known among animal traction users. Locally forged blacksmith tillage tools are made from scrap metals that are not properly heat-treated and, so, wear very rapidly.

The prevalence of diseases is also a major constraint to animal traction development in Ghana. The breeds of oxen used include the small West African shorthorn, Sanga, and N’dama. These breeds are tolerant of trypanosomiasis, but are not resistant. In areas infested with tsetse flies, the vector for the disease, the work oxen become highly unproductive because of abortions, infertility, slow growth and long calving intervals. But most local farmers and Fulani pastoralists are able to identify the symptoms of trypanosomiasis and, generally, have native knowledge in treating some of the animals’ ailments.

With regard to socio-economic issues, there is shortage of labour or young boys who used to operate draft animals due to increasing school enrolment of the youth. Likewise, regions where animal traction predominates are located in the drier part of Ghana. Feed and water availability during the dry season is challenging in these regions. Finally, theft is a key obstacle to animal traction development in the country.

What could be done to support animal traction development?