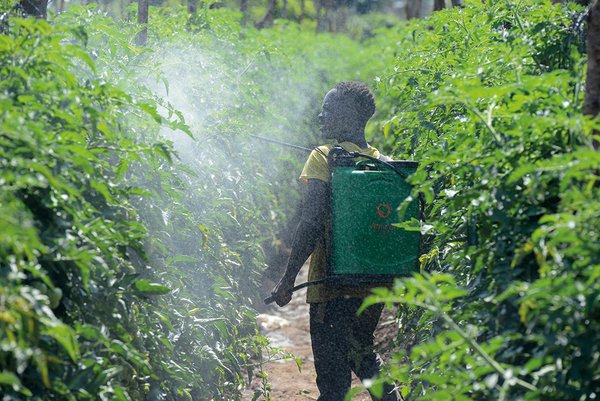 In low- and middle-income countries, legislation on pesticide use tends to be feeble.
Photo: Jörg Böthling

We still remain too much in the academic area

At the 6th World One Health Congress, scientists and representatives of governmental and non-governmental organisations gave accounts of their activities at the animal-human-environment interface. Alongside the “usual suspects”, topics were on the agenda that showed just how comprehensive and universally applicable the One Health approach is.

This year’s World One Health Congress, co-organised by the One Health Platform, the University of Edinburgh/Scotland and the SACIDS (Southern African Centre for Infectious Disease Surveillance) Foundation for One Health, was held under the motto ‘Advancing science to improve health and security’. The exclusively virtual event was devoted to five major thematic blocks: One Health science, antimicrobial resistance, the science policy interface, SARS-CoV-2 and, as a cross-cutting topic, global health security. The variety of topics was reflected in roughly 250 lectures. The following is a small selection of them.

What about antimicrobial resistance in LMICs?

Antimicrobial resistance (AMR) is among the top health concerns world-wide. However, in low- and middle-income countries (LMICs), trends in antimicrobial resistance are poorly documented, and surveillance networks are still in their infancy. Thomas P. Van Boeckel of the Swiss Federal Institute for Technology (ETH) in Zürich, Switzerland, presented a research project in which twelve thousand resistance rates had been extracted from point prevalence surveys (point prevalence refers to the number of diseased individuals at a certain point in time) in LMICs on common foodborne pathogens. For this purpose, data on antimicrobial resistance for Escherichia coli, non-Typhoidal Salmonella, Campylobacter spp. and Staphylococcus aureus was used. Resistance rates were curated across all the studies in a public database (resistancebank.org). For each study, the proportion of drugs tested with resistance levels higher than 50 per cent were calculated. Based on this, Van Boeckel and his colleagues then compiled maps at 10 km resolution with the aid of geospatial modelling.

An evaluation of the data revealed that from 2000 to 2018, the proportion of antimicrobials with resistance higher than 50 per cent increased twofold in chickens, and threefold in pigs in the countries surveyed. Considerable geographical discrepancies became apparent. While China, Northeast and South India represent the largest hotspots of resistance, new hotspots are emerging in Central India, Brazil, and Kenya. “Our maps suggest that world-wide, a substantial proportion of chicken, cattle and pigs are raised in hotspots of antimicrobial resistance,” said Van Boeckel, summarising the results of the survey. The global maps are to provide a baseline to outline priorities for interventions in low- and middle-income countries and monitor their efficacy in the future.

Linda Waldman of the Institute of Development Studies at the University of Sussex, United Kingdom, pointed to the need for gendered approaches to antimicrobial resistance. Waldman presented findings from a case study piloting the Community Dialogue Approach (CDA) for addressing AMR in Comilla district, Bangladesh. Fifty-five community-based volunteers from five community clinics were trained in antibiotic usage, communication and facilitation skills. Subsequently, these volunteers hosted 400 meetings during which community members explored specific health issues affecting communities, identified solutions and decided how communities might address these issues. Not only did the necessity of training female and male facilitators to conduct community dialogues with female and male groups respectively become apparent in the course of the study. Differences in handling antibiotics were also revealed. Women typically attend local community clinics where health care practitioners have been trained on the appropriate use of antibiotics. The latter pass on this knowledge to the women, who are responsible for family health. In contrast, men typically purchase antibiotics from pharmacies without prescription and administer drugs to livestock. “Attention must focus on how men and women, and the power relations between them, inform livestock production, health and livelihoods in ways that have significant ramifications for AMR,” Waldman concluded.

“Snakebite envenoming is a neglected tropical disease with a substantial public health impact. Poor rural communities are particularly affected,” explained Sara Babo Martins of the Faculty of Medicine at the University of Geneva, Switzerland, introducing her research. The world-wide number of envenomed people yearly is put at 1.8-2.7 million, while, 81,000 to 138,000 victims die yearly and 400,000 are permanently disabled. What is less known is that various types of domestic animals are affected by venomous snakes, with high case fatality rates in livestock. “This double socio-economic impact has not been yet assessed and can only be captured by using a One Health lens,” the scientist said. For this purpose, in the framework of a nation-wide multi-cluster random survey, she interviewed 11,700 households in Cameroon and just below 13,800 households in Nepal regarding the impacts of dry bites. The questionnaires established data jointly on human health (such as death, stress, wound-care, amputation, blindness, impairments of legs, feet, arms and hands, serum sickness) and animal health (mortality/morbidity) as well as on out-of-pocket expenditure in healthcare and animal healthcare and on productivity losses.

In both countries, high annual incidence and mortality rates in humans were reported. The conspicuously high mortality rate among 5-14-year-olds – it was 16 times higher than expected – and the extensive impacts on rural livelihoods surprised the scientist. In Nepal, for example, 28 per cent of respondents stated that they had to stop working owing to snakebite; 40 per cent said that a household member had had to stop working. In order to estimate the health burden and economic impact in the two countries, disability-adjusted life-years (DALYs) and cost-of-illness assessments were performed (DALYs measure the disease burden by referring to the number of years of ill-health, disability or early death). Regarding Nepal, the studies recorded 2.7 million US dollars in livelihood losses per year and 241.102 DALY/year.

Although human and animal health were directly or indirectly dependent on plant health, the latter was typically not integrated in the discussion of one health, criticised David Rizzo of the College of Agricultural and Environmental Science at the University of California, Davis, USA. He reminded the meeting that foodborne illnesses pose a serious global burden on human health, affecting 600 million people or 33 million Disability Adjusted Life Years in a single year. In the context of One Health, plant health impacted on four areas: food security, food safety, economics and ecosystem health.

One example is bananas, which represent an important staple crop for millions of people in low-income countries, providing them with carbohydrates, vitamins and protein. In addition, they help prevent soil erosion, offer other crops shade, supply animal feed and serve as a raw material in manufacturing utensils such as baskets, carpets, shoes and many more. In East Uganda, there was a severe outbreak of banana wilt in 2001 which had been caused by the bacterial pathogen Xanthomonas campestris pv. musacearum. Infestation destroyed at least a quarter of the harvest, almost doubling the price of the crop. As a result, household eating habits changed owing to fewer meals, smaller meals and substitutes, with negative impacts on nutrition and health.

Rizzo demonstrated the link between plant health, food safety and public health by referring to lessons learnt through the outbreak of aflatoxicosis in Kenya. One of the effects that ingestion of aflatoxines caused by the fungus Aspergillus flavus via crops and stored grains leads to is acute liver and kidney disease, as a case study from Kenya carried out in 2004/2005 shows. A total of 125 people died of aflatoxicosis triggered by eating home-grown maize. Chronic exposure may lead to liver cancer and immune suppression and is a threat to humans and animals. Five billion people in low- and middle-income countries were at risk of chronic exposure to aflatoxins. “It’s time to face the fungal threat,” the scientist warned, adding however that the countries affected often lacked the necessary infrastructure.

And last but not least, high levels of pesticide use in plant-based agriculture impact negatively on public health. Chronic exposure owing to the application of agents or their residues in plants or drinking water may lead to depression and neurodegenerative disease in adults and neuro-developmental toxicity in children. Whereas the use of pesticides in high-income countries is strictly regulated, legislation in LMICs often tends to be feeble. Training of farmers in the safe handling of plant protection agents and integrated pest management ought to be part of a One Health approach covering the entire complex value chain – from cultivation through harvest, food processing and distribution to food access.

Do not neglect the social dimension

New insights into the epidemiology of both neglected tropical diseases and newly emerging infections, successes achieved in vaccine development and new strategies in diagnostics and detection, and the prospects offered by big data and artificial intelligence for surveillance, early warning systems and intervention strategies – despite the enormous significance of “technical advancements” which One Health research can boast, what really counts in putting the One Health approach on a broader base again and again became apparent in the discussions during the five-day event: political will and financial backing. Above all, the social dimension of One Health had to remain in focus, said Jakob Zinsstag of the Swiss Tropical and Public Health Institute (Swiss TPH) in Basel. And this required engaging with the social, economic and value systems that drive health processes. One Health meant far more than the absence of disease. It had to be understood as a complex set of relationships, trade-offs and compromises. This had once again been highlighted by the impacts of the current corona pandemic on people’s livelihoods. A participatory, trans-disciplinary and cooperative approach was key. “Although we scientists believe that we have the knowledge and we can explain the situation, we must engage with communities and authorities when it comes to finding the much needed locally adapted solutions. This can often not be decided at an academic desk,” Zinsstag maintained. In other words, it is time to reach beyond the academic area.