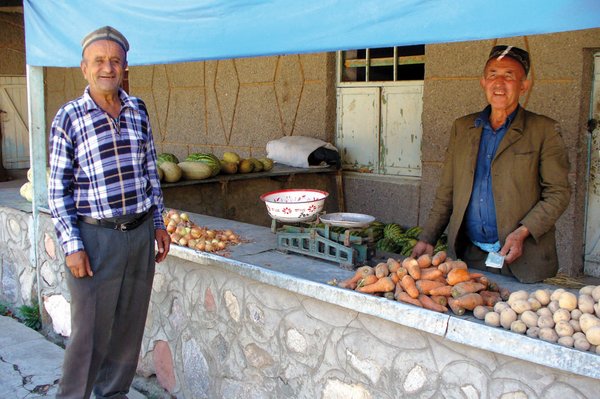 Even though it could be assumed that producers benefit from higher prices, the contrary is true for smallholders who suffer from little market integration and who are in fact net-buyers of food.
Photo: S. Koop, Welthungerhilfe

What about small farmers? – The example of Tajikistan

In response to structural food insecurity in Tajikistan, in May and June 2011 Welthungerhilfe and the local Advisory Information Network surveyed 300 households in that country’s major wheat growing area. The aim was to find out how small-scale producers are coping with the rising prices.

Not long after food prices around the world surged to new historic peaks in February 2011, prices also began to skyrocket in Tajikistan. In July 2011 they were the highest recorded since price monitoring began in the late 1990s.

Tajikistan’s markets were also hit hard by the first global food price crisis in 2007–08. However, unlike international markets, the prices did not drop again between 2008 and 2010,

but remained at a high level (see Figure). The rise in prices impacts on all types of food, including wheat and wheat flour, the main staple food in Tajikistan. Bread is eaten at all meals and accounts for approximately 60 percent of the daily caloric intake of the region’s population.

Dependency on a few trading partners

The main reason that the markets in Tajikistan are so vulnerable to global market prices is on the one hand their dependency on world food markets (the country imports about 60 percent of its food needs). On the other hand, Tajikistan is not well diversified in terms of trading partners: almost all its wheat – the staple food – comes from Kazakhstan and must be transported overland through neighbouring Uzbekistan. Relations to Uzbekistan, at one time a major trading partner, have become increasingly tense in recent years. In early 2011 Uzbekistan raised its tariffs on the transit of Tajik goods by up to 74 percent. Tajikistan is also forced to import its fuel from elsewhere – almost all from Russia. When Russia forced up its already increased prices even further by introducing an export tariff, the cost of fuel in Tajikistan spiked dramatically. The infrastructure in this mountainous country is so poor that high prices for petrol and diesel have a disproportionate impact on transport costs and thus food prices.

Small-scale wheat growers reported that price fluctuations are common and tend to follow seasonal patterns. They are usually low at harvest time, but steadily rise during the following months as stocks become depleted. Everybody is used to the small price spikes which typically occur at times of special festivals such as Ramadan. Three quarters of the farmers surveyed, however, said that they have never before experienced such increases as those in the spring of 2011.

It could be assumed that rising food prices are of benefit to small-scale producers, who can sell their produce at better prices. In Tajikistan, however, few smallholders are actually involved in the market: most of their crops are for their own use. For their other needs they depend heavily on other sources of income such as overseas remittances (Tajikistan has the world’s highest rate of migration), social transfers, irregular work or any combination of these. Lacking transportation options, long distances and inadequate infrastructure mean that the farmers who do have excess wheat for sale have only limited access to markets. Potential purchasers are few, leaving farmers little chance to negotiate better prices. Although they are usually well-informed about market prices, half the surveyed farmers indicated that the selling prices they can achieve are not profitable. A third stated they have no room at all for price negotiation.

Half the farmers said that they have storage facilities available for winter stocks. However, very little of their production is retained for later sale when prices are high. Almost all is sold soon after harvesting, mainly to pay off debt and purchase the other provisions they need but do not produce themselves (such as sugar and oil). In May and June 2011, when the interviews were conducted, none of the farmers had any surplus to sell at the record prices prevailing at the time.

At the same time as food prices escalated, so too did those for fertilisers, seeds and fuel. The outcome is that small-scale farmers now have to invest more before they can grow any crops at all. Profit margins do not increase, therefore – despite the rising consumer prices.

Most of the farmers (83 percent) believed that commodity prices would stay high or rise even further, but only 3.3 percent saw the situation as an opportunity. Only a small minority is in a position to balance out the high prices of other foodstuffs and external agricultural inputs by selling its wheat at record prices.

The serious implications of increased prices, particularly in rural areas

In reality many of the farmers interviewed must purchase more food than they can produce themselves. They experience food shortages even in times of “normal” seasonal price fluctuations. For many the lean months begin in February and March when their reserves are depleted, and end with the arrival of the new harvest at the end of June (see figure below).

The latest food price hikes in the spring and summer of 2011 occurred during the lean season between two harvests in rural Tajikistan. For this reason the impact on poor rural households was particularly hard. More than half the respondents admitted that they had depleted all their food reserves, nearly all households (94 percent) had spent their cash incomes, and over half were already in debt. This situation forced them to purchase the food they needed at record high prices. “Escalating food prices” were identified as second only to “lack of money” as the most significant cause of the current food insecurity at household level.

To compensate for their economic losses and to deal with worsening food insecurity, households are resorting to a variety of coping strategies (see figure on page 33).

Many small-scale farmers reported that they are buying more food on credit and that their debts are steadily increasing. Others said that they eat less and buy food of lower quality. Nearly half the respondents said that they and their families had eaten no meat over the past week. A study carried out in the same regions in March 2011 revealed that more than 40 percent of children are already showing signs of acute malnourishment: a clear indication of the serious implications of high prices.

Asked for their opinions on the reason behind the inflated prices, many farmers thought that they had been triggered by increased fuel costs. Almost the same number, however, suspected that “agreements between traders and monopolies” were to blame. The rural areas of Tajikistan are supplied by mobile traders – middlemen – who purchase the farmers’ products and at the same time bring the goods they need to the villages. The weak market position of the farmers (none of those surveyed was a member of a producers’ association) enables the traders to set the prices they are willing to pay. Smallholders are doubly disadvantaged by such market structures: they receive a lower price for their crops but are forced to pay inflated prices for the goods they need. As producers, therefore, they do not necessarily benefit from record prices; but as consumers they feel the full pain – often even worse than others – of high prices. It is hardly surprising that the respondents considered increased regulation of traders to be the most effective way of stabilising prices.

The interview results suggest that the higher wheat prices offer small-scale producers in southern Tajikistan few market opportunities and scant profit potential. On the contrary, they exacerbate structural food insecurity. If we wish to enable rural households in Tajikistan to shake off poverty and hunger, we need the political will and clear social consensus to promote small-scale farming. We must support small-scale producers in their efforts to professionalise their operations, and to increase productivity in an environmentally sustainable manner. The provision of appropriate agricultural advice and dissemination of the latest farming practices in particular play a key role here. At the same time broad-based rural development processes should be initiated to develop earning potential, also outside the farming sector.

The study (in German) is ready for download at:
http://www.welthungerhilfe.de/fileadmin/media/pdf/WHI/WHI2011/Welthungerhilfe_Studie_Nahrungsmittelpreise_in_Tadschikistan.pdf