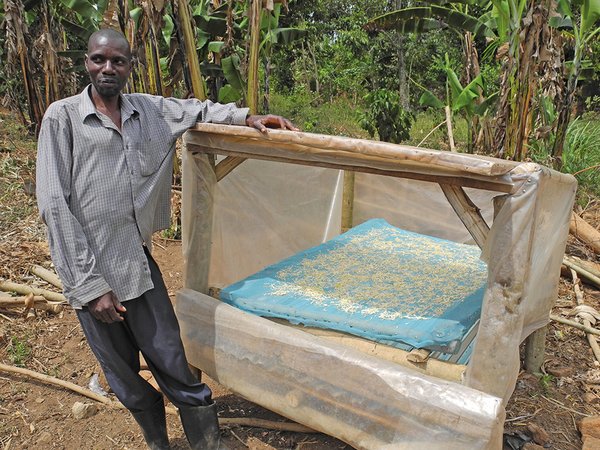 Godfrey Kaddu built his own equipment to dry fruit and vegetables – having seen it done at a fellow farmers’ group.
Photo: T. Pircher

Unleashing the potential of family farming

Converting from subsistence to market-oriented farming can increase income. Thanks to the ’Enabling Rural Innovation’ approach, family farmers in Uganda and Tanzania have succeeded in improving production and fetching better prices for their produce while safeguarding food security and sustainable management of natural resources. The recipe for success is that farmers take the development process in their own hands.

Godfrey Kaddu lives in Kigaya village in Central Uganda. He used to work as a trader in a retail shop. When his family was expanding to 13 children, he needed more income to pay for school fees and food. Since the trading business did not render enough money, he shifted to farming five years ago. However, despite working hard, his income was still limited by local marketing opportunities. After some years of farming individually, he joined the Twezimbe Farmer Group. The group learned how to conduct a market research and to develop profitable farming enterprises such as selling maize collectively to schools and bigger traders. Last year the group managed to sell maize flour to a nearby primary school for a price of 1,400 Ugandan shillings (UGX) per kg instead of selling cereals for 300–500 UGX to middlemen who buy directly from farmers. In the future the group also plans to sell beans bulked into bigger quantities to schools or other traders who can offer them attractive prices. Furthermore, Godfrey Kaddu is experimenting together with other members from his farming group on drying different vegetables and fruits which they want to bring on the market in the future. The necessary equipment was built by the farmer himself – after he had seen it at a fellow farmer group.

The Twezimbe Farmer Group works with Youth Association for Rural Development (YARD), a local NGO in Central Uganda that is one of the implementing partners in the Enabling Rural Innovation (ERI) East Africa project. The regional project is hosted by the Austrian-based NGO HORIZONT3000 and managed from its regional office in Kampala. HORI-ZONT3000 picked up ERI as a sustainable approach for a market-oriented development strategy for family farmers in two pilot projects in 2009 and started the ERI East Africa project with six local partner organisations in Uganda and Tanzania in 2013. Each partner organisation targets between 40 and 50 farmer groups during an implementation period of three years.

The ERI approach puts farmers in the driving seat – they take the development process in their own hands. In the programme farmers learn how to engage in markets and to develop an entrepreneurial culture in rural areas. Based on the principle ‘produce what they can market rather than trying to market what they produce’, farmers set up enterprises while safeguarding food security and their natural resource base. Special attention is given to gender balance for marketing as intra-household dynamics have often shown that men take over from women when a crop enters the market.

The process in farmer groups is guided by a set of methods with five core modules: Participatory Diagnosis, Participatory Market Research, Farmer Participatory Research, Participatory Monitoring and Evaluation and Enterprise Development. The methods of these modules were not completely new, but combining them was a novelty when the ERI approach was developed and introduced by the International Center for Tropical Agriculture (CIAT) in 2001. CIAT has developed the approach based on an experience in over 20 years of farmer participatory research, rural agro-enterprise development and natural resource management.

After taking up the approach and gaining initial experience, HORI-ZONT3000, in co-operation with Trias Uganda decided to consolidate its experiences in a very practical and concise manual consisting of 25 re-printable booklets and visual tools to increase effectiveness and efficiency of ERI trainings. The key players in implementing the ERI project are community development facilitators (CDFs), who are working closely with farmer groups. The CDFs were trained in-depth in all modules of ERI and in facilitation skills needed for working with the farmer groups. In six months of training, intermitted with practical field work, the CDFs were fully equipped with methodological tools for implementing the approach in their project areas.

Starting with what you have instead of what you lack

Some development agents and donor organisations portray family farmers as poor and being dependent on foreign aid. Unfortunately, this picture is even adopted by some farmers themselves, and they do not believe in being successful with small-scale agriculture on their own. The ERI approach aims to overcome the dependency syndrome by acknowledging existing resources and creating visions that farmer groups want to realise in the short, medium and long term. In the ‘Participatory Diagnosis’ module, farmers identify available natural resources, institutional networks, and specific know-how in training sessions with facilitators. Based on the identified assets, they develop a vision of how they see themselves in the future. This process helps participants to become aware of the current and the desired situation, and to set objectives that they want to achieve. Common objectives include improvements in food security, balanced nutrition, health, sanitation facilities, housing and the purchase of livestock.

The implementation of an action plan, based on the identified objectives, is monitored by a committee within the groups. With knowledge and skills from the module ‘Participatory Monitoring and Evaluation’, farmers themselves develop key indicators for keeping track of group activities and outcomes towards set objectives. Gender balance in defining these indicators is assured by involving both male and female farmers equally. In the next step, the committee members, together with the group, design simple tools for collecting required information and monitor the progress in a group as well as at a household level. After compiling collected data, they report progress to the other group members. Most farmers perceive the definition of goals as well as monitoring of these as a motivation to work harder.

In the ‘Participatory Market Research’ module, marketing committees of the group identify and evaluate market opportunities for different products. Based on simple tools, the group members learn to systematically collect market information for different commodities, taking into account required quality standards. The core activity of this module is to visit potential buyers such as hotels, schools, supermarkets, agritraders and food exporters. Not only do farmers learn about prices and product requirements, they also become confident in negotiating prices with customers and establish trade agreements. Carrying out a structured market chain analysis helps them to understand the positions of different actors in the value chain. In a cost-benefit analysis, farmers find out the prevailing production costs and the price needed to make profit with an enterprise. Despite exploring new markets, food security for participating households is given the highest priority when evaluating different options for production. Based on the results, farmers select two potential enterprises they want to engage in.

As some farmers might not have enough experience with selected enterprises, they first gain knowledge in producing respective crops, or they refine their practices in order to fulfil demanded quality standards. In the ‘Farmer Participatory Research’ module, farmers learn how to design experiments and systematically draw findings from these. Prior to experimentation, farmers learn about the concept of sustainability in relation to the management of natural resources as well its importance for business. Bearing these principles in mind, an experimental committee designs field trials, monitors and analyses them, and gives feedback on their findings to other members. Groups in the ERI East Africa Project are experimenting with different seed varieties and practices for soil fertility management, and they are trying out new technologies such as drying fruits or making soap from oil plants. Some farmers have developed a strong interest in doing their own research, such as Mrs. Betty Kibirango from Central Uganda. She is observing the behaviour of local chicken at her homestead and discusses conclusions, e.g. on the effect of vaccines, with other group members. After carrying out experiments with crops in a group, she was also able to transfer the principles of experimentation to livestock.

In a gradual process, the ERI groups gain experience in production and marketing and become rural entrepreneurs. Monitoring tools and self-evaluation activities help them to stay on track towards earlier defined visions and goals. In the final module ‘Enterprise Development’, farmers study market intelligence, business planning, and contract management in order to set up strong and sustainable businesses with selected products. With a higher number of producers, more profitable agricultural commodity markets become accessible. Producer associations and co-operative structures play an important role for farmer groups to reach larger quantities and fetch higher prices. Since farmers in the ERI project have full ownership of their enterprises, they define limits themselves.

The Birungu Organic Farmers Association in Hoima district, Western Uganda, has taken the entrepreneur skills to the next level. They worked in an earlier ERI project with the University of Natural Resources and Life Sciences in Vienna (BOKU), CIAT and African2000 Network from 2007 until 2010, funded by the Austrian Development Agency. When the project ended, the association remained together and hired a two roomed store in the nearby trading centre. They started bulking maize, soya bean and rice produced by individual farmers of the association, which has been growing in the past years and now has several contracts with different grain and seed buyers. A credit scheme around the association helps the farmers to finance their business.

What makes ERI different from other approaches?

ERI overcomes the linear mode of technology transfer; it builds on participatory development and puts farmers at the centre of the development process. It recognises available natural resources as a key asset and focuses on a group learning process, social organisation as well as building up networks to other stakeholders in the value chain – there is no provision of free inputs like seeds, tools or livestock to farmers by implementing organisations. Community Development Facilitators support farmers in establishing links with other stakeholders such as input-dealers, traders and other institutions that might be helpful for them. However, when it comes to negotiations and setting up arrangements for co-operation, farmers themselves take over. Whereas in most contract farming arrangements, where companies actively approach farmers, ERI turns these relationships upside down.

Farmers working with ERI appreciate the approach because it is people-centred and recognises differences in agro-ecology, markets, socio-economic conditions and cultural preferences. Empowering farmers with a methodological approach taps the potential to create tailor-made solutions for improved production and reaching more profitable markets. Farmers learn how to respond actively to changing environments, fluctuations in markets and social organisation. They become researchers and marketing specialists to form their own development process. As one farmer from YARD put it, “[with the ERI project] we have gotten a foundation and confidence, and now we are able to continue by ourselves”.