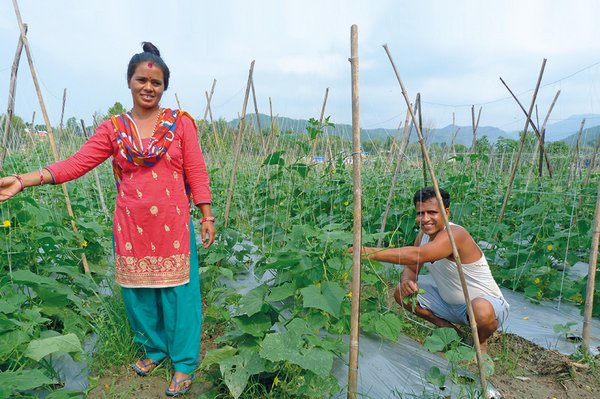 Ganesh Kafle – posing here with his wife by a new and more efficient method of cucumber cultivation – spent four years working in Dubai and Qatar. He has turned his farm into an agriculture learning centre.
Photo: Jane Carter

In recent decades, foreign labour migration has been a key source of income for as many as half of all rural Nepalese families. Returnee migrants often bring dynamism, new ideas, and – if they are lucky – some capital to invest. This is contributing to a revival of farming in the country's mid hills, using innovative practices and new crops.

Rajesh Thapa Magar casts an eye over his trellises covered in kiwi vines, and smiles. The trellises stand on numerous terraces of his small farm, while further below, there are also polytunnels housing various varieties of chilly, tomato and aubergine plants. Cardamon bushes green the banks of a small stream, shaded by fodder trees that feed his goats, and various other crops are being tested in small plots. But it is the kiwi fruits that are proving to be the most profitable. “I learned the basics of market gardening when I was in Malaysia,” he says, “and all through the years that I was there, I dreamed of coming home and putting some of my knowledge into practice on my own farm.” This is exactly what Rajesh has done in his village of Gogane in Diprung rural municipality. He is perhaps exceptional in that his experience as a migrant worker was relevant to his current livelihood, but he readily admits that he also learned many new things on his return. It was the rural municipality that identified him as an innovative farmer, encouraging him to develop his skills and transform his farm into what is termed an agriculture learning centre. The municipality was supported in this by the SDC Nepal Agriculture Services Development Programme (NASDP), or Prayas by its Nepal name (see Box at the end of the article).

The cultivation of kiwi fruit is a relatively recent phenomenon in Nepal, but a very promising one so far. Rajesh was careful to investigate the market before he invested too much. His enquires showed that the fruit was and remains in high demand in the capital Kathmandu – this is largely because of public awareness of its high vitamin C content. Facilitated and supported by the municipality and Prayas, Rajesh attended a course on kiwi cultivation in which he learnt about grafting, pruning and the establishment of trellises. By the second year, his vines were producing fruit, and in 2020, he harvested 900 kilograms from which he earned 140,000 Nepalese rupees (nearly 1,200 US dollars). This is a handsome amount for a farmer in his position. Rajesh is also demonstrating cultivation methods to other farmers – not just regarding kiwi vines, but other crops, too. As an innovator, he believes in diversifying his options, although he is also keen that other farmers follow his example. The more his neighbours produce, the easier it is to organise common transport to market. When his kiwi vines began production, he and his family members, sometimes aided by hired labourers, had to rise before dawn each morning to headload baskets of kiwi fruit to an awaiting vehicle. This entailed a steep climb of over 30 minutes, each of them with 50 kilograms on their backs. The dirt road running by their house was in such a poor state that it was unpassable. With others in the neighbourhood, Rajesh requested the municipality to allocate funds for road repair. Recognising the potential for transporting agricultural produce (and the eventual tax revenue from profits), the municipality obliged. There is no longer a need to carry heavy loads uphill; instead, a vehicle comes to the farm gate.

When one meets a farmer in rural Nepal who is trying something different or has a particularly well managed farm, it often transpires that there is a connection to migration (also see upper Box). Maybe it is a man who spent some time abroad and has returned to his ancestral land with a wish to innovate. Maybe it is a woman whose husband has sent back money from his overseas job, giving her the chance to invest. Sometimes it is the woman herself who has travelled, although this is far less common.

FOREIGN LABOUR MIGRATION – INTERRUPTED BY COVID-19
Every day, some 1,500 individuals – mainly young men – used to file through Kathmandu’s airport on their way to overseas employment. The Gulf countries and Malaysia were the prime destinations. When the Covid pandemic took hold, flights halted – stranding some migrants abroad against their will and preventing others from leaving. More recently, air travel has recommenced, but there is considerable hesitancy in the overseas job market. Many would-be migrants – whether first-time or “seasoned” travellers – are having second thoughts.

The Prayas project team recognised the innovation potential of returnee migrants and, as part of their advice to municipalities, recommended that special focus be given to such individuals. In the first fiscal year that municipalities were established (2017 – 2018), Prayas provided a small amount of seed money to them to support agricultural activities – including one budget line reserved for working with returnee migrants. This sparked a variety of activities that have expanded in subsequent years, with the municipalities using their own budgets. Examples of these activities – mainly encouraged through the provision of training but also some subsidised equipment – are outlined in the Table. 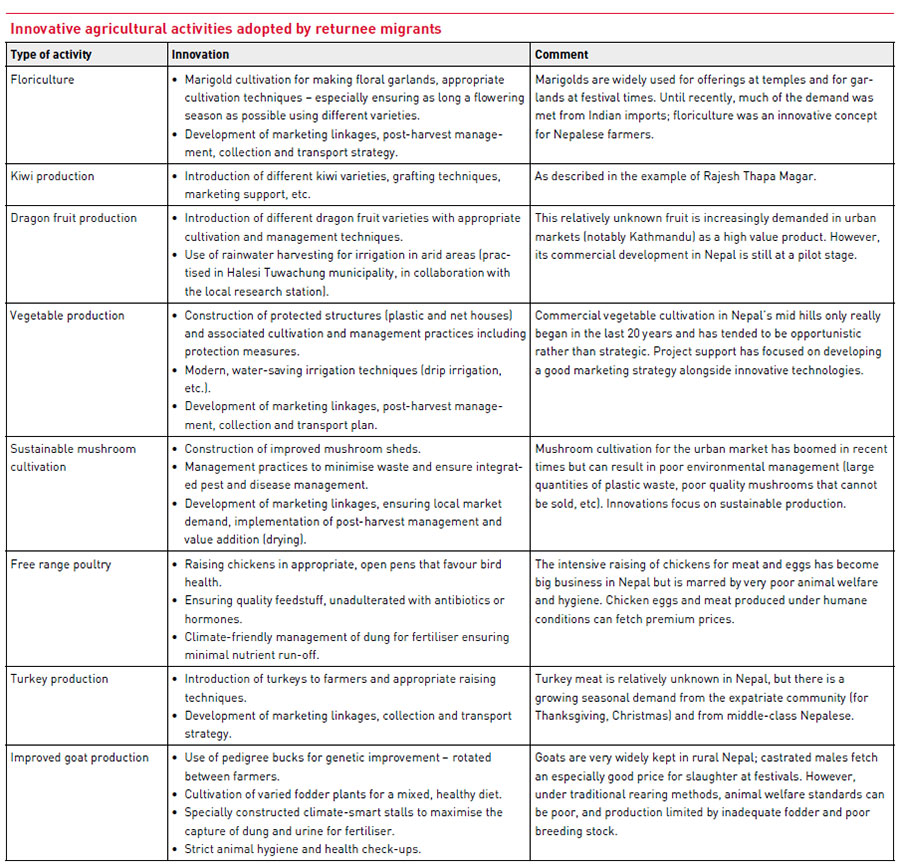 As can be seen from the table, Prayas has aimed to encourage innovations that are climate-smart, as well as improving animal welfare. At the same time, the development of an appropriate marketing strategy has been an essential part of most endeavours. Municipalities can play an especially important role in this respect – from ensuring the necessary physical infrastructure of rural roads, collection points, and local market stands to networking with buyers, identifying promising products and organising appropriate training. Municipal support for marketing went one step further during the period of COVID-19 lockdown in 2020, when private transport providers were unable to operate; the municipalities themselves organised so-called agricultural ambulances to transport produce to urban markets.

The goal of Prayas was not simply to increase agricultural production through better services provided by diverse actors, it was to do so in an inclusive manner, ensuring opportunities for disadvantaged women and men with very limited resources. In this respect, singling out returnee migrants for support may be questioned. They are not, generally, the poorest members of the community, and the very fact that they often have some savings to invest implies the opposite. It could be argued that as individuals with an innovative disposition, ready to take risks, they are the last people who need support – they will probably manage to make a livelihood anyway.

There are three counter arguments to this viewpoint. The first is that, left to their own devices, returnee migrants might invest in something other than agriculture or (more likely) invest in farming without thoroughly assessing the options. Like any other business venture, agricultural enterprises require sound knowledge of production and marketing aspects as well as good financial planning. Adequate technical support for the incubation and nurturing of new ideas can be crucial to success.

The second argument is that successful returnee migrants can serve as an inspiration and example – taking risks that can be copied with potentially less risk by other farmers. Rajesh Thapa Magar illustrates this well; he is someone who comes from a very modest background and is respected both within his community and more widely for his hard work and dynamism. Others have come to his farm to learn from him and have followed his lead.

The third argument is that returnee migrants generate opportunities for others. During the peak season of three months a year, Rajesh hires up to ten daily labourers. This valuable local employment, which often goes to women, is replicated by many other returnees. Municipalities can also insist that subsidies provided to innovative farmers are shared within farmer groups. For example, if one farmer is subsidised in the purchase of a power tiller or planting device, the municipality will oblige him or her to lend it at a favourable rate to other group members who thus gain access to equipment without having the burden of making a capital investment or taking a loan.

To conclude, we would like to stress that working with returnee migrants is not simply conceived in terms of “trickle-down theory” – helping the most dynamic so that others follow. Rather, it is one strategy amongst others adopted by municipalities, with Prayas support, to foster agricultural opportunities. This article simply focuses on one part of that overall approach.

NASDP/ PRAYAS IN BRIEF
The Nepal Agriculture Services Development Programme (NASDP) operated from 2016 to 2020, eventually covering 61 municipalities in different parts of provinces 1, 3 (Bagmati) and 6 (Karnali). A bilateral project of the Swiss Agency for Development and Cooperation (SDC) and the Government of Nepal, it was implemented with technical assistance from Helvetas. The project was designed before Nepal’s federalisation – a major political and administrative change that swept away the former system of 75 (eventually 77) districts reporting to a central government and replaced it with 753 municipalities, 7 provinces, and one federal government. Exclusive responsibility for agricultural extension services, formerly organised through the districts, was devolved to municipalities. The implementation of federalisation meant that the approach adopted by Prayas also had to change – to focus on supporting municipalities in their new role. This was no easy task, given that they lacked appropriate policies, laws and systems as well as having inadequate numbers of trained staff. However, the project was able to give substantial technical assistance.
More information: www.rural21.com/english/from-our-partners.html

Jane Carter is currently Senior Adviser, Natural Resource Governance at Helvetas Switzerland. From April 2017 to September 2020, she was based in Kathmandu as Director, Programme Development for Helvetas Nepal.
Contact: jane.carter@helvetas.org

Sudha Khadka was the Prayas Team Leader and currently works for Helvetas Nepal as National Manager for the Nutrition in Mountain Agro-Ecosystems (NMA).
Contact: sudha.khadka@helvetas.org