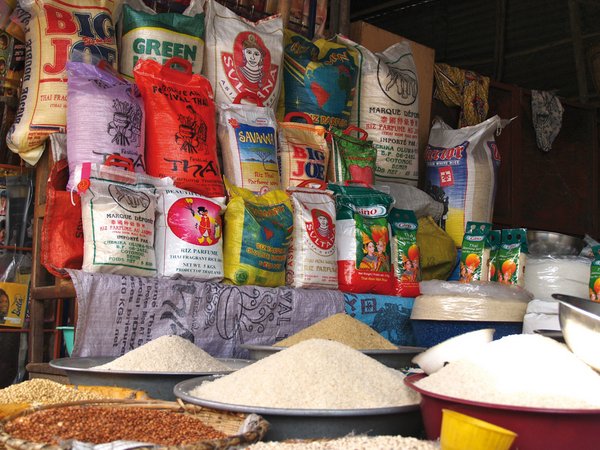 Dependence on imports is a risky strategy for a country that is increasingly turning to rice as a staple food.
Photo: R. Raman, AfricaRice

As food import dependency has grown, many African countries have attempted to boost local agricultural production. With rice production increasing in Senegal, organisations are progressively upgrading rice value chains in order to compete with imports. Yet investors are now grappling with ways to raise demand for their product. How should local rice be marketed to African consumers?

Senegal is one of the most food-import-dependent countries in sub-Saharan Africa, especially when it comes to rice, a main staple of the diet. It is the third largest rice importer in Africa, after Nigeria and Côte d’Ivoire. In 2011, rice was the greatest agricultural import in the country, about 39 per cent of its total agricultural imports. Around 61 per cent of Senegal’s rice consumption is currently met via imports, which has drawn the government’s attention to local production. In recent years, the Senegalese government and other organisations have poured money into increasing production. However, while they are expanding production and enticing investment in the rice industry, there has also been recognition that production alone is not a comprehensive solution. Organisations recognise the need to upgrade Senegalese rice value chains in an attempt to compete with imported rice, by creating greater demand for local rice. Imported rice still dominates the market in much of the country, and many Senegalese still view local rice as inferior in quality to imported rice.

However, as organisations begin to develop marketing strategies for local rice, there is little material for them to employ. Organisations are now facing the question of how to effectively market local rice to consumers. For example, what are the most effective strategies for marketing to consumers? What ideas should the promotion target? And what kind of packaging and branding should be used for local rice?

To address this issue, the research focused on packaging as a marketing tool for local rice. It concentrated on the following question: Should local rice brands mimic imported brands or should they create a distinguishable identity? In other words, should organisations emphasise the local aspect of the product or should they mimic the style of well-known imported rice brands?

In urban markets in Senegal, two different types of brands can be distinguished: “local” and “international”. Local brands reference Senegalese or African culture (i.e. a picture of a drum, lion, or baobab tree), and are written in Wolof or French. International brands do not use local references, and often reference an international symbol (i.e.
a rose, chandelier, or the American flag), and are written in English or French. Based on this information, we developed eight prototypes of rice brands and, through a participatory choice experiment with two local women’s associations (based in Dakar and Saint-Louis), four brands were selected for use in the study: two local (Ndanane – “Elegant” and Sunu Ceeb – “Our rice”) and two international (Noblesse and Happiness).

Next, a market experiment was conducted in two Senegalese cities, Saint-Louis and Dakar, with a total of 241 urban Senegalese women. The study elicited urban consumers’ preferences for international versus local rice brands, as well as differences in willingness to pay (WTP) between the two types of rice brands. We used an endow-and-upgrade experimental auction for the study (see Box below). We focused on women as they are the major decision-makers in rice purchasing in Senegal. Female participants were randomly approached on the market to participate in the study and were told they would be given one kilogram of rice. Each participant was shown a pair of differently branded rice bags, offered the opportunity to examine the rice in both bags, and asked to state her preference. The rice in both bags was identical, although this was not revealed to participants.

Experimental auctions act as a tool to measure consumers’ WTP for different products. Participants bid to buy actual products using their own money, which incentivises people to truthfully reveal their real value for each product. The experimental auction used in the study, the BDM (Becker, Degroot and Marschak) auction, conducts the auctions individually. Each participant bids against an unknown pre-determined price enclosed in an envelope. If her bid is higher than the pre-determined price premium, she wins the kilogram of the preferred rice brand and pays the pre-determined price premium. If her bid is lower, she does not win the preferred rice brand and takes the initial endowment home.

Each participant was then endowed with one kilogram of the non-preferred rice brand, which she had the opportunity to upgrade to her preferred brand. The participant was provided with the market price of the non-preferred rice (400 FCFA/kg or € 0.61/kg) and asked how much she would be willing to pay on top of that price in order to obtain a kilogram of the preferred rice brand. The WTP (to upgrade to her preferred brand) was recorded, and a questionnaire was administered to collect socio-demographic and consumer preference information.

Getting to know the consumer

The results show that both types of labels appeal to urban Senegalese consumers, with a higher preference for brands with a local identity. Urban consumers are somewhat more attracted by the local rice brands, which used Wolof brand names and symbols referring to Senegal or Africa. This preference is particularly strong close to the production zone, where consumers are perhaps more connected with local rice production. In Saint-Louis, local brands (68 %) are clearly preferred to international brands (32 %). In the capital Dakar – farther from the production zone and close to the port – preferences are somewhat more equally divided between local (57 %) and international brands (43 %).

The value of a brand

A significant finding is that consumers were willing to pay an average of 67 FCFA/kg (€ 0.10/kg) to upgrade to their preferred brand, a price premium of 17 per cent. The WTP was similar between local and international brands (69 FCFA/kg and 62 FCFA/kg respectively.) The rice used in both bags was identical; therefore, the label added 17 per cent in value to the rice.

Packaging is a significant part of the decision-making process in rice purchases in Senegal. The results show that 69 per cent of urban women purchase rice by the bag, and only 31 per cent purchase rice by the kilogram. Almost half (45 %) of households choose the rice they purchase by identifying the bag, rather than relying on an examination of grain quality. It was also found that 47 per cent of women identify brands by colours and/or symbols, rather than by the brand name.

Recommendations: Using marketing as a tool

Use colours and symbols wisely. A large share of the population identify brands by colours and/or symbols. Accordingly, this should also play a major role in further research and marketing strategies. In Senegal, where women are the main rice purchasers and literacy among women is around 30 per cent, this is an important aspect to consider in upgrading rice value chains.

Be consistent. As Senegalese consumers become familiar with rice brands, they associate each brand with a certain standard of quality. Local rice, however, does not ensure the same reliability. The same rice labels are often used for different varieties, grain sizes, and varying levels of cleanliness. In order to build an effective brand, local rice producers should create different labels for various rice types, and should also ensure the same level of quality in each bag.

Use targeted marketing strategies. Organisations should consider targeting their rice to different segments of the market. For example, organisations may find that international labels are more successful in supermarkets in Dakar, where consumers are less familiar with local rice and may be more brand-conscious. Conversely, they may find it more effective to use local labels in markets close to production zones, where consumers are familiar with local rice and may be less brand-conscious. An alternative strategy is to target both market segments simultaneously through a “hybrid” brand, such as the Terral brand introduced by the Belgian impact investor Durabilis.

Future research. In order to focus on brand name and concept and to avoid excessive contributing factors, this study used only black and white designs in the labels. Future research should be conducted in order to analyse which bag colours are best suited to both attract Senegalese consumers and create a distinguishable identity for local rice.

As organisations recognise the need to upgrade rice value chains alongside production growth, marketing research needs to be an integral part of the solution. The results show that packaging is a significant part of the decision-making process in rice purchases in Senegal, reinforcing the idea that consumers are responsive to labelling. Furthermore, consumers were willing to pay price premiums of 17 per cent for their preferred brand, demonstrating that there must be a greater focus on marketing research as a way to improve the competitiveness of local rice. Marketing is an important tool in adding value to local rice in Senegal, and should be utilised effectively as organisations work towards increasing demand and creating a successful rice sector.