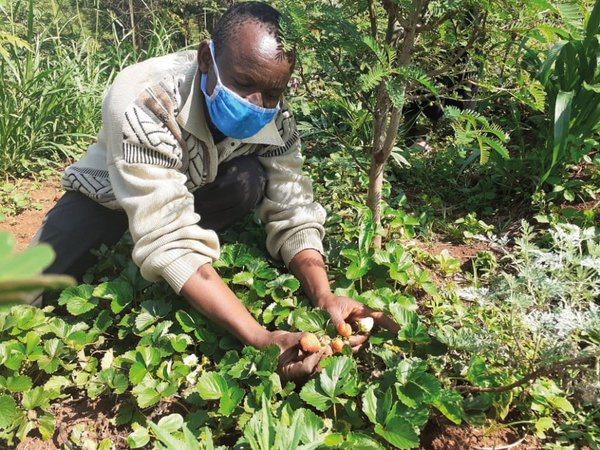 In Kenya, vermicompost is for example used in horticulture.
Photo: GIZ/ Goudian

How investing in soil-related inputs and services pays off

Agroecological means of production prioritising the utilisation of locally available resources to replenish nutrients, improve soil structure and enhance below-ground biodiversity are paramount for sustainable agricultural productivity. Healthy soils allow for a higher fertiliser-use efficiency, hence lowering the costs for farmers and the economy. The project “Soil protection and rehabilitation for food security” (ProSoil; see Box) run by Deutsche Gesellschaft für Internationale Zusammenarbeit (GIZ) fosters different approaches to sustainable soil management in Benin, Burkina Faso, Ethiopia, Kenya, Madagascar, Tunisia and India. The aim is to improve the food situation of smallholders and to open up new sources of income. In the following, some examples and lessons learnt are presented.

ProSoil
The programme ProSoil is part of Germany’s special initiative “One World – No Hunger”. It is co-funded by the European Union and the Bill & Melinda Gates Foundation. In addition to small farming businesses and the relevant state institution players from the academic and research communities, the private sector and civil society are involved. Since the beginning of the programme in 2014, soil degradation has been reversed on 500,000 hectares of land, resulting in an average yield increment of 40 per cent.

Many ways to create healthy soils

Vermiculture as an alternative or complement to mineral fertiliser
In Western Kenya, maize is the main staple crop. It is usually grown by smallholder farmers using a sequence of diammonium phosphate and calcium ammonium nitrate. Both fertilisers are also applied when cultivating sugar cane and tea, which are the most common cash crops in the region. However, their continuous application, in combination with leaching of soil organic matter, has led to soil acidification. In such cases, mineral fertilisers have lost much of their effectiveness, and farmers tend to produce at a loss – even more so since fertiliser prices in Western Kenya have doubled over the past year, reaching a point where agro-dealers even shy away from procuring a product which most of their customers cannot afford.

In such a scenario, compost production using earthworms has proven to be a viable alternative. Earthworms significantly decrease the time frame required to produce quality compost and generate a liquid by-product that can be used as biofertiliser. In the maize-growing systems of Western Kenya, the application of compost at planting and of the liquid biofertiliser at the growing stage proved highly effective in replacing the conventional mineral fertiliser sequence. The biomass required for compost production is usually generated from green manure cover crops, agroforestry trees and shrubs as well as purchases from neighbouring farms. This way, smallholders in Western Kenya can cushion themselves against volatile input prices and similar shocks to their livelihood systems.

Demand creates supply – lime as a game changer
A total of 3.5 million hectares of Ethiopian soils is acidified. Lime can alleviate this type of soil degradation and increase fertiliser use efficiency but has been largely unknown in Ethiopia. Farmer-led trials and capacity development have created awareness and demand among farmers and the development of different supply chains with varying degrees of public and private sector involvement. Currently, specific intervention areas are trialling the sales of lime via private agro-dealers, with local government agents facilitating the process.

Additionally, the Ethiopian government distributes lime sourced mainly from cement factories at a subsidised price. Completely government-run supply systems are slowly receding as crushers have often proven inefficient and produced beyond market price. The government has also decreed that no-one should distribute lime for free in order to wean farmers off dependencies and encourage the development of sustainable supply chains. To achieve impact at scale, this is supported by the introduction of lime spreaders, soil pH testing, policy advice on tax reductions and the involvement of micro-finance institutions.

Urban compost – from recyclable waste to a profitable soil enhancer
In India, more than 54 million metric tons of municipal solid waste is generated each year, 50 per cent of which is organic. Without treatment, organic waste, containing valuable nutrients and carbon originating in agricultural fields, accumulates in urban environments where it produces harmful greenhouse gas emissions from landfills. There is a potential to recycle urban organic waste into compost and other soil enhancing products to return nutrients and carbon to rural agricultural soils to counteract degradation. This has resulted in a viable business model for the public and private sector in the State of Maharashtra in western India, which has turned out to be a triple-win contributing to economic gains, the national land degradation neutrality targets and climate goals.

Piloted from 2019 to 2021 in selected cities near the programme locations, the “Urban Rural Nutrient and Carbon Cycle” (URNCC) is a multi-sectoral and multi-stakeholder circular economy scheme practicing an end-to-end approach addressing supply chain, institutional and policy gaps by supporting research, capacity development, product branding and the establishment of market linkages using digital solutions. The state government provides subsidies as incentives for the production and sale of certified compost, while compost producers organised in farmer producer organisations (FPOs) work together with selected villages and farmers to establish demonstration plots to showcase city compost application on various crops. The key element is a specially developed digital marketing platform called “Harit Ticker”. “Harit” means “green” in Sanskrit. Currently, 30 FPOs with a potential of around 10,300 farmers, and 396 municipal compost producers (100 per cent in the State of Maharashtra) are registered on the digital marketing platform. In Maharashtra alone, there is a potential to produce 350,000 metric tons of city compost each year, representing a business potential of around 20 to 25 million euros for compost producers.

Much agronomic evidence has been generated around soil management concepts and practices. Yet, these may still seem novel in a certain context, causing land users to at first be hesitant to adopt them. Especially in smallholder farming, with its widely differing realities, “one-size-fits-all solutions” do not exist. Nonetheless, experience from ProSoil suggests that it makes sense to employ the following key principles when providing agricultural advice to smallholder farmers:

Start with quick wins.  Immediate returns within the first growing period encourage the adoption of new practices and prepare the ground for long-term investments. Soil protection certainly is an investment in the future, making it all the more important for promoted technologies to yield visible impacts. Agricultural advisors can then build trust among farmers, and farmers  can satisfy immediate needs regarding food security and income before investing in long-term solutions.

Seeing is believing. Realistic demonstrations are key to convincing farmers and encouraging transfer of knowledge among them. Smallholder farmers are highly risk-averse and hence often reluctant to adopt new technologies. It is therefore of utmost importance that demonstrations take place in the vicinity of the farmers concerned instead of at peri-urban research stations. Multiple new practices are introduced at once to have a combined effect. Through comparative demonstrations along with studies, increased yields, improved quality of the produced crops and a higher net profit compared to the farmers’ practice become more apparent when a whole new set of improved practices is applied during the first season.

Feed the soil, not the plant. A holistic understanding of the soil ecosystem enables farmers to discover soil health aspects beyond nutrient replenishment. The importance of soil organic matter and soil biota often remains underestimated. In some instances, grasping the soil topic in its totality can be achieved by linking it to human nutrition in narratives. An acidic stomach needs treatment, and so does acidic soil, for instance applying lime. In addition, so-called Soil Health Cards in conjunction with providing access to local soil testing facilities allow for a better understanding of critical soil parameters and macronutrient status. Along with this information, farmers receive recommendations on suitable practises such as recycling of on-farm organics, organic manures and bio-fertilisers in conjunction with reduced chemical fertilisers.

Make local knowledge count. Agricultural advice considering local conditions and expertise is most effective. Farmers are not only recipients of trainings but innovators and a testing authority for the project assumptions; they make their own decisions and adopt, adapt and reject technologies based on what is suitable under the natural and socio-economic conditions of a given location. Project monitoring and knowledge management systems need to capture such lessons learned. In the long term, the necessary improvement of science-extension-farmer interaction requires time and financial investments – especially in the context of soil rehabilitation.

Healthy soils support ecosystem services such as carbon sequestration and water retention, which benefit society as a whole. Hence, much emphasis in land management programmes is placed on strengthening the public sector’s capacities and resources. Its commitment is of particular importance where the merits of sustainable soil and land management to society outweigh the immediate benefits for individual farmers (e.g. erosion control). Soil amendments fast-tracking the improvement of soil health, on the other hand, often entail a business case and thus qualify for private sector engagement.

As the examples show, both sectors contribute to import substitution, domestic employment creation and food security. Against this background, increasing awareness and ownership for soil health among both private sector investors and political decision-makers is equally important. Determined efforts to reclaim and conserve soils world-wide are necessary to acknowledge their key role in food production, agriculture’s adaptation to climate change and carbon sequestration.

David Kersting works as a project manager for ProSoil in Kenya. He is a geographer by training and worked for GIZ in Addis Ababa, Ethiopia and the International Fund for Agricultural Development (IFAD) in Rome, Italy before joining the ProSoil project.
Stephanie Katsir is an environmental scientist and geoecologist and works as an advisor for ProSoil in India. Previously, she was an international consultant for the Global Soil Partnership at FAO in Rome.
Julia Doldt is an agricultural expert working as an advisor for ProSoil in Ethiopia. Prior to that she was active on commercial farms in Namibia and South Africa.
Contact: soilprotection(at)giz.de