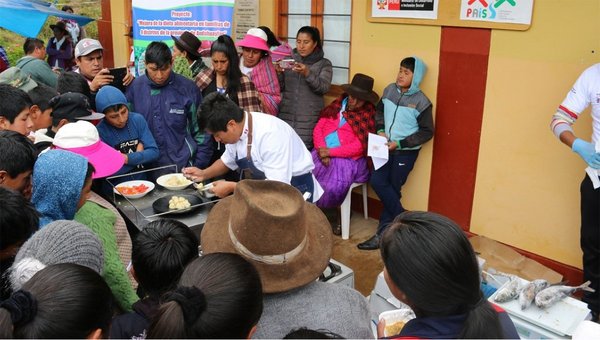 Over half of the population living in rural mountain areas in developing countries suffer from food insecurity and unbalanced diets. Working with well-embedded rural service providers has proven to be a promising strategy to alleviate this situation, as the “Nutrition in Mountain Agro-ecosystems Project” reveals.

A recent report by the Food and Agriculture Organization of the United Nations (FAO) on vulnerability to food insecurity in mountain areas shows that the number of mountain people vulnerable to food insecurity in developing countries increased from 243 to almost 350 million between 2000 and 2017. Nutrition insecurity in mountain regions mainly results from difficult climatic and topographic conditions which coincide with lower productivity levels, seasonal production and market access challenges to purchase complementary food. Overall, traditional mountain diets tend to depend heavily on starchy food, with low levels of proteins, essential vitamins and other micronutrients, especially iron. Moreover, the purchase of additional nutritious food is hampered by the general low purchasing power of rural communities and limited awareness of what constitutes a balanced diet and its impact on health.

With financial support from the Swiss Agency for Development and Cooperation (SDC) as part of its Global Programme Food Security, the ‘Nutrition in Mountain Agro-ecosystems (NMA)’ project was implemented in two phases in five mountains ranges by IFOAM – Organics International, Helvetas, the Research Institute for Organic Agriculture (FiBL), and Wageningen University, Netherlands, in close collaboration with a partner organisation in each target country. The project’s approach was to involve a significant number of rural service providers (RSPs) who would be trained in nutrition-sensitive agriculture (NSA) approaches (see Box below) and go on to successfully implement NSA related projects in their contexts. These projects would then directly lead to an improved nutrition status and trigger key learnings that would inform future projects.

Nutrition-sensitive agriculture (NSA) relates to a system-based approach that targets agricultural production systems as a means to improve the nutritional status of households and individuals. It centres on the introduction and promotion of a more balanced diet involving nutritionally rich food production, complemented with income enhancing strategies and nutrition related education (i.e. ‘food literacy’) that positively impact production and consumption patterns in a local context. All in all, NSA interventions pursue sustainable solutions to promote and ensure nutrition security in vulnerable rural agriculture-based areas.

Fostering capacity development at all levels

The NMA project started in 2015, focusing initially on five countries in three continents: Ethiopia, Kyrgyzstan, Nepal, Pakistan and Peru. In each country, selected rural service providers participated in a capacity development programme receiving in-person and virtual trainings to gain further insight on NSA. Criteria for selection were, amongst others, a leadership function in a rural community (be it in governmental, private or civil society sector) and the capacity to develop concrete NSA interventions. The capacity development programme was used to fine-tune and monitor the NSA projects of each rural service provider, known as micro interventions (MIs), focusing either on production, processing, marketing, awareness raising or a combination of them. The capacity development programme in each country created the required context for the involved rural service providers to meet and interact, thus allowing to learn from each other by jointly reflecting on their experiences.

During the first project phase (2015–2018), a web portal called Mountain Agro-ecosystem Action Network (MAAN) was also established (see maan.ifoam.bio/). The platform’s aim was to foster the sharing of relevant information about NSA and project-related initiatives and experiences within and across countries. While the global site was maintained by the three project consortium partners, the country pages were managed by the country coordinating entities, who also supervised the implementation of the MIs. Beyond this web platform, the project approach and tangible NSA experiences were actively shared at numerous national and international events in the scope of the project’s advocacy work.

Upscaling the most promising interventions

Following a peer review evaluation of the project’s first phase, which revealed a positive impact on the nutrition status of beneficiaries in the five initial target countries, a second phase started in 2018, aiming to up- and outscale the most promising NSA interventions. The project’s geographical scope expanded to include three more countries: Ecuador, India, and Tajikistan. Essentially, the project now supported ‘SUNSAIs’, a term which was created as an abbreviation for ‘Scaled-up Nutrition-Sensitive Agriculture Initiatives’.

In contrast to MIs, which were implemented by individuals and had a time span of one year, reaching on average ten households, SUNSAIs were implemented by institutions (NGOs, universities, private companies and governments) and had a wider outreach. Each SUNSAI targeted between 500 and 1,000 producers and 5,000 to 10,000 consumers over a period of around two years. Overall, 35 SUNSAI projects were implemented in the framework of NMA, involving a minimum 50 per cent share of co-financing by implementers.

Thanks to new implementing partners in the second phase, the capacity development programme expanded to involve in total 778 rural service providers across the eight countries over the course of the NMA project. MIs continued to operate in most countries with funds from sources external to NMA, reaching a total number of 518 MIs for both project phases. The number of projects varied per country (see Map). 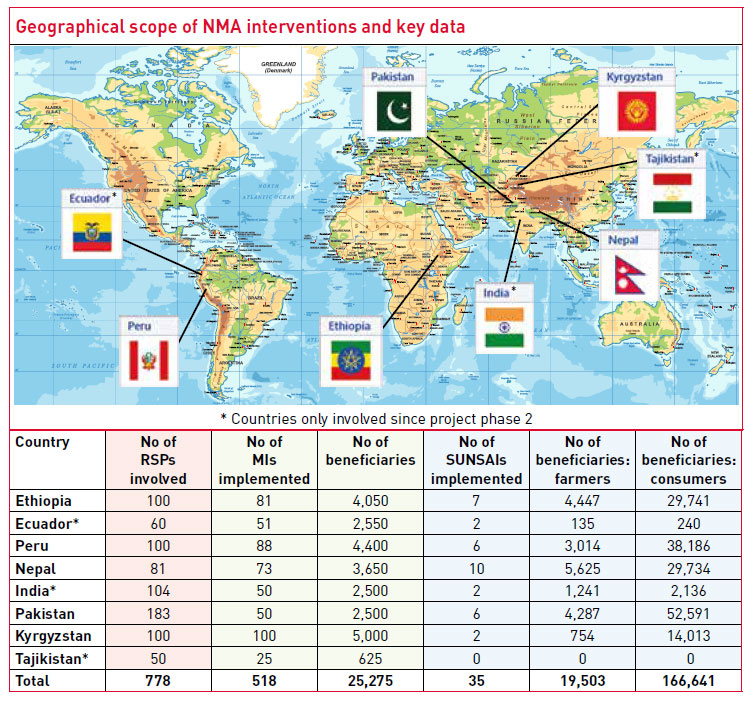 The experience with MIs during the project’s first phase showed how important it is to combine both production and consumption related aspects to stimulate nutrition-related changes effectively and sustainably. In practice, this meant that awareness creation activities had to be interlinked with interventions focusing on innovative ways of food production and processing. While certain SUNSAIs promoted the introduction and processing of crops with particular health properties (e.g. quinoa, millet, moringa, apricots) or the establishment of animal husbandry to increase protein consumption and income generation (e.g. egg production, goat raising), other SUNSAIs aimed at diversifying (organic) vegetable production. In all projects, food literacy activities were an integral part. In some SUNSAIs, by developing educational radio programmes (Nepal) and theatre plays (Ecuador), awareness creation has been the main focus of interventions.

In many SUNSAIs, local authorities were involved in the implementing consortium, or acted as a partner organisation, capitalising on existing support structures to propel further action for improved nutrition outcomes. Also, after having received specific trainings on advocacy as part of the project’s capacity development programme, many rural service providers successfully engaged in government funded rural development projects involving NSA. Thereby, the project’s advocacy work at the national level played an important role in committing national and local governments to NSA, by financing their own additional MIs. Overall, 518 additional MIs have been implemented without any financial support from NMA. 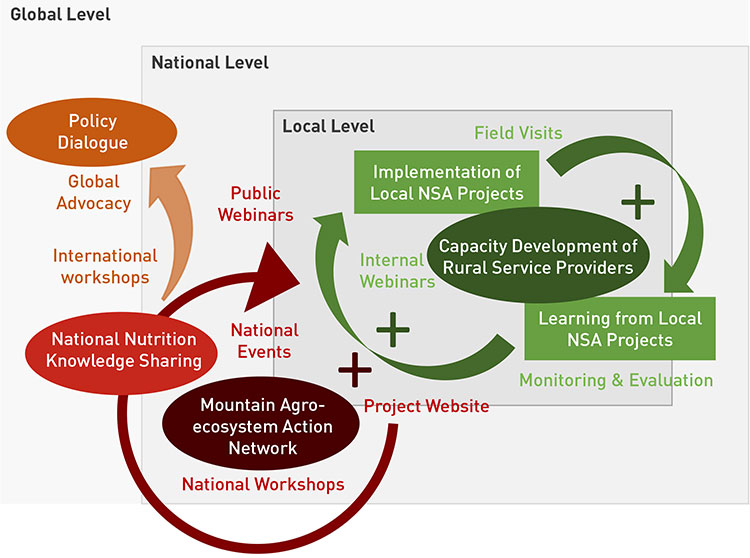 NSA is a promising concept to transform food systems and stimulate change for improved nutrition.
Especially in areas with limited market access, intervention approaches that combine agricultural innovations with nutrition-related consumer awareness are critical. Thereby, an enhanced understanding of the importance of dietary diversity for improved nutrition and health must drive sound NSA interventions, given the fact that eating habits, sometimes defined by misconceptions of what is healthy, are difficult to change. Trustworthy information about healthy foods must be coupled with tasty eating options for improved food intake, while innovations concerning agricultural production and food processing must be economically and socially feasible (i.e. must not require high investment costs and risks).

Overall, a precondition for successful NSA interventions is a sound understanding of the cultural values and perceptions that influence nutrition-related decision making at household level. Altogether, ‘gender comprehension’ is crucial to understand how food choices and cooking decisions are influenced by men, women and children – according to their varying roles and decision-making power within the household, i.e. who decides what is produced (for sale or for own-consumption) and cooked for whom and why.

Empowerment of rural service providers is critical to catalyse improved nutrition changes. As successful nutrition-related changes imply combined interventions on the consumption and production side, NSA interventions rely on a team of practitioners that together cover both aspects. Thereby, thematic knowledge and skills relating to agricultural production, food conservation and recipe development are just as critical as a sound trustworthy relationship with the beneficiaries. In this regard, rural service providers have shown to be critical change agents in NSA approaches. Their degree of immersion in local communities together with their capacity to interact and learn from peers and beneficiaries are fundamental as important success factors.

Relevance of concrete support and policy to foster NSA capacities in local contexts and advocate for NSA approaches at national and international levels. Overall, the importance of rural service providers and their capacities to successfully engage in NSA approaches as ‘change agents’ calls for explicit efforts to create networking and capacity building opportunities for RSPs, i.e. to connect with each other and learn from each other, thus fostering important human and social capital development to drive nutrition-relevant innovations in rural contexts. Especially, it is critical to link agronomic and health-related capacities, given the fact that ‘agriculture’ and ‘health/ nutrition’ are two intervention areas that are not commonly integrated: in education, support functions, administrative structures and development objectives. In most countries, a ministry of agriculture is in place that mainly focuses its support on enhancing yields of most important staple food crops, while a ministry of health contributes to an improved nutrition by providing supplements to the most vulnerable population groups (i.e. children, women, elderly). Yet, to successfully endorse successful NSA interventions, government policy must help create structures and interactions that bring these two disciplines and their practitioners together. This is especially true for the local level to drive tangible impact. At the national and international level, it will be key that NSA practitioners from both agriculture and health advocate together with experts for comprehensive NSA approaches – relying on well-documented best practice examples showcasing the approach in practice.

Capitalising on social media and digital tools to promote NSA and drive change. One of the main lessons learnt from the NMA project is the importance of social media as an effective tool for networking and learning. With the launch of the project, the MAAN platform was created as a web portal for rural service providers to connect with one another and share relevant information. Although this platform was regularly used and served its purpose, in all countries, rural service providers and country coordinators started to use additional communication channels, i.e. Facebook, Instagram, WhatsApp, Viber, Twitter.
Indeed, these social media tools are expanding very fast together with the increased use of smartphones also in rural areas. Their attractive features to easily share information – and options to ‘like’ and repost them – make these tools highly relevant for both networking and awareness creation purposes. Being well-known and, especially, their strength for sharing visual information, i.e. pictures and videos, are big advantages. Thus, any future efforts to promote NSA approaches should involve a sound strategy to optimise communication and development results through the effective use of social media. Thereby, influencer-marketing strategies will provide interesting entry points for reflection and action. 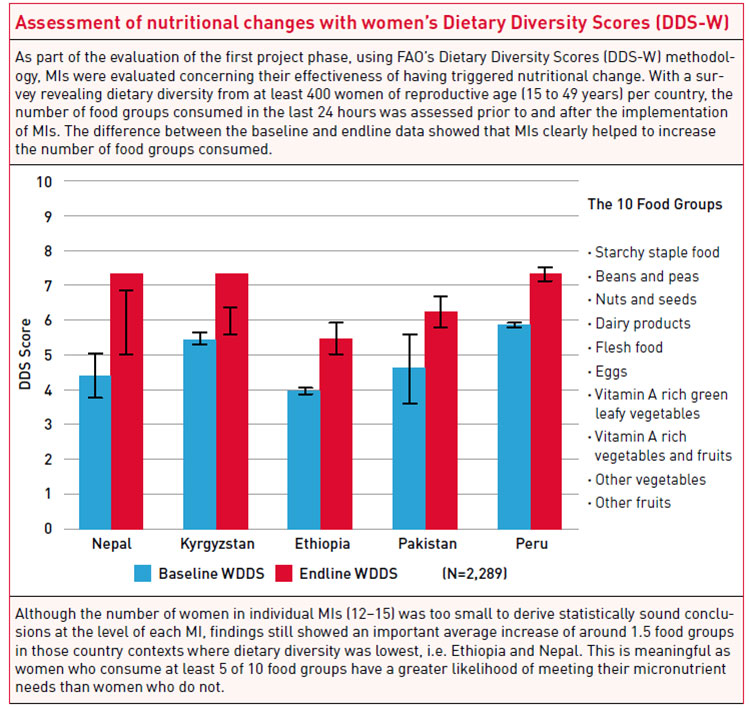 Ghezal Sabir composed this article as a consultant at the Research Institute for Organic Agriculture – FiBL.

Thomas Bernet is the focal person for the NMA project at FiBL, based in Switzerland.

The authors would like to thank all the country partners and the involved rural service providers for their commitment to the project’s NSA approach and their efforts in enhancing the nutrition and wellbeing of people in rural mountain communities in a respectful and sensitive manner. Then, we extent our thanks to Niamh Holland for having supported the writing of this article.