A touch of Fiji at the COP23 opening ceremony.
Photo: UNFCCC

How to support countries to achieve their NDCs

Since 2013, the (Intended) Nationally Determined Contributions – (I)NDCs – have been playing a crucial role in international climate diplomacy. Our author looks at the process from the INDCs to the NDCs and describes how the UN Food and Agriculture Organization (FAO) supports the countries in implementing them and which stance the international community took in this respect at the latest climate conference.

The 19th meeting of the Conference of Parties (COP) of the United Nations Framework Convention on Climate Change (UNFCCC) in Warsaw, Poland in November 2013 paved the way for a radical change in international climate policy. Whereas previous conferences had always negotiated globally determined targets to address climate change, COP 19 had now invited “all Parties to initiate or intensify domestic preparations for their Intended Nationally Determined Contributions (INDCs) towards achieving the objective of the Convention, as set out in its Article 2”. ‘Parties’, as Countries are called in the context of the UNFCCC convention, were given leeway to ensure that their climate change mitigation and adaptation objectives were nationally appropriate. Such flexibility gave developing countries scope to base their plans, including their National Adaptation Plans (NAPs; see Box on page 10), on their specific adaptation and mitigation needs.

The ultimate objective of this Convention ... is to achieve ... stabilization of greenhouse gas concentrations in the atmosphere at a level that would prevent dangerous anthropogenic interference with the climate system. Such a level should be achieved within a time frame sufficient to allow ecosystems to adapt naturally to climate change, to ensure that food production is not threatened and to enable economic development to proceed in a sustainable manner. UNFCC, Article 2

Each INDC would reflect a country’s ambition to reduce emissions, taking into account its domestic circumstances and capabilities. Two years later, in December 2015, 196 Parties came together at COP 21 in Paris, France and decided to transform their development trajectories towards sustainable development, aiming at limiting warming to 1.5 to 2 degrees Celsius above pre-industrial levels. Parties also agreed to a long-term goal for adaptation – to increase the ability to adapt to the adverse impacts of climate change and foster climate resilience and low greenhouse gas emissions development, in a manner that does not “threaten” food production.

National Adaptation Plans (NAPs) are a core vehicle to deliver on adaptation priorities, and towards achieving countries’ Nationally Determined Contributions (NDCs). The NAPs process was established under the Cancún Adaptation Framework in 2010, enabling Parties to the UNFCCC to identify medium- and long-term adaptation needs and to develop and implement strategies and programmes to address them. NAPs can build upon the National Adaptation Programmes of Action (NAPAs), established in 2001, to tackle least developed countries’ urgent and immediate needs to adapt to climate change. Many developing countries consider adaptation as their main priority because of the significant impacts climate change is expected to have on national development, sustainability and security and to address key Sustainable Development Goals under Agenda 2030.

The INDCs pitched before COP 21 were the trust building elements of showing countries’ commitments towards a new development pathway addressing climate change from a domestic and “bottom-up” perspective. The Paris Agreement, referred to as “historic”, entered into force on the 4th November 2016, having reached the necessary threshold of signatory countries. To date, 170 of the 197 Parties to the Convention have ratified the Paris Agreement. It turned the INDCs into NDCs – Nationally Determined Contributions, for those countries that had ratified their NDCs nationally. Now, every five years, each country submits its own climate change provisions to the UNFCCC Secretariat, which assesses them and establishes the overall climate benefit. In addition, it includes them in an “NDC Registry” for public scrutiny on the website. The notion behind this is that if the targets are not determined top-down, but are nationally owned and planned for, it is more likely that they will be met.

The next round of NDCs (new or updated) are requested to be submitted by 2020. Hence through NDCs, increased ambition and action will be formulated in and communicated by countries, which will be assessed by the global stocktaking, starting with the 2018 facilitative dialogues (which at COP 23 was renamed the Talanoa dialogue under the Fijian COP Presidency).

Agriculture sectors feature prominently both in the INDCs and the NDCs. A 2016 FAO report found that the 98 per cent of countries (131 out of 134) that include priority areas for adaptation and/or adaptation actions mention the agriculture sectors (which, according to the FAO definition, covers crops, livestock, forestry, fisheries and aquaculture), including 93 per cent of developing countries (see Figure below). Of these countries, 97 per cent referred to crops and livestock, 89 per cent to forests, and 64 per cent to fisheries and aquaculture. 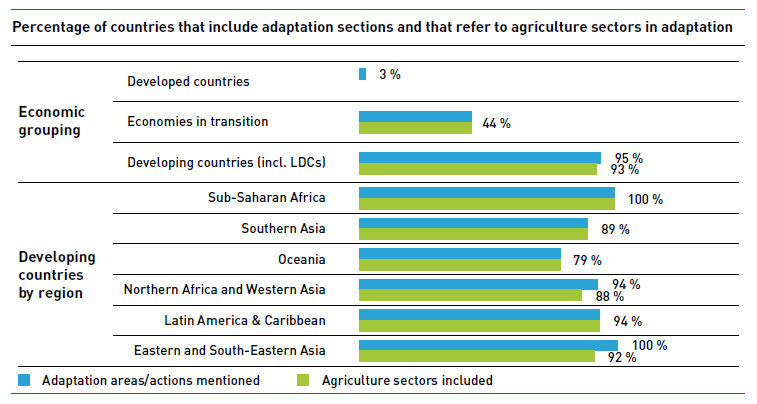 When describing their mitigation contributions, agriculture and land use, land-use change and forestry (LULUCF) are considered by 89 per cent of countries (168 out of 189). Here, the agriculture sector includes emissions from enteric fermentation, manure management, rice cultivation, prescribed burning of savannahs and grassland, and soils, while emissions related to forest and other land use are covered under LULUCF. The mitigation potential of agriculture and LULUCF is prominently acknowledged by developing countries in all regions and by all economic groupings. Actions put forward by countries in agriculture focus on cropland, livestock and grazing management. For LULUCF, the actions mentioned by countries can be grouped under forest management and restoration, afforestation/reforestation and reducing deforestation. The Figure below provides an overview of countries that cover mitigation in agriculture. For example, 16 per cent of countries that refer to agriculture are from Latin America and the Caribbean (LAC). Within LAC, 72 per cent refer to agriculture under mitigation in their INDCs and NDCs. 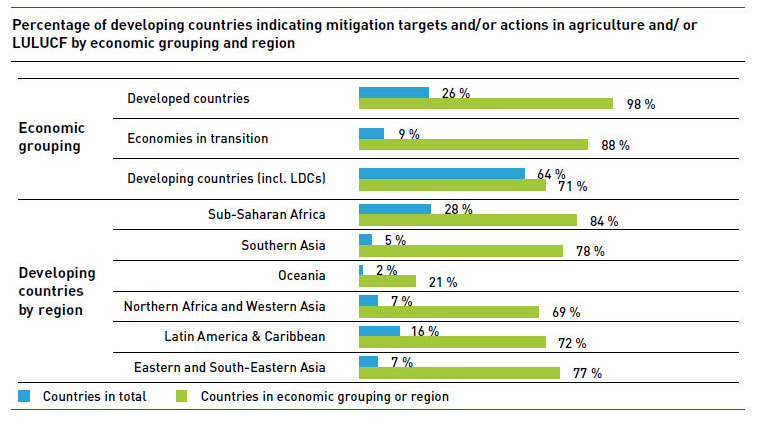 The fact that a total of 116 countries refer to the agriculture sectors with regard to both adaptation and mitigation is indicative of the potential to leverage adaptation-mitigation synergies. In accordance with the NDCs, countries will take the lead in NDC implementation for transformative climate action in the agricultural sectors, but the international community must support them in doing so. Well-targeted interventions in the agricultural sectors are uniquely able to deliver adaptation and mitigation benefits, as well as economic, environmental and social co-benefits – often simultaneously.

The 23rd meeting of the Conference of Parties (COP) of the UNFCCC in November 2017 in Bonn concluded with a landmark decision, “Koronivia joint work on agriculture”, to address agriculture and food security in the international climate negotiations. It requests the two Subsidiary Bodies for Technical and Scientific Advice and for Implementation (SBSTA and SBI) of the UNFCCC to work together on issues related to agriculture, taking into consideration the vulnerabilities of the sector to climate change and approaches towards food security. The items mentioned in the decision cover many of the most promising areas for action, including soil, livestock, nutrient and water management as well as the assessment of adaptation, socio-economic and food security dimensions.

FAO is already working with over 40 countries on both adaptation and mitigation related capacity building efforts to identify the priorities and step up from design to implementation, also with regard to leveraging climate finance. One example is the Integrating Agriculture in National Adaptation Plans Programme (NAP-Ag). It is supported by the German Federal Ministry for the Environment (BMUB) through its International Climate Initiative (ICI) with 17 million US dollars as a multi-year initiative to support eleven countries in identifying climate adaptation measures for agricultural sectors and integrating them into relevant national planning and budgeting processes. The programme is being jointly implemented with the United Nations Development Programme (UNDP) and FAO. Thus the programme facilitates adaptation planning in countries in designing, prioritising and implementing adaptation across sectors via the NAPs and in alignment with the targets set out under the NDCs.

FAO is working on a paper series of regional NDC analysis with focus on agriculture and food security. At COP 23, the organisation launched the analysis for Eastern Africa in this context. It showed that all 18 countries in Eastern Africa highlight the key climate-related hazards, impacts, vulnerabilities and the adaptation measures and actions relevant to the agriculture and LULUCF sector. Most countries report on observed and projected changes in meteorological variables, namely fluctuations in mean annual and seasonal land surface air temperature, changes in precipitation intensity and variability of rainfall regimes. Droughts and floods are referred to as major observed and projected climate-related hazards. Countries further report on how climate change exacerbates already existing vulnerabilities, such as economic dependence on agriculture sectors, poverty and low human development. Countries report on observed effects of past and recent climate trends, as well as on projected impacts mainly on human health and life incidence, agricultural productive assets and livelihoods and human settlements and infrastructure.

On a global scale, FAO has established a Thematic Working Group on Agriculture, Food Security and Land Use under the NDC Partnership (see article "Climate action – time to walk the talk"). The working group seeks to facilitate a peer-to-peer network for countries and international organisations to exchange and consult regarding knowledge, experiences and needs on climate change impacts and challenges in the agricultural sectors. It pursues the overall aim of supporting the implementation of NDCs related to agriculture, food security and land use, and strives to explore opportunities of transformational change and paradigm shift in the agricultural sectors. At COP 23, Germany’s Development Ministry (BMZ) pledged one million euros to support this Technical Working Group.

FAO also started to develop a knowledge exchange platform for the agricultural sectors to enhance pre and post 2020 action and ambition addressing agriculture and food security under a changing climate and in their NDCs. The hub will provide information facilitating access to knowledge, tools and partners supporting climate action in the agricultural sectors. At COP 23, Germany also announced additional finance for FAO to the tune of 0.5 million euros from the German Federal Ministry of Agriculture (BMEL) to support the platform. As a result, a network of countries will increase and enhance knowledge and lessons learned to pursue a climate resilience pathway of agricultural sectors by using the platform.

FAO is working closely with countries, UNFCCC and partners by providing technical input, tools and mechanisms in support of the COP 23 decision referred to as “Koronivia joint work on agriculture”.

THE NDC EXPLORER
In a joint project, scientists of the German Development Institute (DIE), the African Centre for Technology Studies (ACTS) and the Stockholm Environment Institute (SEI) have analysed all submitted Nationally Determined Contributions (NDCs). Based on the results, and in co-operation with the UNFCCC secretariat, they have developed a publicly accessible database concentrating all the information. Broken down into 60 subcategories in the areas of “mitigation”, “adaptation”, “finance and support”, “planning and process” and “broader picture”, the ambitions and priorities of the individual countries can be scrutinised in detail with the NDC Explorer. https://klimalog.die-gdi.de/ndc

Julia Wolf is a Natural Resource Officer at the UN Food and Agriculture Organisation (FAO).