Traditional definitions of urban and rural territories do not capture the complexity of different land use changes and realities. The connection between urban and rural areas is crucial to sustainable development, especially in fast growing economies, which has to be addressed in public policies. The Land Use Planning and Management (LUPM) project in India aims to improve the system of land use planning through a regional planning approach.

Like any other natural resource, land is limited. With high growth rates of population, economy and industrial development, pressure on land increases, and the distribution, use and management of land becomes a challenging task. This is apparent in and around urban areas, where borders between rural and urban become blurred. New approaches need to be taken into account in spatial planning in order to meet the changing demands in administering city regions, controlling development and providing infrastructure.

In India, approximately 2.2 per cent of the overall global geographical area accommodates about 18 per cent of the world’s population. Tremendous pressure has been put on land as a result of increasing population growth and rapid urbanisation. Growth occurs not only in megacities such as New Delhi or Mumbai. The population is also constantly increasing in the fringes of most of the Indian cities. The reasons for this are better access to information technology, better roads, higher levels of education and changing economic realities. Not only does growth pose challenges for food security, but it also threatens the flora and fauna surviving in an already limited number of hotspots as settlements sprawl unplanned in the countryside.

While the problem of bursting cities in India is well known and the cities’ governments are already implementing urban planning strategies to manage growth, there is a gap between urban and rural administration in terms of mandate and capacities for spatial planning. Whereas the global debate on urbanisation often focuses on big cities, the process has in fact been happening mostly in the continuum of rural areas with villages, towns and cities of fewer than 500,000 inhabitants. Approximately 1.3 billion reside in provincial towns and small and medium cities, most of which are closely linked to their surrounding rural areas through their economies and labour markets, social networks, culture and the proximate environments they share.

Thus, growing peri-urban areas or rural areas and cities are interdependent and interconnected. Although peri-urban agglomerations have urban characteristics, they are not classified as such and thus lack institutional structures and capacities to address, amongst others, infrastructure planning and service provision. Rural local bodies are administered without the mandate for spatial planning, and therefore without any planning capacity.

The result is visible in the newly developing outskirts of the cities, where no spatial pattern is followed and development is steered by land ownership rather than by a spatial development strategy. This has consequences for the people living in these areas, such as a lack of adequate basic needs services like fresh water, sewerage, roads, electricity.

Facing problems at the regional scale

There is a need to rethink the frame within which planning is currently conducted in India as it is becoming increasingly clear that traditional definitions of urban and rural are no longer able to capture the complexity of the different land uses and connections between them. To better manage the challenges that are occurring in India, one must acknowledge the interaction between the urban and the rural constructs. This new territorial reality should be addressed in public policies, as national and local governments play a pivotal role in shaping these change processes and ensuring that future perspectives for (rural) populations are created.

The effect of the urbanisation trends must be handled as a supra-local interest as cities can have on the one hand a positive impact on the rural areas and their development but can aggravate land use conflicts, too. To address this, regional plans are one tool and on an appropriate scale to manage the side effects of the current development.

The regional planning approach is not new. In India, it has been applied mostly in Metropolitan Regions such as Delhi and Mumbai. Also, a few states, such as Kerala and Goa, have implemented regional plans at district level, including both urban and rural areas. A regional plan summarises the governmental sectoral and inter-sectoral development and minimises possible land-use conflicts within a region, including the urban and rural parts. A comprehensive regional plan involves all sectors and stakeholders (settlements, infrastructure, agriculture, mining, industries, commerce, etc.) and enables these to make spatially informed decisions.

The vision of the “New Urban Agenda”

In the southern state of Tamil Nadu, the government already realised the need for regional planning in 1971 when the Town and Planning Act was passed with a section on regional planning. Regions were defined, but neither a Regional Plan nor a Regional Planning Authority are in place yet. The government has decided to revisit the Regional Planning Approach Act since 2016 as part of the Land Use Planning and Management (LUPM) project supported by Deutsche Gesellschaft für Internationale Zusammenarbeit (GIZ). Also in the eastern state of Odisha, the government acknowledges the need for regional planning despite the fact that there is no such provision in the Act. Therefore, the Government of Odisha chose the district level to demonstrate spatial planning at regional scale in a normative and systematic way. Both of the states thus contribute to achieving the vision of the “New Urban Agenda” by integrating urban and rural functions into national and sub-national spatial frameworks. Developing land-use policies in a participatory manner is seen as crucial to strengthen democratic structures through more co-determination at lower levels in political decision-making.

Land Use Planning and Management Project

Under Indo-German co-operation, India's Ministry of Rural Development (MoRD) with its Department of Land Resources (DoLR) and GIZ are jointly implementing the LUPM project. The project is meant to improve the system of land-use planning in order to enable and ensure that institutions apply policies and instruments of integrated spatial and land-use planning. The project has identified Odisha and Tamil Nadu as two pilot states. In these two states, different scales of governance, from state level to local level, are taken into consideration.

At state level, a land-use policy is being developed. The aim here is to include all spatially relevant government sectors with their respective policies and come up with mechanisms of conflict resolution and better co-operation between sectors. One example is roads departments on one hand and forest departments on the other. The policy on forests provides a goal of extending forest cover in the state, although no land is available for that purpose. Roads departments need to take care of noise emission when building new highways. The effective utilisation of the space for roads can be managed through co-operation between these departments.

At the same time, a manual for the preparation of regional and district plans is being developed in parallel to the preparation of demonstration plans. The manual provides a toolkit of instruments and guidelines for regional planning and complements already existing guidelines for urban planning. Demonstration areas are taken as living examples and showcase specific challenges in preparing the plan. In this context, a focus is put on planning tools beyond urban areas. A region consists mostly of rural areas with few urban centres. For a comprehensive planning system, spatial planning in rural areas is required to be strengthened in order to transfer benefits of land-use planning also to the rural population. Thus, capacity development modules extend the skillset of urban planners and local authorities in the two states to planning tools especially in peri-urban and rural areas. 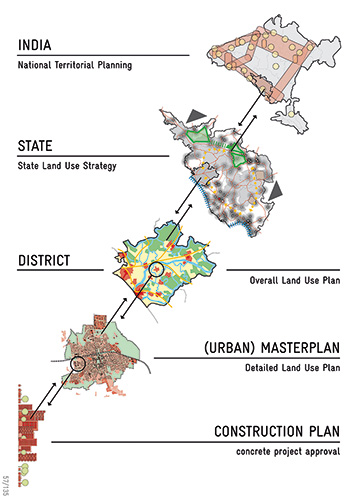 Several lessons have been learnt at various levels which contribute towards bridging the gap between the rural-urban continuum. Currently, planning at the regional level is understood as economic development planning. However, planning is seen as more than the mere allocation of funds. It includes gathering data and creating maps taking account of the economic, social and environmental trajectory of specific areas and working spatial analysis findings into the plan. It is important to link district plans to regional and state development plans to ensure that rural areas are adequately planned for and to create benefits from rural-urban interlinkages.

Spatial planning can also be a leverage for change. Rather than being a restrictive tool, a plan must be communicated as a dynamic, pro-development tool catering to a greater prosperity of all. A strong ownership of the plan through intense public participation can ensure the convergence of “bottom-up” and “top-down” planning. Participation amongst government institutions is as important as participation of people. Multi-stakeholder forums address needs and interests of all land-related government sectors and ensure a balance of these interests. Finally, a key lesson is that planning always happens in circles. It takes considerable time to set up stakeholder involvement, collect data, implement mechanisms of participation, and build the individual and institutional capacities for successful planning. The planning process can be seen as a consensus building spiral, taking different rounds and repetitions in order to achieve solutions which are beneficial for everyone.

Felix Knopf works as Deputy Project Manager in the Land Use Planning and Management (LUPM) in India, where Nina Gräfenhahn is currently interning with the LUPM.
Contact: felix.knopf@giz.de