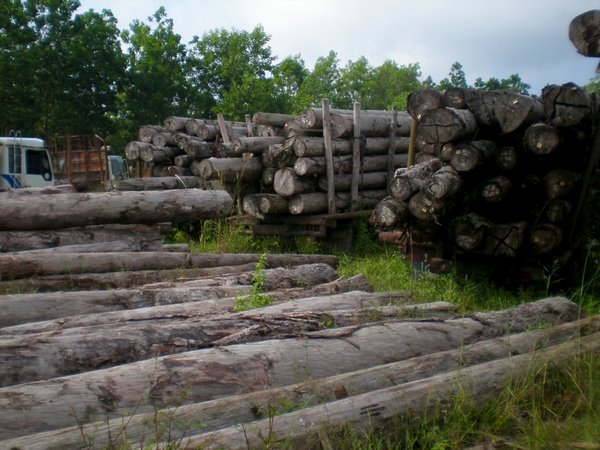 These illegally felled trunks were confiscated by the police in Indonesia.
Photo: © Sofi Mardiah for CIFOR

The report of an international research team illustrates the global consequences of illegal logging for the environment, economy and societies.

Illegal logging and trade in wood cause annual damage of over USD 152 billion worldwide, impacting on the environment, economy and societies. Existing laws and regulations are not enough to constrain existing activities in this area. This is the conclusion of a current report by the International Union of Forest Research Organisations (IUFRO). “Policy has to take into account the three most important dimensions of the problem in order to be effective: informal logging, formation of criminal networks, and the conversion of forest to agricultural land,” says Prof. Daniela Kleinschmit of Freiburg University’s Faculty of the Environment and Natural Resources, the lead author of the report, which over 40 researchers worldwide contributed to.

The report shows that trade agreements between individual countries aiming at ensuring a legal origin for wood have resulted in the illegal trade moving to other less-regulated markets. For example, China and India are currently the largest importers of illegally traded tropical wood, while Russia is the main source for illegally-traded wood from boreal and temperate forests.

One billion people depend on income from forestry

The report also describes what the researchers see as the three primary dimensions of the phenomenon. Around one billion people worldwide depend on income from forestry for their livelihood, while at the same time around 86 per cent of forest area is in public ownership. The conclusion is that informal logging by small producers is growing in importance. At the same time, increasingly well-organised criminal networks are forming, some of them involved in financing war and armed conflicts. Estimates also suggest that around one-third of the illegally traded tropical wood comes from forests which are being converted – also illegally – to agricultural land, which is then used to grow export-oriented products such as palm oil, soya beans or beef.

The researchers conclude that more international cooperation is required to constrain illegal logging and trade in wood. “We also want to collect more data, to get a clearer picture of the dimensions of the problem,” Kleinschmit says. “This will give us a basis for policy-makers to take suitable measures to reduce the ecological, economic and social damage as far as possible.”