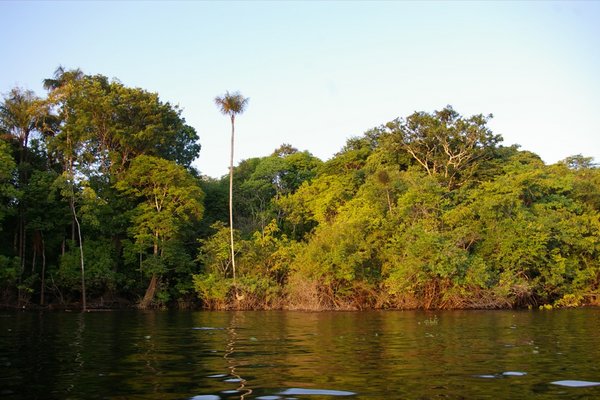 The Amazon forest has been listed as one of the tipping elements of the Earth system.
Photo: © Nao Lizuka/ flickr.com

Vicious circle of drought and forest loss in the Amazon

Logging that happens today and potential future rainfall reductions in the Amazon could push the region into a vicious dieback circle. If dry seasons intensify with human-caused climate change, the risk for self-amplified forest loss would increase even more, an international team of scientists finds.

The Amazon forest has been listed as one of the tipping elements of the Earth system. Large-scale vegetation shifts resulting from reduced rainfall probably occurred in glacial times and might do so under twenty-first century climate change in combination with increasing deforestation, logging and fire.

“We already know that on the one hand, reduced rainfall increases the risk of forest dieback, and on the other hand, forest loss can intensify regional droughts,” says lead-author Delphine Clara Zemp, who conducted the study at the Potsdam Institute for Climate Impact Research (PIK), Germany. “So more droughts can lead to less forest leading to more droughts and so on,” she adds. “Yet the consequences of this feedback between the plants on the ground and the atmosphere above them so far was not clear. Our study provides new insight into this issue, highlighting the risk of self-amplifying forest loss which comes on top of the forest loss directly caused by the rainfall reduction.

”The study  “Self-amplified Amazon forest loss due to vegetation-atmosphere feedbacks” was conducted by the  German-Brazilian Research Training Group on Dynamical Phenomena in Complex Networks at (IRTG1740), hosted by Humboldt University Berlin/Germany.

Under a dry-season halving of rainfall, at least ten per cent of the forest might be lost owing to self-amplification effects alone, adding to the substantial direct forest losses from reduced water availability. Computer simulations built by the scientists suggest that this already happened in the Amazon about 20,000 years ago, in accordance with evidence from the Earth’s past. Still, the scientists stress that the uncertainties are considerable. Taking into account the puzzlements of the vegetation-atmosphere feedback, self-amplified forest dieback could amount up to 38 per cent of the Amazon Basin. In combination with the direct effects of the droughts, most of the Amazon forest might in fact eventually be at risk.

Strikingly, the huge tropical woods produce much of the water they need themselves by evaporating moisture which then rains back onto them. “The Amazon water cycle is of course pure physics and biology, but it is also one of nature’s great wonders,” says co-author Henrique M.J. Barbosa from Universidade de São Paulo, Brazil. “As powerful as the cycle is, it is also surprisingly susceptible to environmental changes – and humankind is imposing massive perturbations on Amazonia both by cutting down the trees and heating up the air with greenhouse gases, which reduces large-scale moisture transport and precipitation, and ends up affecting even the untouched patches of the forests.”

Even if average rainfall is stable, extended dry periods increase the risk of tipping

“Today, the wet season is getting wetter and the dry season drier in Southern and Eastern Amazonia owing to changing sea-surface temperatures that influence moisture transport across the tropics,” says Anja Rammig of Technical University of Munich (TUM) and PIK. “It is unclear whether this will continue, but recent projections constrained with observations indicate that widespread drying during the dry season is possible in the region.”

Even if average rainfall might not drastically change, extended drought events might tip parts of the Amazon forest into self-amplifying forest loss, eventually turning them into a savannah. “Projected rainfall changes for the end of the 21st century will not lead to complete Amazon dieback,” says co-author Carl Schleussner of the Berlin-based scientific think tank Climate Analytics and PIK. “But our findings suggest that large parts of it are certainly at risk.”

Interestingly, the more diverse the Amazon vegetation is, the less vulnerable it seems to be.  Diversity has the potential to decrease the effects of self-amplified forest loss. “Since every species has a different way of reacting to stress, having a great variety of them can be a means for ecosystem resilience,” says Marina Hirota of the Federal University of Santa Catarina, Brazil. “Preserving biodiversity may hence not just be about loving trees and weeds and birds and bugs; it may also be a tool to stabilise key elements of the Earth system.”