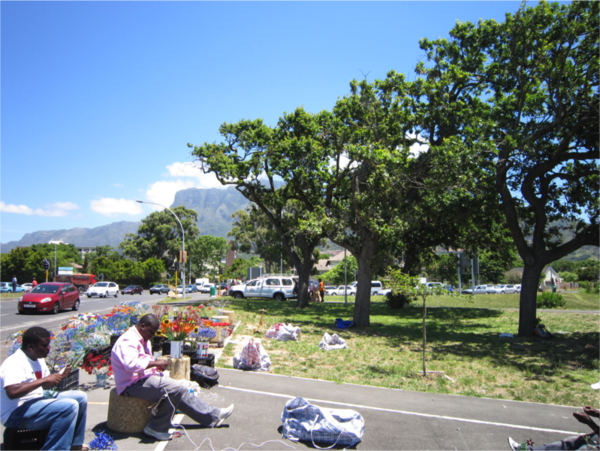 Like here in South Africa’s capital of Cape Town, samples were taken from heartwood in trees from metropolises.
Photo. © TUM

Trees in metropolitan areas have been growing faster than trees in rural areas world-wide since the 1960s, a study on the impact of the urban heat island effect on tree growths shows. Trees in urban areas have already been exposed to changing climatic conditions for a longer period than those in rural environments.

A study conducted by an international team of scientists led by Technical University of Munich (TUM ), Germany, shows that the growth of urban trees has already been exposed to changing climatic conditions for a long period, which is only just beginning to happen for trees in rural areas. This is the first time that an analysis has systematically examined the growth of urban trees world-wide for trends resulting from changing environmental conditions.

“While the effects of climate change on tree growth in forests have been extensively studied, little information is so far available for urban trees,” said Professor Hans Pretzsch from the Chair for Forest Growth and Yield Science at TUM, who headed the study. It was published in the journal Nature Scientific Reports.

A central motivation for Pretzsch’s team is the prevailing trend towards global urbanisation. According to calculations by the United Nations, the urban population world-wide is expected to increase by more than 60 per cent by 2030 – with a continuing upward trend. Urban trees already improve the climate in cities and contribute to the well-being and health of city dwellers, and these forecasts show that their significance for the quality of life in cities will increase even further in the future.

Heartwood samples from the metropolises of Berlin, Brisbane, Cape Town, Hanoi, Houston, Munich, Paris, Prince George, Santiago de Chile and Sapporo were collected and analysed. The cities were selected to cover different climate zones. In total, the TUM research team focused on almost 1,400 mostly mature trees. A typical and predominant tree species was selected for each city and examined in both the city centre and surrounding rural areas.

“We can show that urban trees of the same age are larger on average than rural trees because they grow faster,” said Pretzsch. Further observation showed that the relative difference in size between urban and rural trees decreases with increasing age, but still remains relevant. “While the difference amounts to about a quarter at the age of 50, it is still just under 20 per cent at a hundred years of age.”

The researchers believe that the growth acceleration of urban trees is due to the so-called heat island effect. This effect leads to a stronger heating-up and thus higher temperatures in urban centres. Compared to the surrounding rural area, this increase in temperature can amount to between three and ten degrees Celsius. Higher temperatures can increase the growth of trees in two ways. While they stimulate photosynthetic activity, they also prolong the vegetation period, which extends the time of the year during which trees can grow.

However, the initial positive effect is also accompanied by accelerated aging of the trees. According to Pretzsch, accelerating the life cycle may mean that city administrations will have to replace aging and dying trees sooner.

Regardless of the growth advantage of urban trees, the study also shows that both urban and rural trees have been growing faster since the 1960s as a result of climate change. This observation reflects a pattern that has already been reported for forest trees in comparable international studies.

“In this context, in addition to global warming, fertilisation effects due to the rising atmospheric CO2 concentration and increased nitrogen depositions are discussed as potential driving forces,” Pretzsch explained.

As urban and rural tree growth seems to be converging more and more, this could indicate an imminent limit. “We believe this to be the case because urban trees experience a kind of early-onset climate change brought forward by the heat island effect,” said Professor Pretzsch. “In a current study, we are trying to uncover these mechanisms in order to identify problematic side effects.”