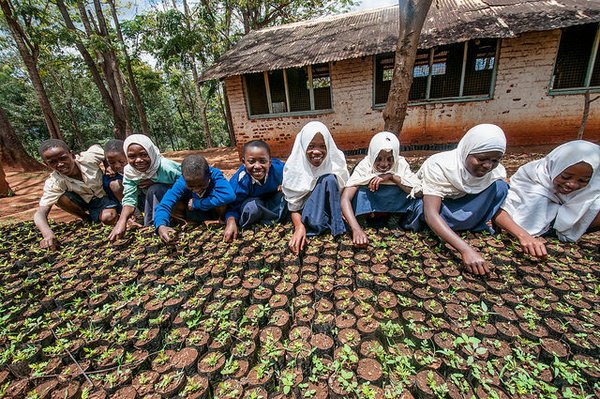 Tree cover on agricultural land has a positive impact on soil health, authors of a recent study say.
Photo: © CIAT

If carbon from trees grown on agricultural land was well accounted for, total carbon estimates for agricultural land would be more than four times higher than they currently are, say an international team of scientists in the study “Global Tree Cover and Biomass Carbon on Agricultural Land: The contribution of agroforestry to global and national carbon budgets”. The study was published in the international research journal “Nature” in late July.
“This is good news, and it is getting better,” says Deborah Bossio, co-author of the study and Director of Soil Research at CIAT, the International Center for Tropical Agriculture. Between 2000 and 2010, tree cover on agricultural land increased by three per cent, resulting in a 4.6 per cent increase in biomass carbon globally. Yet while the importance of carbon stored by forests is widely recognised, carbon stored by trees on agricultural land has largely been ignored.

According to the authors of the study, the soil organic carbon pool is enormous, and is estimated to be two to three times larger than the amount of carbon in the atmosphere. The additional carbon that can be stored as soil organic matter is also huge – up to 1.2 Gigatons per year in top soils on agricultural lands alone. So this is another unexploited, under-appreciated carbon sink.
But until recently, with the launch of the “4 per 1,000” initiative by the French government to promote carbon sequestration in soils for food security and climate, the mitigation potential of sequestering carbon in soils was rarely discussed in policy circles.

This is despite the fact that the potential to sequester carbon in agricultural soils is estimated to be almost twice that sequestered by trees on agricultural lands annually over the last ten years, according to the study.
“What’s happening below ground when we plant trees on farms is arguably more important than what we see above ground,” says Bossio. “Through their roots and litter, trees increase soil organic matter and improve soil health, making farming systems more resilient to climate extremes. In the landscape, trees protect soils from erosion, preserving fertile topsoil, and farm productivity.” She believes that the benefits of increasing tree cover on agricultural land therefore go far beyond carbon sequestration – particularly because of the potentially positive impacts on soil health.

Soil conditions such as moisture content, temperature and nutrient levels – all improved by tree cover – are major controlling factors influencing agricultural productivity, and regional and household food security.
Since trees are also relatively permanent, their biomass contributes to a build-up of carbon over the long term, which has other beneficial impacts on soil fertility, stabilising wider ecosystem health, which is especially important in changing climatic conditions.

“However, we should not underestimate the task at hand to sequester more carbon in our soils,” Bossio notes. “In most agricultural systems, we are swimming against the tide: we are currently losing carbon every year, especially from peat soils.
“And as with all climate mitigation strategies on agricultural land, it’s important to remember that there may be downsides to planting trees, or other carbon sequestration interventions, which is why farmers are not doing it already. She warns that if trees replace food production, or if soil carbon storage locks up nutrients rather than cycling them, farmers could in in fact lose out.

The authors of the study note that there are different ways to increase carbon stocks in agricultural lands: by changing farm management within a system, or by changing from one land use to another, e.g. from grassland to forest.
Each of these options can affect the amount of carbon released or sequestered and the products from the land, and different practices need to be tested for site-specific relevance.
Further research is needed to identify drivers of change at regional, national and sub-national scales, and to develop policies that enhance carbon sequestration on agricultural land which benefit farmers and society as a whole, the authors say.

4 per 1000 initiative – soils for food security and climate