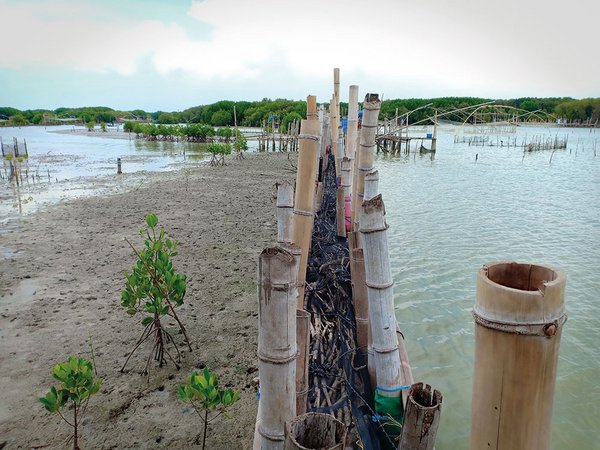 The Vietnamese and Indonesian types of silvo-aquaculture with mangroves produce mainly shrimp, but also some timber. These integrated or mixed systems do not provide most of the services which mangrove ecosystems offer. In Java, farmers tested the system of Associated Mangrove Aquaculture, an alternative practice inspired by those adopted in Colombia and the Philippines – with promising results.

In Rural 21’s recent issue, The land-sea interface (01/22), four articles referred to integrated mangrove aquaculture systems as an option to improve the sustainability of traditional coastal shrimp culture. Since about 1980, such mixed systems, also called silvo-aquaculture systems with mangroves (SAM), have been practised mainly in Indonesia and Vietnam (see left Photo). In these systems, the mangroves are planted either on one large platform (separated) or on several parallel narrow platforms (mixed), respectively, in a pond separated from the shrimp pond or within the same pond (see right Photo). In Indonesia’s most commonly practised SAM, the trees are planted only on the dykes of the ponds, and although they provide timber and habitat for birds of prey as well as snakes, after major floods, most dykes disappear, and the tree roots do not trap sediments. In a review of SAMs, we found that none of the above designs contribute to coastal protection, biodiversity or habitat for marine species. In all the above systems, designed to produce timber, the mangroves are not submitted to the daily tides, and the water going out of the ponds is filtered with nets to keep the shrimp, fish and other marketable products inside them.

Young mangrove trees on the platforms within the aquaculture ponds provide some shade and shed only a few leaves, which decompose and become natural feed for the shrimp. But shading from older trees hampers growing of the pond’s own natural shrimp feed, and the many fallen rotting leaves deplete its oxygen and produce toxic ammonia, making the water unfit for shrimp.

As the mangroves in the above-mentioned SAMs are used for timber, the main species planted is Rhizophora apiculata. This is not a good choice for aquaculture because the tree’s leaves have low nitrogen content, which hampers nutrient recycling due to the high carbon-nitrogen ratio, and thus results in poor water quality. In Bangladesh, Rahman Khandkar-Siddikur and colleagues (2020), together with farmers, ranked more appropriate species for SAMs, such as Sonneratia apetala and caseolaris, Avicennia officinalis, Bruguiera sexangula and Heritiera fomes.

Our above-mentioned review found that in SAM with mangroves inside the pond, owing to poor water quality, the shrimp yields remained below 400 kg per hectare. While farmers also earn from timber and other products, they need at least six hectares of silvo-aquaculture farm to maintain a fair livelihood. Most farmers, however, have less than two hectares. In contrast, surveys in the Philippines have shown that farmers harvest about 6,000 kg per hectare or 15 times more in sustainably managed green-water ponds with tiger prawn (Penaeus monodon). Nevertheless, the average net margin from these green-water ponds mostly remains lower than the total economic value of intact mangrove forests (see Box).

The total economic value (TEV) of mangrove forests varies depending on their share of ecosystem services. These services include timber and fruits, habitats for breeding and nursing marine fish, sedimentation and flood regulation, and tourism.

A survey by Mankay et al. in South Minahassa Regency/ North Sulawesi shows that the TEV of mangrove was 36,000 USD per hectare, which is about the average found globally.

To contribute to coastal protection, biodiversity and habitat for marine species, a silvo-aquaculture with mangroves should provide the main ecosystem services attributed to mangrove forests (see Box). Our review proposed an ecosystem design that can provide these services: Associated Mangrove Aquaculture or AMA. It is based on SAMs described by Primavera (2012) and Gautier et al. (2001) for the Philippines and Colombia, respectively. In the Philippines, these systems emerged after the government banned the cutting of mangroves along the coast in 1982, and in Colombia to counteract the abrasion along the Caribbean coast. In both cases, the aquaculture farms are located behind a wide mangrove greenbelt, separating, i.e. protecting the farms from sea or river.

To create an AMA, the pond is split in two sections: one for aquaculture activities and the other, along the waterway, for the mangroves. Once the new dike separating the two sections has settled, farmers can neglect maintaining dike and gate along the river. Recently, in the Demak district of Central Java, over 100 farmers tested this alternative design, AMA, under guidance of the project Building-with-Nature-Indonesia (BwNI). Those farmers had volunteered after a training in Aquaculture Field Schools (see Box at the end of the article).

To prevent planting failure and disturbance of restoring the mangrove habitat, BwNI told farmers not to actively plant mangroves but to wait for natural recruitment to occur. Without planting, within one year, more than 10,000 mangroves were recruited naturally in AMA’s mangrove section measuring on average 1,500 m2. Two thirds of these mangroves were still seedlings shorter than 1 m, but one third were taller saplings. Most recruits were Avicennia marina, a pioneer; Rhizophora dominated among the 20 other species. Mangrove recruitment fluctuated according to season and locations, and depended on the duration and timing of opening the gate and on proximity to the river, but not on the water level in the mangrove section. In the latter section, on average, 10 cm of sediment accumulated in one year. The quantity of sediment was about the same in the ditches as that on the platform.

Catch and value of fishery in both the AMA and the nearby estuary improved after recovery of mangroves in AMAs. In the first year, the farmers lost most of their stocked fish because of floods, but the higher volume and value of the catches in the netted gates compensated their financial losses. As in AMAs, pond water quality is not limited by shading and falling leaves, so that the ponds can be managed more intensively. Moreover, thanks to higher ecological qualities, the financial risks of shrimp culture in AMA are much lower than that in intensive monoculture. Thus, in AMA, the shrimp yield can become identical to that in the above-mentioned intensive green-water farms.
Hence the mangrove section, covering 10–20 per cent of the AMA, already provides ecosystem services that are crucial for climate change adaptation. AMA’s accumulated economic values can contribute more to national economies than tiger prawn monoculture.

A preliminary social cost-benefit analysis confirmed that BwNI’s innovative approach is beneficial in the long term. Instead of losing land, an investment of less than 1,000 US dollars per hectare in permeable dams for coastal mangroves (see Photo) gives a more than 100-fold return over 25 years. The return on a similar investment in AMA and aquaculture is close to 40-fold over 25 years. Investing in both greenbelts and aquaculture gives an even higher benefit than the sum of the individual actions taken. While rehabilitating coastal and riverine mangrove forests contributes to climate change mitigation, making space for mangroves along the waterways and allowing them to interact with the waterflows and its tides are crucial in achieving climate change adaptation.

Building with Nature Indonesia (BwNI) is a programme by the network Ecoshape, the NGO Wetlands International and the Indonesian Ministries of Marine Affairs and Fisheries (MMAF) and Public Works and Housing (PU). It received financial support from the Dutch Sustainable Water Fund and the German Federal Ministry for the Environment, Nature Conservation and Nuclear Safety (BMU).

The learning process from Aquaculture Field Schools (AFS) was developed by the Blue Forests Foundation. It inspired on the Farmer Field Schools for Integrated Pest Management that the UN Food and Agriculture Organization (FAO) started in the 1980s. During 12 to 16 half- or full-day sessions in one production cycle, farmers learnt, among others, aquatic ecology and pond management with low external input sustainable aquaculture (LEISA). The AFS programme aimed for dominance of vulnerable households and equal gender participation; the first was easy to reach, but the second needed an extra round of female-dominated schools.

The gross margin of the Agriculture Field School alumni who adopted LEISA was estimated to be more than 900 USD per hectare and year higher than that of non-adopters, and more than 700 USD/ha/year higher than the margin found before the project had started. Owning an average of about two hectares of ponds, farm households using LEISA gained around 1,400 USD more each year. The internal rate-of-return of BwNI’s AFS programme was more than 130 per cent, meaning that the project’s investment was recovered within one year. Widowati et al. (2021) showed that such a high return is rarely reached by agriculture innovations.

For more information and guidelines on building AMAs, see: indonesia.buildingwithnature.nl

Roel H. Bosma has worked in rural development, education and farming systems research projects in several African and Asian countries, and at Wageningen University in the Netherlands. In his latest jobs, he focused on sustainable co-existence of people, mangroves and aquaculture in the land-sea interface.
Contact: roel.bosma(at)xs4all.nl

The author is grateful to the farmers who gave their feedback and data, and to the BwNI team members from Wetlands International, University of Diponegoro, Ecoshape, Deltares and Blue Forests.