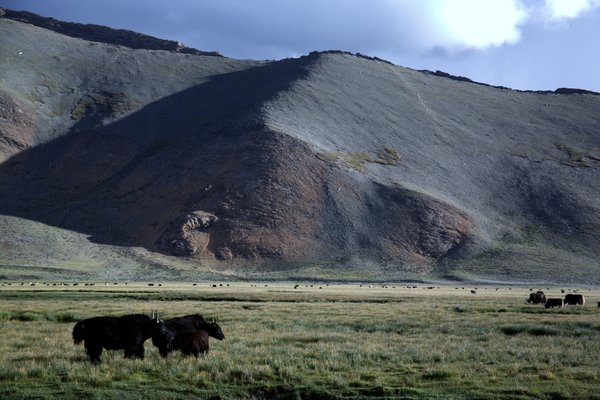 Grazing Yaks on swampy pastureland near Lhazê in South Tibet. The hillsides in the background are highly degraded.
Photo: © Lukas Lehnert

In a survey on changes in pastureland on the Tibetan High Plateau, German scientists have concluded that global climate change is causing more damage to the grasslands than increasing land use. The Tibetan Highlands are a key region for the climate.

Scientists at Germany’s Philipps University of Marburg and researchers of the “Senckenberg Gesellschaft für Naturforschung” have examined changes in the pastureland of the Tibetan High Plateau. Their study, recently published in the specialist journal “Scientific Reports”, arrives at the conclusion that all in all, global climate change is causing more damage to the grassland than growing land use.

With an area of 2.5 million square kilometres, the Tibetan Plateau is larger than Greenland – pastureland accounts for almost two thirds of what is the world’s biggest high altitude plane. The extensive grasslands store water that feeds Asia’s longest rivers and sustains almost 40 per cent of the world population. Moreover, according to Dr Karsten Wesche of the Senckenberg Museum of Natural History in Görlitz, Germany, the area is a giant carbon sink, which is why the conservation of this grassland area is of considerable importance.
Headed by Marburg’s Dr Lukas Lehnert, the scientists have examined the impacts of climate variability and overstocking on the Tibetan grasslands. “Both these factors are suspected to be causes of degradation – but which of them is really critical on the Tibetan Plateau has so far been unclear,” Lehnert explains.

With the evaluation of a 14-year time series of satellite images and a comparison with climate data, the team of researchers demonstrate in their survey that most of the changes in Tibetan vegetation can be traced back to climate variables, and not to overgrazing. The scientists have also proved that, contrary to common assumptions, the degradation of pastureland is by no means a process progressing over large expanses.

In fact, an increase in vegetation cover has been recorded in the Qinghai region, the north eastern part of the plateau. In contrast, there are clear signs of overstocking in the Autonomous Region of Tibet. Since changes in grazing intensity have not had any significant impact on the vegetation, the scientists assume that shifts in temperature and precipitation levels are the driving force behind the degradation of the grasslands.
“All in all, the positive and negative changes in vegetation are balanced regarding the areas covered,” Lehnert explains, adding that overall productivity has in fact risen because positive changes in vegetation have above all taken place in productive regions.

Even so, the two scientists are not wholly optimistic about developments. They point out that increases in vegetation in individual areas could also be linked to the melting of permafrost soils and a brief improved supply of water for plants. However, they stress that generally, this trend has to be viewed critically since the soils are important carbon stores, and that the gas emitted can in turn add to temperature rise  and hence degradation.

In addition, it is difficult for the scientists to assess what the impacts of global climate change and increasing grazing are going to be like over the coming decades. “In all circumstances, a strong decrease in vegetation ought to be prevented in order to further retain the role of the Tibetan Plateau as a water store,” Lehnert concludes.