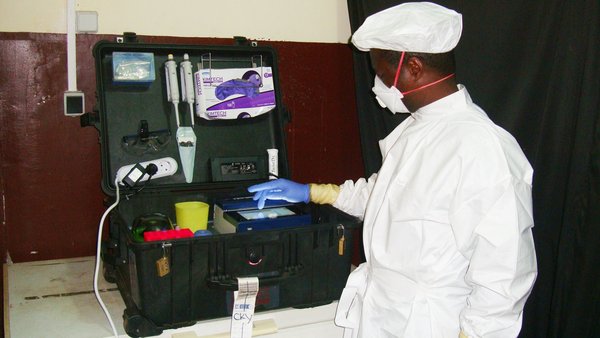 Researchers have tested a new rapid diagnosis method for Ebola in a field trial in Guinea. With the solar-powered mobile laboratory Ebola can already be detected after 30 minutes.

An international team of infection researchers have tested a new rapid diagnosis method for Ebola in a field trial in Guinea, West Africa. The testing procedure was carried out with the aid of a portable suitcase laboratory. The mobile laboratory is solar-powered and enables simple on site diagnostics in remote areas and without the need of fully equipped laboratories.

In the field study, which was carried out in Guinea from March to May 2015, samples of saliva were taken from people believed to have died of Ebola. The scientists compared the new recombinase-polymerase amplification technique (RPA) with two variants of the detection method commonly used, the so-called realtime polymerase chain reaction (PCR).

According to Ahmed Abd El Wahed, a scientist at the University of Göttingen in Germany and at the German Primate Centre, this revealed that RPA works very well with oral swab samples, which greatly simplifies sampling because it is faster and less complicated than sampling blood. Second, the analysis showed that RPA is just as sensitive and specific as the conventional PCR methods, which are based on a far more sophisticated technology.

Out of the 928 oral swabs taken, 120 were identified as positive and 808 as negative using RPA. The reference PCR method used as a control reaction supplied precisely the same results. Both the PCR and the RPA techniques are based on identifying viral RNA in the blood or saliva of infected individuals.

However, unlike in PCR, the RPA agents can be used and shipped at ambient temperature, which makes them cold-chain independent. With RPA, Ebola can already be detected after 30 minutes, whereas PCR usually takes several hours and requires repeated heating up of the samples and constant cooling of the enzymes required for the reaction. This complicates the use of the procedure in remote areas.

The suitcase laboratory can work with solar power for up to 16 hours. “The mobile diagnostics suitcase makes it easier to detect Ebola and other infectious diseases directly in the crisis areas,” says Ahmed Abd El Wahed. In future, the diagnostics suitcase will also be used to detect other infections among humans and animals, for example for paratuberculosis, the dengue virus, the Rift Valley virus and the Chikungunya virus.

The results of the field study have been published in the specialist journal Eurosurveillance.