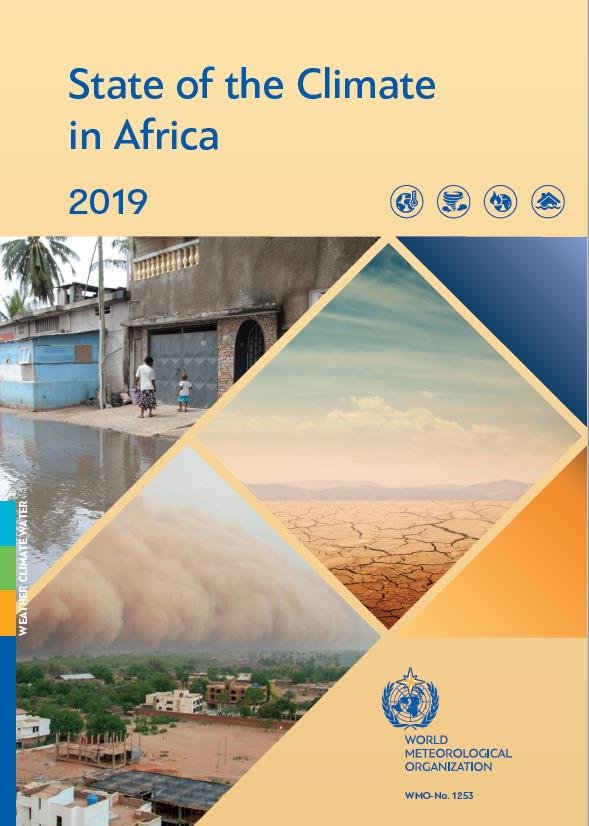 State of the Climate in Africa 2019

This report highlights the urgency of climate action in Africa and the current state of capacity. The risks are becoming more severe.

The State of the Climate in Africa 2019 report, a multi-agency publication coordinated by the World Meteorological Organization (WMO) was published in late October 2020. It provides a snapshot of current and future climate trends and associated impacts on the economy and sensitive sectors like agriculture. The report highlights lessons for climate action in Africa and identifies pathways for addressing critical gaps and challenges.

The year 2019 was among the three warmest years on record for the continent. That trend is expected to continue. African temperatures in recent decades have been warming at a rate comparable to that of most other continents, and thus somewhat faster than global mean surface temperature.

The latest decadal predictions, covering the five-year period from 2020 to 2024, show continued warming and decreasing rainfall especially over North and Southern Africa, and increased rainfall over the Sahel.

Sea-level increase reached 5 mm per year in several oceanic areas surrounding the African continent and exceeded 5 mm per year in the south-western Indian Ocean from Madagascar eastward towards and beyond Mauritius. This is more than the average global sea-level rise of 3–4 mm per year.

Africa is a vulnerability “hot spot” for change impacts

In the drought-prone sub-Saharan African countries, the number of undernourished people has increased by 45.6 per cent since 2012 according to the Food and Agriculture Organization of the United Nations (FAO).

Agriculture is the backbone of Africa’s economy and accounts for the majority of livelihoods across the continent. Africa is therefore an exposure and vulnerability “hot spot” for climate variability and change impacts. IPCC projections suggest that warming scenarios risk having devastating effects on crop production and food security.

Key risks to agriculture include reduced crop productivity associated with heat and drought stress and increased pest damage, disease damage and flood impacts on food-system infrastructure, resulting in serious adverse effects on food security and on livelihoods at the regional, national and individual household levels.

By the middle of this century, major cereal crops grown across Africa will be adversely impacted, albeit with regional variability and differences between crops.

Africa has made great efforts in driving the global climate agenda. This is demonstrated by the very high levels of ratification of the Paris Agreement – over 90 per cent. Many African nations have committed to transitioning to green energy within a relatively short time frame. Clean energy and agriculture are, for example, prioritised in over 70 per cent of African Nationally Determined Contributions (NDCs).

One promising approach - throughout the continent - to reducing climate-related risks and extreme event impacts has been to reduce poverty by promoting socioeconomic growth, in particular in the agricultural sector. In this sector, which employs 60 per cent of Africa’s population, value-addition techniques using efficient and clean energy sources are reported to be capable of reducing poverty two to four times faster than growth in any other sector.

Solar-powered, efficient micro-irrigation, for example, is increasing farm-level incomes by five to 10 times, improving yields by up to 300 percent and reducing water usage by up to 90 per cent while at the same time offsetting carbon emissions by generating up to 250 kW of clean energy.