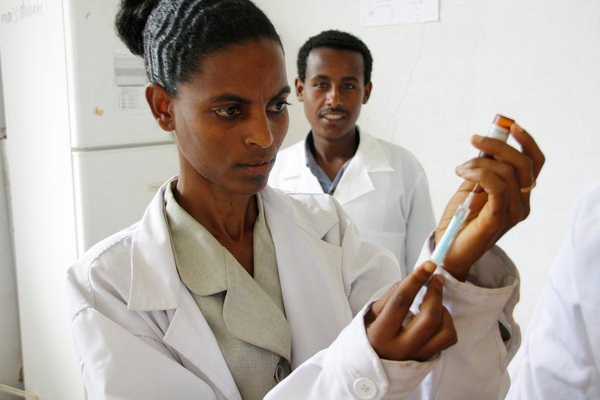 New solutions for research and development (R&D) are needed that could make affordable drugs available to the South.
Photo: DFID

Starting off research on poverty-related diseases

Developing new drugs only makes sense for pharmaceutical corporations if they can later on recapture the high development costs via sales. This is one of the reasons why there is still a large imbalance between the availability of drugs for classical “industrialised country diseases” and those for diseases that affect poor people to a large degree. How can this be changed?

The term Poverty-related and Neglected Diseases (PRND) refers to illnesses that above all have a severe impact in developing countries and for which there is often a lack of drugs to treat them. For example, the deadly effect of the Ebola virus has been known since 1976. But it was only the outbreak three years ago, which resulted in more than 11,000 deaths in West Africa, that led to progress in the search for medical solutions. The vaccine developed towards the end of the epidemic is still undergoing tests. Just now, new Ebola fever fatalities have been reported from the Democratic Republic of Congo.

Numerous other diseases, such as tuberculosis, malaria, African sleeping sickness or onchocerciasis count among Poverty-related and Neglected Diseases (PRND). A local lack of drugs may be due to high prices that the population cannot afford. But the main reason is not enough research world-wide because selling such drugs is simply not profitable.

The Office of Technology Assessment at the German Bundestag (TAB) is publishing a report, “Neue Arzneimittel gegen vernachlässigte Krankheiten”, addressing the issue of neglected diseases. It focuses on new solutions for research and development (R&D) that could make affordable drugs available to the South with which rare diseases could also be tackled.

Research in a catch-22 situation

According to the TAB, it is difficult to put a figure on funding requirements. Owing to different contexts, average values cannot be established. For example, in 2006, the Stop Tuberculosis Partnership estimated an annual demand of 1.8 billion US dollars to cover the costs of prevention, diagnostics, therapy and operative processes needed to halve tuberculosis morbidity and mortality by 2015 (compared to the baseline year of 1990). In 2012, the Consultative Expert Working Group (CEWG) of the World Health Organization (WHO) was reckoning with alone six billion US dollars that would have to be provided annually by the public sector as an incentive for R&D not only to combat PRND but also to cover the specific health needs of poor countries regarding widespread diseases such as cancer or diabetes. The CEWG stressed that this sum was less than ten per cent of current spending on public-funded R&D on health topics and corresponded to a mere 0.01 per cent of the global domestic product. However, by 2013, not a single country had achieved the 0.01 per cent level.

As the TAB report authors point out, research is in a catch-22 situation. If the results are automatically collectivised, there will be no incentive for research as development costs are very high in the pharmaceutical branch in particular. On the other hand, patents can keep the prices of products at an unaffordably high level through the creation of a monopoly. “Currently, it is not possible to reliably assess which form of Open Initiatives will really strengthen R&D on neglected diseases to a significant degree,” the report concludes. Such initiatives may be a patent applying for a short period, the establishment of socially compatible licences, a patent pool or crowd-funding. However, none of them will be free of charge because the authorisation process costs money per se.

In the 1970s, India introduced a law on the national manufacture of generics. With the aid of amendments to legislation on patents, lowered protective tariffs and reducing patentability to technical processes, a national pharmaceutical industry has developed on the subcontinent that can develop generics for already available drugs.

This was very successful in the case of HIV/AIDS drugs. Owing to patent protection, a year of therapy used to cost around 10,000 US dollars. Since India was able to reject the patents at the time and also had sufficient manufacturing capacities, a year of therapy soon only cost 350 USD, while the price of the original drug was now a mere 700 USD. Today, around 80 per cent of antiretroviral drugs come from India.

Industrialised countries such as the United Kingdom, the USA and Germany have PRND capacities. Germany’s Federal Ministry of Research even has its own PRND funding concept. The authors of the TAB analysis recommend a multifactor approach comprising the expansion of PRND capacities in the industrialised countries, the establishment of publicly accessible knowledge and data banks and the development of R&D facilities in the South itself.